“First Shop of Coffee Prince” burst off the screen and into Kdrama fans’ hearts in 2007. Join us as we do episodic reviews that will coincide with when each episode aired 10 years ago.

Side dish: The only dish we could start with is jjajangmyeon. If you’re feeling nostalgic, then you can try Maangchi’s recipe from 2007. If you’re up for something new, here’s a newer recipe from Matt Rodbard, author of “Koreatown: a Cookbook” at Food52.

Flirty chaebol, Choi Han Gyul (Gong Yoo) has been called back home from the US to join the family business and get married. His return coincides with the sudden reappearance of his first love, Han Yoo Joo (Chae Jung Ahn) who wants to reconcile with Han Gyul’s cousin, Choi Han Seong (Lee Sun Gyun). Han Seong continues to hold a torch for Yoo Joo, but resentfully refuses to forgive her for leaving without notice.

The only time Han Seong appears to smile is when the milk delivery woman howls along with his dog. During a temp job at a wine bar, Eun Chan recognizes Han Seong as the friendly dog’s owner, and chats with him.

Han Gyul and Eun Chan meet when she intervenes in a purse snatching involving Yoo Joo. Once she realizes that the thief is her sister’s hapless suitor, Min Yeop, she lets him escape. Han Gyul accuses Eun Chan of being a criminal collaborator, but Yoo Joo’s gratitude prompts him to offer a reward to Eun Chan.

After getting fired from her delivery job, Eun Chan swallows her pride to ask Han Gyul for the promised money. When Han Gyul insinuates that Eun Chan comes from a criminal family, a livid Eun Chan harasses Han Gyul for an apology throughout his marriage date marathon. Inspiration strikes when Eun Chan asks Han Gyul if he is gay. Mistaking her for a man, Han Gyul proposes that Eun Chan be his lover.

Only 만: A friend of mine recently said that it took a few episodes for her to find Gong Yoo appealing in “Coffee Prince”. Would you agree with that assessment or did you fall for him in episode 1?

Junggugeo Kaenada 중국어 캐나다: I have to agree with your friend, even though Gong Yoo was strutting around with nothing, but a towel on in the first episode. Though, re-watching the show now as a seasoned Kdrama fan, I have hearts for eyes from the start for Gong Yoo. He is just one of the many things I love about this unique Kdrama.

Only: That’s true, though it’s not entirely evident from the get-go. I remember that the first time I watched “Coffee Prince”, it took me a while to get past this first episode and watching it now, I can see why; it feels frantic, and I’m not convinced I like any of these people yet.

Junggugeo Kaenada: What was your initial impression of the leads, Eun Chan and Han Gyul?

Only: Han Gyul comes off like a charming playboy, though not so charming in the story line of the woman who tries to trick him into sleeping with her. That was actually off-putting, however cute he was in a robe.

Junggugeo Kaenada: Han Gyul did come across as a bit of a boor and overly confident. Who says to his mother that he can’t come over, because he’s filthy?! Even she noted that he sounded like a player.

Only: Eun Chan, on the other hand, just seems harried. I did like how convincingly tomboy-ish she was, though I found Yoon Eun Hye’s physical acting a little too broad in certain spots, which was jarring. I mean, I’ve walked around in heels I couldn’t handle before, and I don’t think I was swaying like a drunk à la Eun Chan. 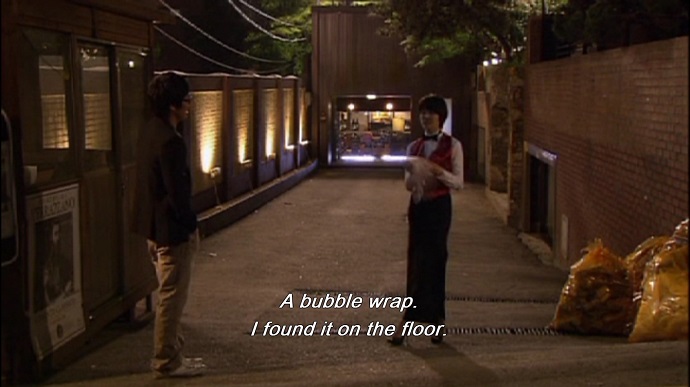 Junggugeo Kaenada: I actually found Eun Chan hilarious in the wine bar, teetering on heels while dancing around with bags of garbage. Plus, I was amazed at her ability to carry a grown man.

Speaking of broad, I found Han Gyul’s blind dates cringe worthy. None of them were biting parodies of the kind of nightmarish dates one would actually encounter. Why was that woman barking at Han Gyul?

Only: I did wonder why those women were so ridiculous. I wish I could even say they were caricatures, but like you said, they made no sense whatsoever. Why was that woman licking her chin?!??

Junggugeo Kaenada: Aside from the parade of weird prospective spouses for Han Gyul, what I found most jarring were the mini scenes and animation, which I suppose were supposed to be whimsical. I’m talking about the animated tally during the jjajangmyeon eating competition, and the random scenes underscoring the points of Han Gyul’s grandmother’s notes while confronting him. Fortunately, these flourishes fell by the wayside in later episodes.

Only: In its favour, this episode was never boring. Like I said, I didn’t find any of the characters that sympathetic, though I did feel bad for Eun Chan, but I liked the light-hearted tone.

Junggugeo Kaenada: I was taken by the slice-of-life quality of the first episode. We saw the streets of Seoul from Eun Chan’s scooter, and the inside of a neighbourhood bathhouse.

I also really liked how dirty this episode was. From Han Seong and Yoo Joo rolling around on the bed together, to Eun Chan being mesmerized by Han Gyul’s crotch. Even as a K-drama novice, I found it unusual, and now, I know it is an anomaly.

Only: It was my first K-drama, so I don’t think I found anything unusual in it the first time I watched. It’s only in retrospect that I’m a little shocked at how bold it seems.

Junggugeo Kaenada: Why did you decide to keep watching past the first episode? It doesn’t sound like it captured you.

Only: It was probably your enthusiasm for the show that kept me going. I recall you repeatedly asking if I’d finished it yet, so I finally gave in and watched something like the next five episodes in one day. I was hooked thereafter, but this isn’t the episode that did it for me.

Junggugeo Kaenada: So, Han Gyul’s provocative suggestion at the very end that he and Eun Chan should be lovers did nothing to pique your interest?

Only: If I’d known what was coming, it would have. In fact, now that I do know what’s coming, it did.

Junggugeo Kaenada: Well, hopefully, there will be a bit more squeeing in our comments on the next episode.