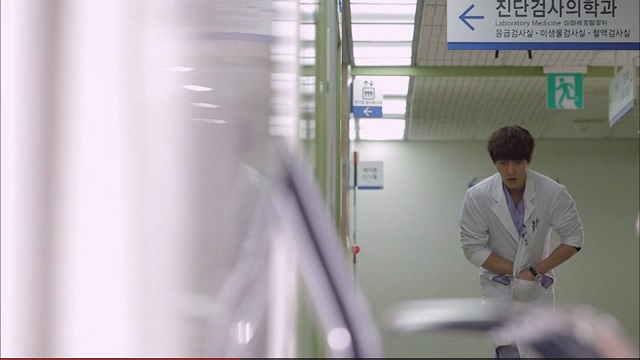 The boner that went nowhere

Side dish: Shortly after watching the last episode of “Emergency Couple”, we comforted ourselves by eating a pain au chocolat from Patisserie 27. Even though we’d bought them much earlier in the day, they were still delicious. If you must watch the last episode, make sure you have equally tasty pastries to keep your spirits up.

Oh Chang Min (Choi Jin Hyuk) and Oh Jin Hee (Song Ji Hyo) are a pair of bickering exes who meet again as interns in a hospital emergency room. They’re supervised by a cranky doctor (Lee Pil Mo) and an awesome resident (Choi Yeo Jin). And then it all goes pear-shaped.

Junggugeo Kaenada 중국어 캐나다: Initially, the main draw of “Emergency Couple” for me, was Choi Jin Hyuk. Having seen him as the intimidating older brother, Won, in “The Heirs”, I was curious to see how he would be ‘wacky’. Otherwise, I was not enamoured with the premise of a medical drama about bickering exes.

Only 만: Choi Jin Hyuk doing comedy was the main draw for me as well, since he never cracked a smile in “The Heirs”. And yet, by the end, I was more enamoured of the second leads, Lee Pil Mo and Choi Yeo Jin.

중국어 캐나다: So, what did the show do right to make it a good series? Not too much medical mumbo jumbo, couples with chemistry, and not too much bickering either.

만: The pacing was great; it rarely dragged, plus I never felt that things were happening too early or too late. And the characters were very consistent, and engaging, if not entirely likeable. Most importantly, it was fun to watch.

중국어 캐나다: Yes, I did laugh out loud a lot.

만: They really nailed the comedy.

중국어 캐나다: The best episode for me was episode 19. Jin Hee was funny and proactive, Chang Min was realistic and in control of himself, and it seemed that the relationship between Cheon Soo and Ji Hye might actually progress to the next level. That is why episodes 20 and 21 were especially disappointing; I had a glimpse into what could have been, and the writers decided to waste that opportunity with lazy writing.

중국어 캐나다: And, you mentioned how the sexual tension pretty much vaporized.

만: It’s like Chang Min went from angry kid to mellow grandpa, so that leached all the chemistry out of that relationship, Jin Hee’s belated peep show notwithstanding.

중국어 캐나다: And, this asexual turn in the last two episodes cannot merely be attributed to the fact that they have become like a happily married couple. Jin Hee and Chang Min were quite playful in the flashbacks. I would have settled for that.

만: Instead we get mature hugs and face smushing kisses. It’s like they ran out of steam. Take the shower scene where Jin Hee has a happy flashback to Chang Min dragging her into the bathroom and having his way with her, for example. In the present, nothing happens, not even a wink.

중국어 캐나다: Another relationship that lost steam by the end was Cheon Soo and Ji Hye. Within one episode, he went from heart broken over Jin Hee, to agreeable with Ji Hye. That’s about all I can say about his relationship with Ji Hye, because their relationship also became asexual.

만: It’s like maturity equals boring. I think the disappointment came because both couples had built up some tension that really went nowhere.

중국어 캐나다: I think they ran out of time with Cheon Soo. He was not given enough time to transition from being disappointed to being open to new opportunities. And, Ji Hye was just neglected in the final two episodes. She pretty much returned to her easy going ways, so Cheon Soo was never challenged to give Ji Hye a second chance.

만: No, he just starts acting like her boyfriend and she goes along with it. And not boyfriend in the fun, sexy sense, but more dutiful. As in, he helps her with the chores, and picks up her parents from the airport.

중국어 캐나다: Yes, and a boyfriend who won’t create any drama to make Ji Hye stay in Korea with him. He rushes to the airport to be amicable.

만: Would some meaningful looks kill them? Maybe even some more ballroom dancing? But I think the issue is that the show purported to portray older, more mature characters, thus sort of baiting us with the possibility of sexiness, and ended up with some friendly smooches, and a smile. Yawn.

중국어 캐나다: What about the supporting characters? There were a lot of them.

만: This is one of the few shows I’ve seen that I really felt had an ensemble cast. And most of them were great! Evil Mom got tiresome, but she was awesome at a certain point. Don’t get me wrong, I don’t want her as a mom, but for a drama? She was great fun. And Jin Ae and Kwang Soo! I enjoyed them, though not as much as Baby Gook.

중국어 캐나다: Yes, Baby Gook. The cutest baby I’ve seen in a K-drama, yet. Though, admittedly, I tend to avoid any drama with too many children.

만: I’m not a huge fan of kid-oriented storylines myself, but that kid was ridiculously cute. I got distracted every time he showed up, even during the mom fight.

중국어 캐나다: Yes, I would have been happy if they just did additional shots of Baby Gook, and laid it over the married interns’ scenes. I hated that couple.

만: I found them uninteresting. I can’t even go as far as hate.

중국어 캐나다: I actually found them offensive, because we’re supposed to believe that they represent a contemporary, young, married, professional couple? Lame. She has a pregnancy scare, because she doesn’t use birth control. Then, the husband is upset when she’s not pregnant, because he doesn’t get his own Baby Gook. Gag.

만: I didn’t get that at all. He seemed surprised that she wasn’t enthusiastic about having a kid during her internship. That’s ridiculous.

중국어 캐나다: That’s grounds for a divorce. Though, come to think of it, I would be disappointed if I was expecting my own Baby Gook, and then had that dream snatched away.

만: Another Baby Gook might have been too much for the universe. We’d all explode into rainbows and lollipops.

중국어 캐나다: The parts of the show that I will look back on the most fondly were the brief instances of inappropriateness.

만: The pee in the face, for example?

만: I remember texting you to confirm that Chang Min had a boner, because I wasn’t sure if that was even possible in a K-drama. I was questioning my own judgement.

중국어 캐나다: We should mention to readers that this Series Review comes later than usual after a finale, because our opinions were so contaminated by the disappointment from the last two episodes.

만: I needed the time to get a better perspective on the series. It’s 21 episodes, and the last two aren’t the whole show.

중국어 캐나다: Even now, our opinions of “Emergency Couple” are influenced by the show that we are currently recapping, “Secret Love Affair”.

만: I think some of our frustrations over the waste of sexual tension might have to do with “Secret Love Affair” having a non-starter of a sex scene.

중국어 캐나다: Enough about “Secret Love Affair”. There will be an opportunity to express our frustration with that show later. For now, what are your final thoughts on “Emergency Couple”, keeping in mind that we are frustrated by its ending, and what we are currently watching.

만: A great show, with fun characters, good chemistry, and a lot of charm that wasted its promise in the last two episodes. It would have all been fine if Baby Gook had just shown up again.

중국어 캐나다: Yes, Baby Gook was conspicuously absent from the last episode. A genuinely funny series with good chemistry between the leads, and some very pretty cinematography. I highly recommend treating episode 19 like the finale, and tying up loose ends with your imagination.