Side dish: We recently ate beef tongue grilled on a hot stone and it was a very fun way to cook meat. The Mongolian recipe is not the same, but it’s sure to be just as delicious: Khorkhog – Хорхог.

It is just another work day for new contract employee, Jang Geu Rae (Im Si Wan) as his boss, Oh Sang Sik (Lee Sung Min) reams him out. Fortunately, Geu Rae is used to the mistreatment, unlike his fellow former interns. An Young Yi (Kang So Ra) suffers the indignity of being the lackey of the Resources team while Jang Baek Ki (Kang Ha Neul) is rendered useless by his. Former site intern, Han Suk Yool (Byun Yo Han) posits that the Resources team is not used to working with women whereas Baek Ki’s team is trying to bring him to heel psychologically.

Director Ma of Resources is reviewing contracts with his team manager, Mr. Jung when he discovers that the original B/L, a receipt for cargo accepted for transportation, is missing. Director Ma gleefully blames Sang Sik for the oversight, and gets Mr. Jung to reprimand Sang Sik over the phone.

After forcing Mr. Jung to come to his office, Sang Sik loudly claims that he gave the original B/L to Mr. Jung two months ago, and Mr. Jung should have claimed responsibility for the oversight. This prompts Mr. Jung to bring up Sang Sik’s responsibility for someone’s death. Sang Sik angrily throws Mr. Jung against a desk, then walks away in a daze while his boss is reprimanding him for committing an assault.

Sang Sik stares at a ready prepared letter of resignation, thinking back to when his subordinate took the blame for the mistake of the current executive director, and was forced to resign. The subordinate started a business with his mother, and was making a delivery when he was killed in a traffic accident. In the aftermath, everyone blames Sang Sik for the man’s death.

Geu Rae learns about this stain on Sang Sik’s past from Suk Yool. Later, he overhears assistant manager, Kim Dong Sik (Kim Dae Myung) pleading with Sang Sik to let it be known that the executive director was the one at fault, and even enjoyed a promotion since the man’s death. Sang Sik is indifferent to who takes the blame since he suffers from the guilt of not having taken responsibility instead of his subordinate.

Sang Sik routinely sings the praises of Young Yi as well as fellow manager, Sun Ji Young (Shin Eun Jung). Yet, both female employees find themselves in a work environment that is routinely hostile towards women. Young Yi becomes the sounding board for misogynistic rants from her superior who questions the work ethic of women. When a female employee collapses after overworking herself while pregnant, both Young Yi and Ji Young must stand by and listen to Director Ma and his team condemn female employees for being selfish and disloyal.

Ji Young is resigned to the fact that a working mother without her husband’s help is blamed by the company, the in-laws and even the child for any failure. She advises Young Yi not to get married, and presumably not to have a child either, if she wants to have a career. 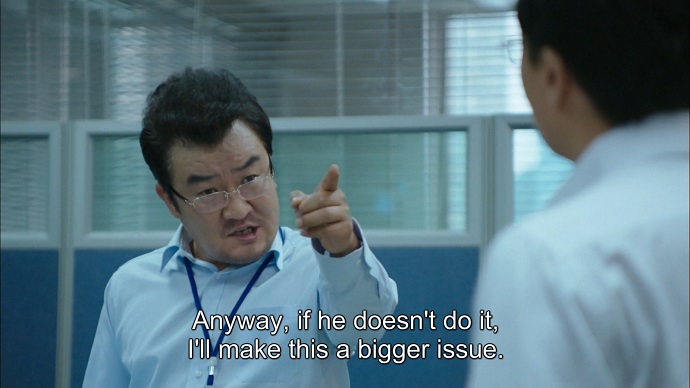 Meanwhile, Director Ma is on a warpath about the missing B/L, demanding a public apology from Sang Sik. At a meeting, a petty Director Ma brings up the topic, then accuses Sang Sik of accepting bribes to sabotage the company. Ji Young raises her objection to this accusation, and is told to be quiet and know her place as a woman.

In response, Sang Sik wonders aloud if the Director is still bitter about Sang Sik’s role as witness in his sexual harassment case. The Director loudly defends himself, blaming the female employee for dressing too provocatively. Before taking her leave, Ji Young pointedly corrects Director Ma by repeating the insult he directed at the female employee.

Director Ma rants against modern women, then asks Young Yi if his actions are sexual harassment. Under scrutiny from all her male colleagues and superiors, Young Yi hesitantly calls it sexual harassment if the target feels that she is being victimized. Director Ma is about to let loose his rage on Young Yi when he is distracted by Sang Sik leaving. Sang Sik loudly agrees to provide the letter of apology demanded by Director Ma.

Two months ago, Baek Ki was an intern in Resources, and he remembers handling the B/L in question. Despite repeat questioning, he denies any knowledge of it to Suk Yool, Geu Rae and Young Yi. Baek Ki refuses to get involved in the conflict, and advises Young Yi to do the same, since betraying her own team will not bode well for her future. 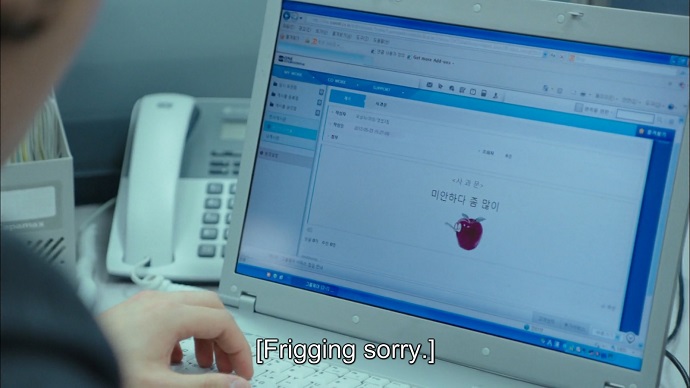 Director Ma had directed Mr. Jung to carefully review Sang Sik’s letter of apology for any mistakes when it was uploaded to the company intranet. It turns out that the scrutiny is not necessary, as Sang Sik’s letter simply consists of the words, “Sorry. Frigging sorry” accompanied by a GIF of a rotten apple.

Sure enough, Director Ma marches into Sang Sik’s office and a physical altercation ensues. Young Yi uses this distraction as an opportunity to access the Resource vault and finds the original B/L that everyone is looking for. Unbeknownst to her, Baek Ki is watching as she returns the original B/L to its place. 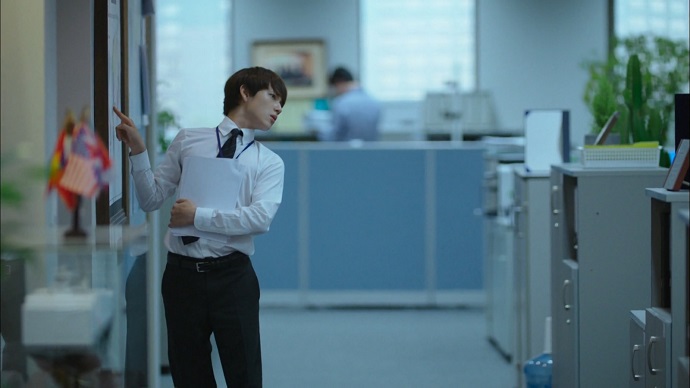 Geu Rae is troubled by the possibility that Sang Sik is covering for his mistake. However, the entire incident precedes Geu Rae’s arrival. Still, Geu Rae seems determined to search Resource records. Sang Sik watches in disbelief as Geu Rae not so subtly loiters around the Resources department.

Young Yi also cannot forget about the original B/L in the Resource files, despite Baek Ki’s warning. While Ji Young is commiserating with Young Yi about the discrimination they face as women, Young Yi asks her if she should do the right thing, even if it causes complications. Ji Young questions whether ignoring the right thing makes things more simple, and encourages Young Yi to follow her conscience, regardless of the troubles she faces as a woman. 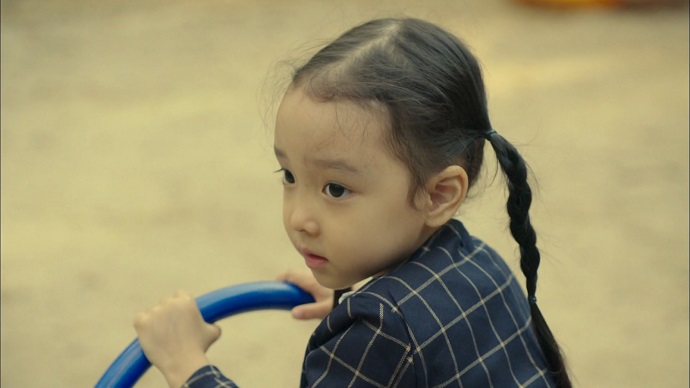 Ji Young is having trouble balancing work and personal life as she and her husband bicker over who will pick up their daughter from daycare. Sang Sik overhears Ji Young postponing her meeting again for her daughter. He is sympathetic to the hardships of the working woman. His own wife quit work as a result of their three children, and now, Sang Sik cannot quit, no matter how much he wants to. After reaming Geu Rae out for his attempt at subterfuge in the Resource department, he sends him to help Ji Young pick up her daughter, So Mi.

At the daycare, Geu Rae ends up taking the sad looking children to the playground, accompanied by a young female teacher, who seems interested in Geu Rae. One by one, the children are all picked up by their parents until only So Mi and Geu Rae are left.

Young Yi goes to meet Geu Rae at the playground to tell him where the original B/L is stored. She takes over the care of So Mi as Geu Rae goes running back to the office. The young teacher returns and is surprised to find Geu Rae gone. Young Yi is equally surprised when the teacher asks for Geu Rae’s phone number.

Geu Rae is rifling through the Resource files, unable to find the original B/L when he is caught by Mr. Jung. While manhandling Geu Rae, Mr. Jung decides to call Sang Sik, who shows up behind them with the original B/L in his hand. Sang Sik forces Mr. Jang to agree to never to bring up the dead employee again, to set the record straight with Director Ma, and to issue a public apology. 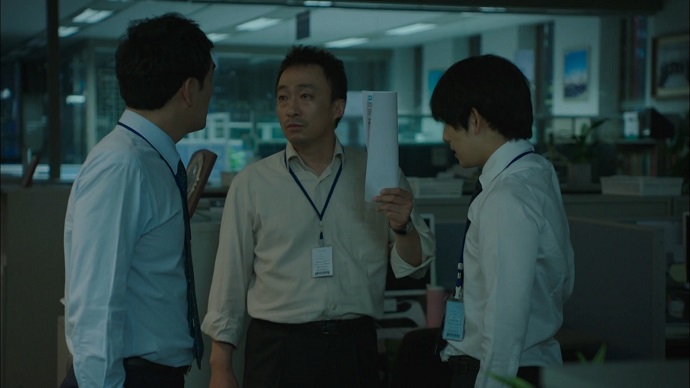 Sang Sik returns to an empty office with only Geu Rae still at his desk. They end up silently having drinks and BBQ. Sang Sik refuses to reveal who told him about where the original B/L was stored. However, it would appear that Baek Ki, concerned about what Young Yi might do, is the informant.

After a long day of work, Ji Young puts So Mi to sleep and does house chores. When her husband finally comes home, they laugh over So Mi’s unflattering portrait of them, in which her father is sleeping and her mother is faceless. The next morning, Ji Young is about to leave So Mi at the daycare when she ends her business call to look back. Ji Young realizes how often her daughter has seen nothing more than the back of her head and tearfully returns to hug So Mi, asking her to draw another picture of her.

Sang Sik wakes up to his happy family after a hard night of drinking. He is rushing out for work when he finds Geu Rae wedged against his front door, having passed out after seeing Sang Sik safely home. Sang Sik’s wife and three sons laugh at Geu Rae’s disheveled appearance as Sang Sik is rendered speechless.

“Misaeng” is just getting better and better! Rarely do I see a K-drama seriously address the neglect or outright hostility women can face in the office. I had worried that a show with only one female main character would treat Young Yi like a prize to be won by the male characters. Yet, this episode established a believable scenario for the relative absence of female employees. Plus, the reserved Young Yi has been given an active role. Despite being bullied by her male superiors, she quietly takes a stand, whether it be to tell the truth regarding Director Ma’s sexual harassment, or in support of the truth regarding someone outside of her team. With the introduction of manager, Ji Young, there is someone to serve as a mentor to Young Yi, and to highlight the experience of career women with children.

The male characters are growing on me, too. I am enjoying the pairing of Geu Rae and Sang Sik. Though his awkwardness initially irritated me, Geu Rae has become a hilarious straight man to the combative and insubordinate Sang Sik. Also, it was relief to see Baek Ki return to being conflicted about enjoying the status quo versus intervening on behalf of those less fortunate than him. Baek Ki seems destined for heartbreak as he repeatedly attempts to reach out to Young Yi, only to be rebuffed, because she is unaware of the ways he has tried to help her.

Finally, I love the sad little girl they chose to play So Mi. It’s a nice change not to have a precocious and chatty child, who would have upstaged the understated characters on the show. Here she is, giving her puppy dog eyes to Geu Rae, who could easily return the look.