Side dish: Make the bitter taste in your mouth concrete, but delicious with bitter melon. Check out Best Easy and Quick Bitter Melon Recipes. It’s an acquired taste that the office workers of this episode are sure to have plenty of experience with.

New contract worker, Jang Baek Ki (Kang Ha Neul) is chipper when he is the first to arrive at work, luxuriating in being alone. This quickly changes when his immediate supervisor arrives. As usual, ever since Baek Ki started his contract, he is ignored by his boss, and remains a frustrated, untapped resource. 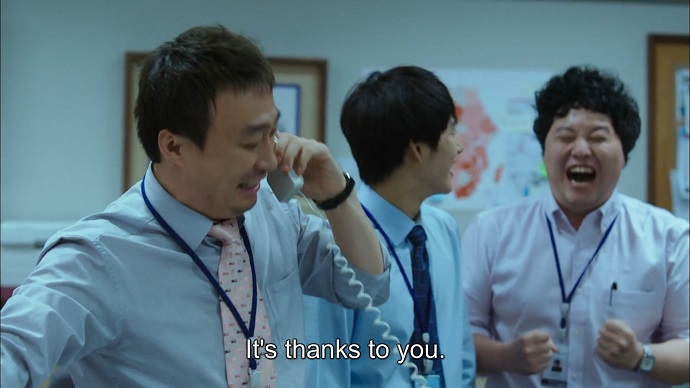 Baek Ki watches tightly as Sales Team 3 celebrates a successful project. Team manager, Oh Sang Sik (Lee Sung Min) decides to treat assistant manager, Kim Dong Sik (Kim Dae Myung) and contract worker, Jang Geu Rae (Im Si Wan) to a coffee. And by treat, he means make some instant coffee for them. The celebratory mood is broken by Manager Lee shouting at IT sales employee, Mr. Park for always being on the side of the client as opposed to his own company.

Meanwhile, lone female contract worker, An Young Yi (Kang So Ra) is suffering abuse at the hands of the Resources team. They correctly believe that she betrayed her team by revealing their mistake to Sales Team 3. Smooth talking Han Suk Yool (Byun Yo Han) witnesses Young Yi’s humiliation, and reports it to Geu Rae.

The pressure is on for Sales Team 3 to succeed in acquiring Wilmart as a client, because it will help the other sales teams. Sang Sik discovers that his former classmate, Byun Hyung Chul, aka Good-for-nothing Byun, is the head of Wilmart. Suddenly, Sales Team 3 are brimming with confidence.

Sang Sik and Geu Rae come across Young Yi unloading wooden board samples from the back of a car. To Geu Rae’s surprise, Sang Sik does not offer to help, his reason being that they should avoid being seen fraternizing with Young Yi by her superiors. However, the damage is already done, and her boss makes a nasty comparison of her betrayal to adultery. A flustered Young Yi injures herself, and limps to the medical office.

Young Yi runs into Baek Ki, who correctly surmises what happened. He grabs the boards that Young Yi is still carrying, angry that what he had warned her about has come to pass. Young Yi reluctantly asks Baek Ki to drop the boards off at her desk, before limping away.

At the Wilmart office, Byun arrives half an hour late to the meeting with Sang Sik, but the former classmates greet each other boisterously. Byun disappears again, and unbeknownst to Sang Sik, purposely keeps him and Geu Rae waiting for hours. When Byun finally does return, his words are laced with venom.

Back at the office, everyone, from the other sales teams to Sang Sik’s boss, are expecting a done deal. Sang Sik says nothing, seemingly in a state of shock. He broods until Byun calls, seeming conciliatory, asking to go out for drinks. Ever the professional, and eager to forgive an old friend, Sang Sik agrees.

Sang Sik and Geu Rae are ready to take Byun to a famous pig trotter restaurant. Byun rejects it in favour of an upscale establishment with private rooms. Sang Sik is forced to witness Byun making advances on the proprietress then laugh uproariously as Byun humiliates him. Geu Rae watches in discomfort.

The next morning, Byun tells a hungover Sang Sik that he had no intention of ever signing with his company. Resentful about having to suck up to Sang Sik as students, Byun only wanted to see Sang Sik grovel before him.

Meanwhile, IT sales team member, Mr. Park is an obvious pushover whose opinions are not respected at home nor at work. He gets the run around from one of their suppliers, then learns that his wife has incurred a new, ongoing expense without consulting him.

Mr. Park is tasked with training Geu Rae and Baek Ki by taking them along on a visit to a subcontractor. As usual, Mr. Park is contemplating resigning when Geu Rae gives him an ego boost by conveying some compliments from Sang Sik. In the car, Geu Rae listens to Mr. Park’s sales stories, which are pure fantasy, while Baek Ki looks exasperated.

It becomes apparent to Baek Ki that they are being neglected in favour of new clients. Mr. Park claims to have a good relationship with the subcontractor, but he’s proven wrong when they unintentionally overhear the subcontractor representative call him a pushover. Baek Ki decides that his training is over and returns to the office, while Geu Rae decides to stay behind, believing he still has something to learn.

Mr. Park contemplates resignation, as he accepts lip service from the subcontractor. Once again, Geu Rae’s sparkly reverential gaze revives Mr. Park. The salesman sprouts imaginary wings of confidence, and finds the fortitude to live up to his own tall tales. His demand to “do things by the book” alarms the subcontractors enough to get him an audience with the head of the company.

Sitting before the company president, Mr. Park loses the spark of audacity that got him there. He is cowed by the prospect of losing the subcontractor as the president berates his employees. Geu Rae decides to intervene by pretending to receive a call, then loudly announcing that the president will come and explain the situation in person. Tiny wings of confidence sprout hopefully from Mr. Park’s back. This was clearly a move the subcontractors did not see coming. 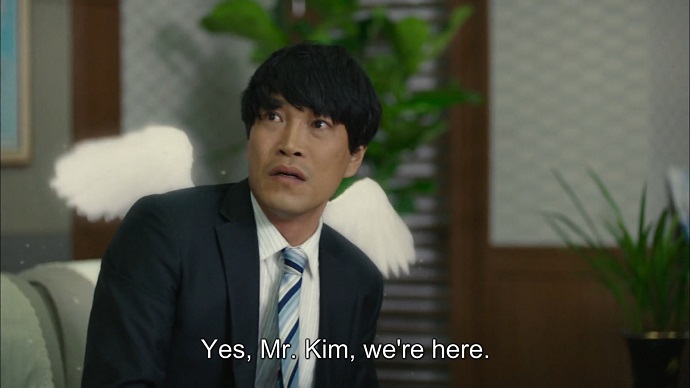 In anticipation of the subcontractor president’s arrival, the risk management and legal teams are in a flurry of activity. Suk Yool can’t help but tag along to watch, then excitedly report to Baek Ki and Young Yi that Geu Rae will be attending the big meeting. They are envious of the experience, and Baek Ki admits that he did not think he had anything to learn from Mr. Park.

Geu Rae sees that Mr. Park is clearly out of his depth at the meeting, and passes him a note. Again, Mr. Park is instantly revived and the wings of confidence burst out again. Geu Rae’s note tells him not to worry about the welfare of the subcontractor, but to save himself.

Mr. Park plainly states what the subcontractor did wrong, then claims responsibility for failing to do his job. As he continues to fall on his sword, Mr. Park has mentally replaced everyone in the meeting with his own face, and his clothes explode off of him as he lays himself bare.

Mr. Park begs them not to break the contract, and the suits laugh at his romantic notions. Of course, the contract will not be broken, and Mr. Park will not be held responsible; the subcontractors are too big, and Mr. Park is too small. Geu Rae is humbled to realize that he has no right to teach Mr. Park anything about strategy.

Baek Ki tries to play it cool, but Suk Yool sees through him, and provides him with an update on the results of the meeting. Baek Ki runs into a morose looking Geu Rae, who is upset that he was of no help. Baek Ki scoffs at Geu Rae for presuming he was capable of providing assistance. Mr. Park arrives at that point, and to Baek Ki’s surprise, thanks Geu Rae for encouraging him to rid himself of his doubt and concerns for the subcontractor. 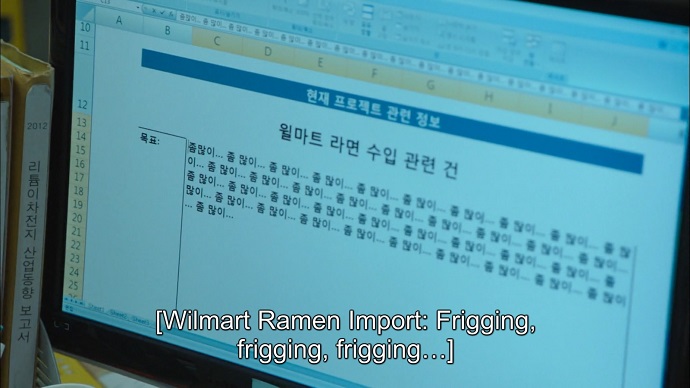 Dong Sik tells Geu Rae that not every move made by the employees is a decision of life or death. Mistakes are inevitable and the company must focus on problem solving instead of problem avoidance. Sang Sik walks by at this point and cynically states that reports must be written in order to avoid blame if a problem repeats itself. Sang Sik then begins writing a report about the Wilmart debacle. Dong Sik watches as Sang Sik repeatedly types, “Frigging” down the entire page.

Sang Sik’s wife sends a video in which his son’s class are all dressed up as superheroes, and his son is dressed up as a Trading Man, just like his father. Sang Sik watches proudly as his son spouts salesman propaganda then gets piled on by his jeering classmates. This family moment revives Sang Sik who happily gets back to work.

This episode could easily have been split into two separate episodes, because there was such a clear delineation between Sang Sik’s story line and Mr. Park’s. Yet, if I were to identify a common theme, two come readily to mind: sales equal humiliation, and never do business with so-called friends. Both Sang Sik and Mr. Park must swallow whatever their client or supplier feeds them, and they both overestimate the depth of the relationship with their business associates.

Both stories were painful to watch. In Sang Sik’s case, a likeable character is humiliated by a petty man with deep-seated issues. The way Byun drinks in Sang Sik’s shock and hurt with every nasty remark, and Sang Sik’s fight against his violent impulses, made for a horror show. Funnily enough, Sang Sik’s dead-eyed stare while waiting for Byun’s call along with his typing of a single phrases over and over are reminiscent of The Shining.

In contrast, I had about as much sympathy for the lumbering and incompetent Mr. Park as Baek Ki did. His defeatist attitude and flights of fancy involving Geu Rae were laughable, though I definitely could have done without seeing Mr. Park nude in a boardroom, or his entire story arc for that matter.

Finally, the brief scene in the elevator between Suk Yool and Geu Rae shows another amazing comedic duo that has not been featured lately. It appears that Suk Yool is the only one capable of making Geu Rae lose his temper, and that can only mean entertainment for the viewers. Here’s hoping that Suk Yool will be the featured player in the next episode. 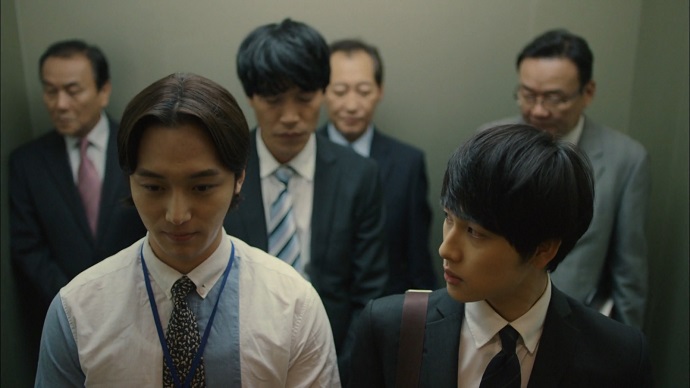