Side dish: Everyone looked hungry this episode, and I bet they wish they could eat some braised short ribs. In case you also feel the urge to eat braised short ribs, here are some tips from Fine Cooking on how to get the most from your meat.

Contract worker, An Young Yi (Kang So Ra) is being abused by her supervisor again. Despite having her report whipped in her face, Young Yi stands by her due diligence. Fellow contract worker, Jang Geu Rae (Im Si Wan) is about to intervene in the escalating situation when his boss, Oh Sang Sik (Lee Sung Min) steps in with a smile. Young Yi returns to her desk as Sang Sik and Geu Rae walk past, and Sang Sik must forcibly stop Geu Rae’s rubbernecking at Young Yi’s boss.

Sales Team 3 are trying to decide on a new business item. Assistant manager, Kim Dong Sik (Kim Dae Myung) explains to Geu Rae that Sang Sik chases after the riskier projects, because the easier ones can be done by anyone. Unfortunately, Sang Sik’s love of challenges has made him indifferent to his performance rating, and the result has been career stagnation.

Former star intern, Jang Baek Ki continues to find himself in a perplexing state of purgatory. His team is a flurry of activity that he is not allowed to participate in. When Baek Ki finally confronts his boss, he claims that Baek Ki has not been fully trained, but finally gives him the simplest of tasks.

Meanwhile, Young Yi is given the impossible task of getting a project that has been repeatedly rejected by Finance, approved. She seeks out Baek Ki for advice, and he advises her just to admit defeat. When it becomes clear that Young Yi will not back down, Baek Ki tells her to ask the Manager of Finance why the project was rejected. Young Yi is commenting on the weather when Baek Ki abruptly proposes going for drinks later. 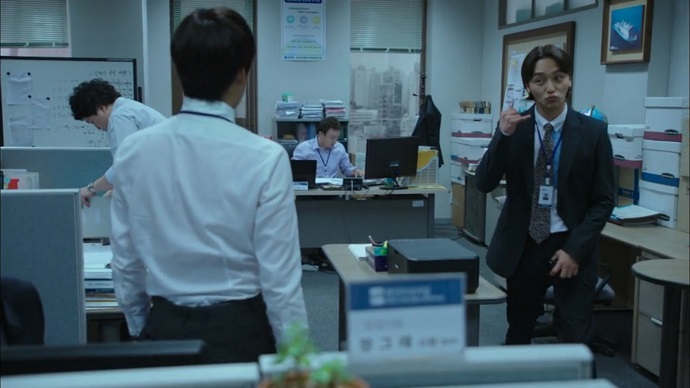 Geu Rae is swamped with the team project when Han Suk Yool (Byun Yo Han) stops by to suggest going for drinks after work. Geu Rae irritably says he is busy, and Suk Yool pleads his case to Sang Sik and Dong Sik. Sang Sik orders Geu Rae to finish up and go drink with Suk Yool.

Suk Yool invites Baek Ki to join them, but Baek Ki turns down the invite. So, it is more than a little awkward when Suk Yool and Geu Rae come face to face with Baek Ki and Young Yi entering a lounge geared towards couples.

Suk Yool is expertly mixing drinks for his three colleagues when Geu Rae suddenly advises Young Yi to see the Finance Manager. Baek Ki is hostile towards Geu Rae, nastily suggesting that he is ignorant of the required procedures. Yet, Baek Ki and Suk Yool both admit that the Finance Manager has a reputation of being open minded towards junior staff. Young Yi chugs her drink then decides to try Geu Rae’s suggestion. 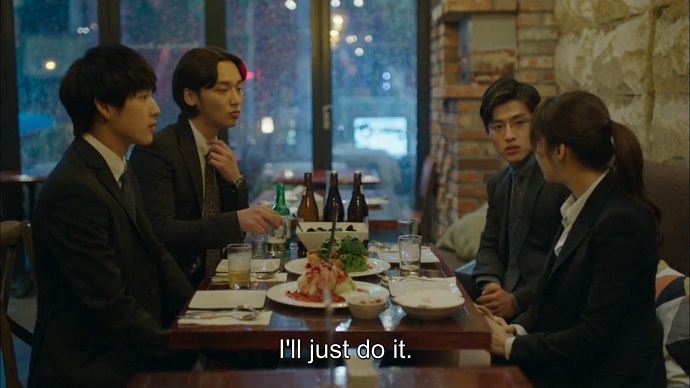 The Finance Manager wonders why Young Yi has been tasked with a project that has already been repeatedly rejected. When Young Yi fails to answer, the Finance Manager gives Young Yi her data and a deadline of tomorrow to report why Finance rejected their project. Young Yi jumps on the opportunity, while her team members are disheartened by it.

Before leaving work shamefully on time, Baek Ki gives Young Yi cream for the cut on her face. Young Yi and Geu Rae work all night, only taking a break to commiserate on their stalled projects. Young Yi is envious of how tightly knit Geu Rae’s team is. 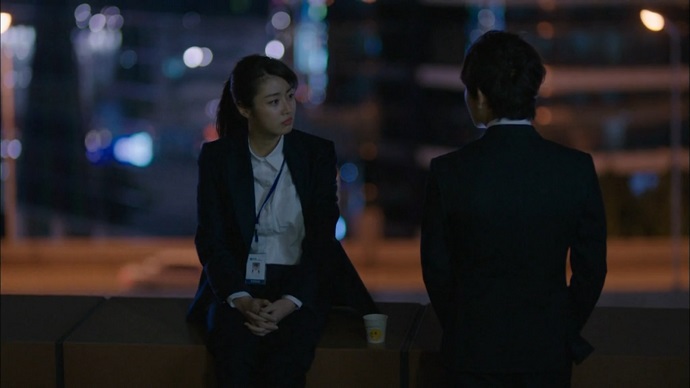 The next morning, Young Yi fails to provide a report to the Finance Manager, but Young Yi impresses her with understanding of the process and procedures that Finances follows. Meanwhile, Baek Ki has failed even in the simple task assigned to him by his supervisor.

The pressure is on for Sales Team 3 after breaking news of an embargo makes Sang Sik’s proposal even riskier than they predicted. Yet, in a meeting with his boss and the risk assessment team, Sang Sik is able to provide a solution that satisfies everybody.

Sales Team 3 makes an offering to whatever higher being will grant them success as they wait on the final decision of the Executive Director. Predictably, the Executive Director rejects their proposal and orders them to do the safer project. A resigned Sang Sik arrives home drunk, much to the disgust of his wife.

The next day, Sang Sik has conceded to the safer project that was preferred by his boss, and Sales Team 3 is working on it as directed. However, upon closer inspection, the safer choice is actually riskier than originally assessed, because conditions have changed so rapidly. As usual, Sang Sik is prepared to takes risks, even for a project that he does not believe in.

However, Sang Sik’s risk adverse boss is quick to distance himself from the project he originally endorsed. It is up to Sang Sik to claim responsibility for the project, however it might turn out. Dong Sik and Geu Rae also have no choice, but to work hard to save their boss.

Young Yi is being bullied by her supervisor again when Sang Sik deals with him the same way he deals with any subordinate who rubs him the wrong way: he trips him. Young Yi and Sang Sik share a coffee and their love of everything Russian, before each provide inspiration to the other. They both go scurrying to their desks to tackle their problematic projects. 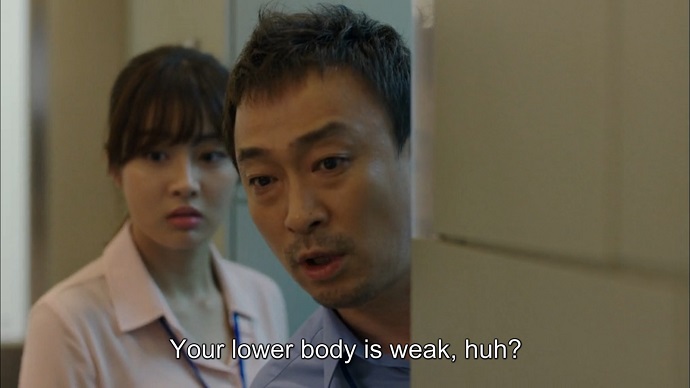 Young Yi’s successful proposal gains the grudging approval of her team, for the first time. Meanwhile, Sang Sik’s project obtains the full support of his boss. Yet, as Dong Sik had feared, Sang Sik’s failure to play the political game results in a competing sales team getting priority over his project. Then, in spite of Sales Team 3’s hard work, their project is taken out of their hands, and reassigned to anther department by the Executive Director. After witnessing Sang Sik’s cycle of frustration, Geu Rae finally understands his drive to drink to excess.

Sang Sik retches in his home washroom as his wife expresses frustration over his excessive drinking. The only way he can explain his drinking is that he likes the taste. After his wife storms out, Sang Sik looks directly at the audience and asks if we understand the taste of soul crushing frustration. 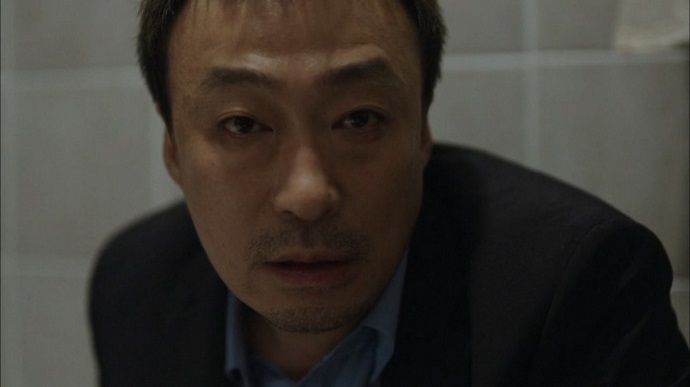 I am impressed that a K-drama has decided to make the frustration of the office worker fodder for entertainment, and to present it in such a detailed and realistic manner. Admittedly, I became a little lost in the trade jargon in the second half of this episode. However, I think the take home message is that Sang Sik is stuck in a situation he cannot work his way out of.

I am also impressed at how “Misaeng” has chosen to present its female characters. Given the hostile environment that she works in, Young Yi has been stalwart, and stands up for herself while maintaining respect for her seniors, no matter how unprofessional they may be. I am also glad to see the Manager of Finance, another competent and respected female character, ready to mentor Young Yi after putting her to the test.

Geu Rae has served as a bystander for the most part, though I am loving his understated reactions to Young Yi’s isolation, Baek Ki’s hostility, and the humiliation of Sang Sik. His interactions with Sang Sik and Suk Yool, both considerably more flamboyant and less principled than the poker faced Geu Rae, have been hilarious. For your viewing pleasure, here’s Geu Rae on the losing end of a tug of war with Sang Sik. 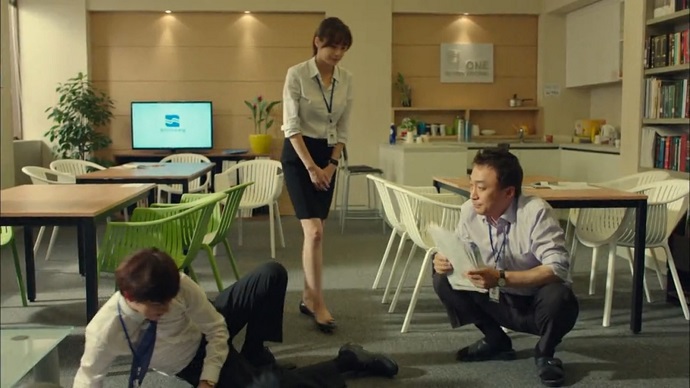