Side dish: It is safer to eat dry eel, because eel blood is apparently poisonous to humans. However, pre-grilled eel is probably a safe bet, too. Unagi Don is consistently delicious, and you can learn how to make it at Just One Cookbook.

It’s the weekend and we get to see what the International One employees do outside of the office. Jang Geu Rae (Im Si Wan) runs for his health in order to stay competitive. His boss, Oh Sang Sik (Lee Sung Min) tries unsuccessfully to nap on the couch. His children climb all over him while his wife shouts at him to play with the kids as she cleans the house.

After an unsuccessful blind date, Jang Baek Ki (Kang Ha Neul) goes to watch a movie and runs into a surprisingly sloppy looking An Young Yi (Kang So Ra). They watch a horror movie together, and Baek Ki is so nauseated that he turns down Young Yi’s suggestion of lunch. Young Yi reminds him that another horror show awaits them tomorrow, because they will be back at work.

After the Executive Director snatched Sang Sik’s project away from him, Department Director Kim gifts him with a big project worth millions. However, a Mr. Mun is associated with the phone project, and Sang Sik refuses to work with him. In an attempt to avoid Mr. Mun, he asks for more project funding, but Director Kim readily gives him his credit card. Then, Sang Sik, his Assistant Manager, Kim Dong Sik (Kim Dae Myung), and Geu Rae try unsuccessfully to make themselves sick by drinking expired milk. 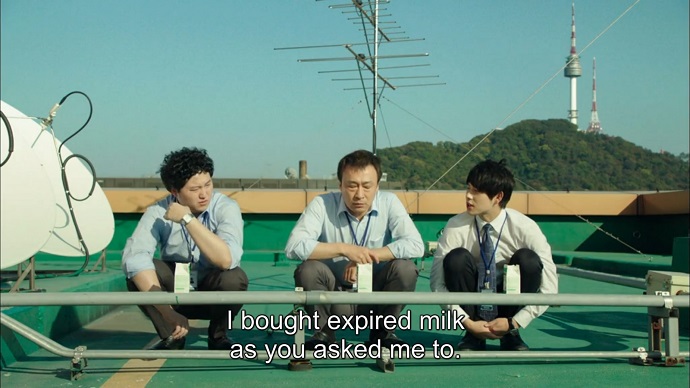 Mr. Mun’s appetite for booze and broads is so legendary that hostess bars are fighting for Sang Ski’s business. It is not the wining and dining that Sang Sik has a problem with. What goes against Sang Sik’s principles is Mr. Mun’s expectation that an escort be provided at the end of the night.

Thanks to Young Yi, the long rejected project of the Resource team has finally been approved. Young Yi’s boss assigns her to work on the project with her supervisor, Mr. Ha, but the man has no intention on working with Young Yi. Mr. Ha orders her to quit the project.

For the sake of his team, Sang Sik decides to accept the Mr. Mun contract. Following the suggestion of smooth talking Han Suk Yool (Byun Yo Han), Sang Sik plans to get the contract signed before Mr. Mun even leaves the hostess club. Suk Yool comes up with elaborate choreography to prevent Sang Sik and his team from getting drunk before Mr. Mun does, while Young Yi fills in the holes in Suk Yool’s plan.

Baek Ki’s frustration at being underused by his boss is at a breaking point when he is contacted by a headhunter. The prospect of an exit gives Baek Ki the courage to reject his supervisor’s assignments. Young Yi witnesses the blowup and follows Baek Ki, but he refuses her offer of support.

Young Yi is about to join Sang Sik’s team for dinner, when she and an unidentified man in a suit recognize each other. Young Yi makes a hasty exit, but is followed by Geu Rae. Deep in her thoughts about the mystery man, Young Yi fails to even notice when Geu Rae respectfully takes his leave.

Sang Sik and his team steel themselves using anti-hangover tonics before meeting Mr. Mun with their game faces on. However, Mr. Mun undermines their plans from the very beginning by choosing a different private room than the one booked, then demonstrates an alcohol tolerance that is out of their league. Sales Team 3 quickly lose track of their choreography, and the contract papers are trampled during the drunken carousing.

As Sang Sik and his team see Mr. Mun and one of the hostesses off, it would seem that Sang Sik’s principles have been sacrificed for the sake of business. Yet, the next morning, it turns out that Sang Sik had arranged for Mr. Mun to end up in bed with his wife for their anniversary. Sang Sik is pleased with himself, while Dong Sik is exasperated and Director Kim is furious.

Young Yi stubbornly refuses to quit the project that she and her supervisor have been assigned to work on. After watching Young Yi get screamed at by the supervisor, Suk Yool provides words of encouragement, telling her to stay stoic and proud. Young Yi decides instead to follow Baek Ki’s advice to humble herself before her supervisor in order to be able to work with him.

Baek Ki is typing up his resume when his supervisor finally explains why he has been excluding Baek Ki from team projects. What his team needs is a worker with a solid grasp of basic skills, and not someone like Baek Ki who specializes in presentations and quick results. In fact, Baek Ki’s need for professional acknowledgement makes him impatient, and ill suited to the long term view of the team. Baek Ki storms back to his desk to fire off his resume to the headhunter.

Baek Ki runs into Young Yi, and she informs him that she followed his advice to stop fighting her supervisor and escalating the conflict. Baek Ki seems perturbed since he has hardly been one to practice what he preached. For Baek Ki, his solution is to resign. Later, Baek Ki’s meeting with the headhunter is spotted by not only Geu Rae and his team, but also Baek Ki’s supervisor who looks disappointed.

In the aftermath of another professional failure, Sang Sik’s health appears to be in steep decline when he blacks out and has a nose bleed. No one is able to reach Sang Sik after he decides to go for a walk. Dong Sik, Geu Rae and even the competing sales team go running frantically on the streets looking for Sang Sik. The prospect of losing Sang Sik causes Geu Rae to remember his father’s funeral.

It turns out that Sang Sik is sleeping in a hospital bed. When he wakes up, he finds multiple messages and missed calls. Director Kim frets over his health then gives him some dried eel for increased energy and stamina. Sang Sik is guarding the prized gift when Director Kim roars his name and marches over. Sang Sik pushes the gift bag into hiding lest his boss reclaim it. However, his fear is unwarranted: Director Kim is ecstatic over a double contract from Mr. Mun.

Sang Sik’s usual methodical research revealed that the true decision maker was not Mr. Mun, but Mrs. Mun. And, Mrs. Mun was pleased with Sang Sik’s arrangement to have her spend the night with her husband on their anniversary. When Geu Rae discovers that Sang Sik managed to keep his principles and get the contract, he can’t stop giggling to himself.

Director Kim had promised Sang Sik a new member for his team who would be a Middle East specialist. As always, Sang Sik is hoping for Young Yi, but who he gets is a middle aged man who causes Sang Sik’s jaw to stiffen on sight. And, we are left to speculate on the man’s identity as the episode ends.

It was a relief to see the characters of “Misaeng” outside of the florescent lights of the office; probably almost as much of a relief as the workers felt. Who would have thought that tiny, pasty Geu Rae is a runner, capable of sprinting up and down hills? Or, that Young Yi wears her hair down and a baggy t-shirt to watch a movie? It was not surprising to see Sang Sik being overrun by his children and wife.

Sadly, the only one who seems to carry his work personae over into his personal life is the guarded and always proper Baek Ki. After spending so much effort trying to befriend Young Yi, and finally succeeding in getting her to accept his help, it was sad to watch him distance himself from her. She tries to return the favour of helping him through his difficulties at work, but he repeatedly rejects it.

One can only imagine how slimy Suk Yool spent his weekend, and yet, he was surprisingly sweet towards Young Yi, after repeatedly witnessing her conflict with her supervisor. His straight talking support of Young Yi is such a contrast from Geu Rae’s quiet, unobtrusive empathy, and Baek Ki’s cautious advice to stick with the status quo. I was confused by Young Yi’s decision to follow Baek Ki’s advice after receiving Suk Yool’s, and can only speculate that she realized that to succeed, she would need to follow the rules like Baek Ki rather than do things her way like Suk Yool.

After a few episodes of watching Sang Sik get ground down, it was good to see him winning for a change. Finally, his hard work has paid off by allowing him to succeed while keeping his principles intact. Unfortunately, it appears that Sang Sik is already facing another challenge with the arrival of his new team member, who he appears to have a bad history with.

Geu Rae has mostly served as an observer in this episode, though it is notable that he seems to consider Sang Sik a father figure, in the absence of a real father and his Go instructors. It will be interesting to watch Geu Rae mature from someone who still needs a father figure into the daring and confident man we had a glimpse of at the beginning of the series.