Side dish: Unlike Mr. Park, okra doesn’t have to be slimy. How to Cook Okra That’s Not Slimy.

Sales Team 3 meet their newest member, the slimy Mr. Park who gets down to the task of offending everyone. Mr. Park openly calls contract worker, Jang Geu Rae (Im Si Wan) “GED” in reference to his low level of education. He then commandeers the desk of Assistant Manager, Kim Dong Sik (Kim Dae Myung). Team leader, Oh Sang Sik (Lee Sung Min) goes immediately to Department Director Kim to get rid of Mr. Park. However, Mr. Park has gotten results where it counts, and Sang Sik is told to suck it up for the sake of profit.

When Sang Sik returns, Mr. Park is busy bullying Geu Rae as Dong Sik and members of the competing sales team watch in horror. Sang Sik brusquely refuses to play Mr. Park’s games. Mr. Park is given work, but whines about it then skips out without explanation.

Underused and unhappy contract worker, Jang Baek Ki (Kang Ha Neul) and his supervisor, Mr. Kang both know that Baek Ki has been meeting with a head hunter. Fortunately, Mr. Kang will be working out of the office, thus avoiding forced, awkward interaction.

Lone female contract worker, An Young Yi (Kang So Ra) agreed to serve as support to her misogynous supervisor. To test the limits of her obedience, he orders her to empty and wash the trashcans. Young Yi hesitates then complies. Baek Ki snatches the trashcans from Young Yi and angrily does the job for her in the men’s washroom. Hilariously, Young Yi attempts to retrieve the trashcans, and startles Dong Sik at the urinals. 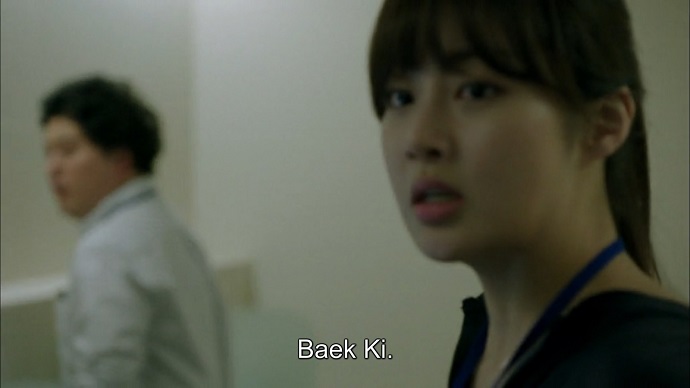 Instead of being grateful, Young Yi is furious at Baek Ki’s interference. Baek Ki attempts to justify it by insisting that neither of them deserve the mistreatment, and they should both quit. He had advised Young Yi to cooperate with her supervisor, but not to this extent. Young Yi cannot see any other way since her education did not prepare her for being ostracized, and no amount of hard work can alleviate it. Young Yi decides to stick to her strategy, and Baek Ki reveals that his solution is to quit the company.

Smooth talker, Han Suk Yool (Byun Yo Han) had boasted to the other contract workers about how great he gets along with his boss. Unfortunately, Suk Yool’s lazy Assistant Manager stiffs him on coffee and unloads his responsibilities onto him. Suk Yool ends up working at midnight to receive a business call from Canada, then preparing for a breakfast meeting at 5:30. He attempts to commiserate with Geu Rae who has no sympathy for his former presentation partner. 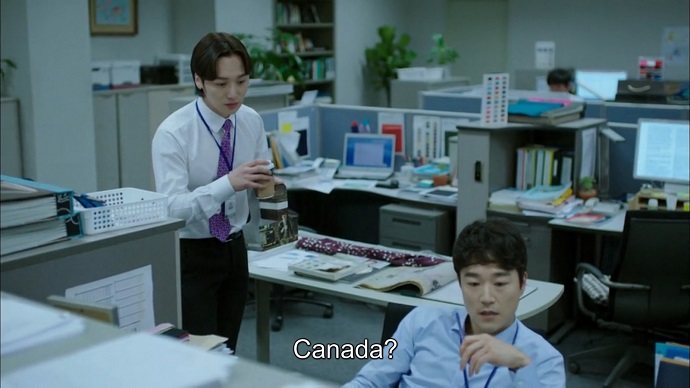 Mr. Park is playing hooky from work, and has Geu Rae bring him his shoes so that he may have the correct foot wear for the fancy hotel sauna. Geu Rae is left to carry Mr. Park’s slippers back to the office, and tries not to tattle on him when Dong Sik asks where Mr. Park is.

Sang Sik stops by Baek Ki’s office, looking for Mr Kang, who remains out of the office. With a job interview scheduled, Baek Ki appears to already have given up on work. Sang Sik answers Mr. Kang’s ringing phone when it becomes apparent that Baek Ki won’t do it. Aware of Baek Ki’s meeting with a head hunter, Sang Sik advises him to keep his mind on work.

At the sauna, Mr. Park is steaming in the baths, but also stewing with resentment at Sang Sik’s treatment of him. Mr. Park returns to the office where he and Dong Sik almost come to blows just as Director Kim walks by. Suddenly, Mr. Park is on his best behaviour, though he mutters about being screwed over under his breath. 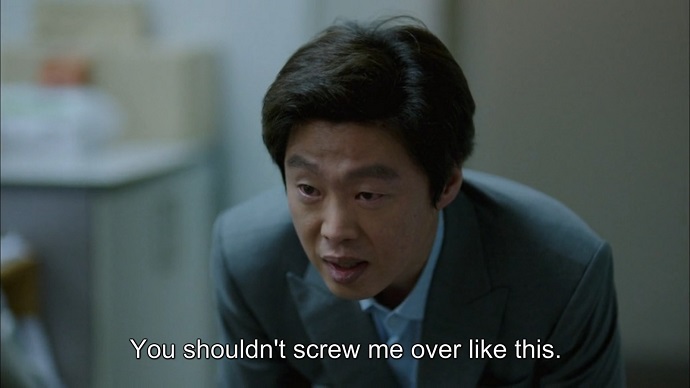 It turns out that Mr. Park used to be a good worker, and a star on the Steel team. Sang Sik decides to give him a chance, and will grant Mr. Park’s request to have Geu Rae assist him. Sang Sik tells Geu Rae to do what he is good at: being patient. Dong Sik reprimands Geu Rae for taking Mr. Park’s abuse, and accuses him of having no pride. Sang Sik and Dong Sik’s words ring in Geu Rae’s ears, and when he returns home, he reviews his Go game strategy notes. He reaffirms his strategy to remain cool and collected.

Geu Rae works hard to prove his competence to Mr. Park. When Mr. Park attempts to school him on basic trade terminology, Geu Rae demonstrates that he knows them all by heart. Mr. Park deals a low blow by speaking English to the uncomprehending Geu Rae. Geu Rae stays calm, and Mr. Park walks off, seemingly pleased with himself. However, from around the corner, his expression changes and he calls Geu Rae an arrogant jerk.

Baek Ki continues to shirk work until he is asked by Mr. Kang to do a project on his behalf since he is out of the office. Mr. Kang bluntly states that he hopes Baek Ki will do a good job in spite of his imminent departure. Baek Ki reluctantly agrees to do the job, but quickly becomes engrossed in the work.

Mr. Park continues pushing Geu Rae’s buttons by asking him to massage his shoulders. Geu Rae agrees, and everyone stares while Mr. Park makes obscene noises. Mr. Park then asks Geu Rae to massage his feet. Geu Rae is about to comply when he is saved by a phone call from Director Kim.

Dong Sik takes this opportunity to ask Geu Rae why he always obeys without complaint, and compares him to a long time inmate who has been released back into a society. Dong Sik wants to get to know Geu Rae better in order to understand him. 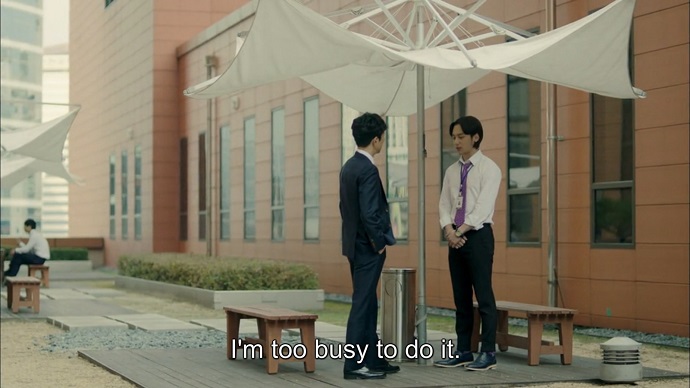 Baek Ki finds out that Finance has rejected his proposal, because the basics are missing. Baek Ki reacts in frustration as Mr. Kang’s criticism about his lack of knowledge about the basics comes back to haunt him.

Young Yi is now treated like the cleaning lady by her team, and not even invited to join in on meetings. After one of her team members breaks a cup, the mess is left to her. Geu Rae and Suk Yool help her clean up as Baek Ki looks on. Suk Yool calls them for what they are: Geu Rae is a pushover, Young Yi is a maid, and Baek Ki is a ball of stress. Suk Yool then reiterates his advice to her to be on the offensive, but Geu Rae offers us his strategy of remaining patient and cool.

Baek Ki has just confirmed his job interview tomorrow, when Sang Sik stops by his desk. Having just come from Finance, Sang Sik outlines what Baek Ki did wrong in his proposal, but calls his format “refreshing”, which seems a more positive assessment than Mr. Kang’s, but is probably not a compliment.

Geu Rae is leaving work when it occurs to him to invite Dong Sik to get to know him. He has Dong Sik come home with him to meet his mother, who enjoys making Dong Sik feel guilty. Geu Rae reassures Dong Sik that his mother is just joking, but denies that it is funny. Geu Rae reveals his past as a failed professional Go player, and uses his game notes to explain his approach to his current job.

Geu Rae also discloses that he was sponsored into the company by the president of a small firm who is acquainted with the Executive Director. He was employed by the small firm after quitting Go, but his reputation as a former Go player worked against him. Hence the reason why he decided to hide his Go playing past. Dong Sik waxes poetic about the definition of success, then invites Geu Rae to follow him on Twitter.

Baek Ki goes to the building roof top to contemplate his past interactions with Mr. Kang. He is startled by Suk Yool who appears to be directing himself to “attack regardless of hierachy”. Back at his desk, Baek Ki reluctantly calls Mr. Kang to admit that his proposal was rejected, because he lacked the basics. He asks Mr. Kang for help, Mr. Kang instructs him, and they appear to have come to an understanding.

Despite claiming that workers should not socialize with the boss on social media, Geu Rae ends up following Dong Sik on Twitter, and Dong Sik follows back. Meanwhile, Baek Ki is hard at work on the proposal, and Young Yi is busy distributing coffee to the members of her team. Only Suk Yool is not working, choosing instead to give his Assistant Manager the stare down while he tightens his fist. 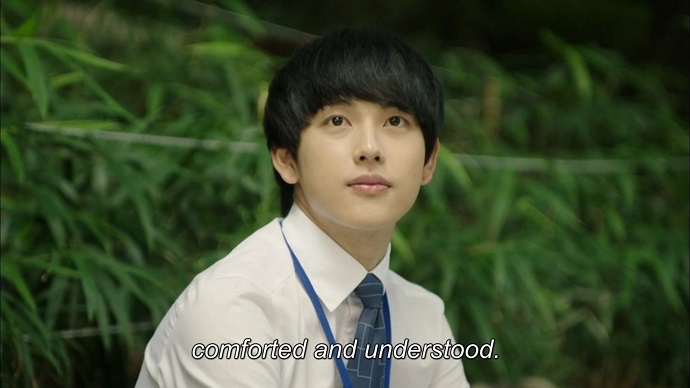 Geu Rae is in a great mood, optimistic about the endless possibilities in life. He returns to the office, and finds Sang Sik face to face with Mr. Park. Sang Sik throws down the gauntlet, stating that he can’t work with Mr. Park like this any more. The two men stare at each other, and the episode ends.

Baek Ki spent the previous episode rebuffing Young Yi’s attempt to reach out to him. In this episode, when he sees Young Yi being mistreated by her team, Baek Ki cannot help but interfere. Initially, it would seem that Baek Ki is just looking out for her, the way he always has. However, Baek Ki’s mind is clearly on his own situation, because he is quick to suggest that Young Yi quit, too. Perhaps, in convincing her that it is right thing to do, he is hoping to gain support for his decision.

Unfortunately, Baek Ki finds universal disapproval of his decision to quit. He comes to realize that his supervisor was right about his need to learn the basics, and thankfully, Mr. Kang softens his approach towards Baek Ki. Their unvoiced truce was quite sweet.

It is great to see Geu Rae coming out of his shell, and showing more than one blank expression on his face. He seems most at ease, even cheeky, around his mother. However, he is smiling openly at Young Yi, which is perhaps a reflection of how comfortable he has become around her. Best of all are Geu Rae’s interactions with Suk Yool, who he appears to have the least amount of respect for. The look of disdain on his face is priceless. When will they dedicate an episode to those two?!