Side Dish: Lee Kyoung Young, the actor who plays the Executive Director, has been in – count ’em – 11 movies in 2014, in addition to appearing in “Misaeng”. With that much work, he probably eats a lot to keep up his stamina. I don’t know if this recipe for Georgian cheese bread will help, but anyway, it looks tasty.

Not satisfied with just harassing newbie contractor Jang Geu Rae (Im Si Wan), resident office asshole, Mr. Park (Kim Hee Won) takes it upon himself to harass a lower-ranking female employee in the lounge. He insists she get him coffee and then comments on her shape.

When the story reaches team leader, Oh Sang Sik (Lee Sung Min), he confronts Mr. Park, pointing out that he won’t let such things slide. Sang Sik tells Mr. Park that he’ll let him work independently in their team, but in return Mr. Park has to expand his used car item in Jordan into heavy machinery. 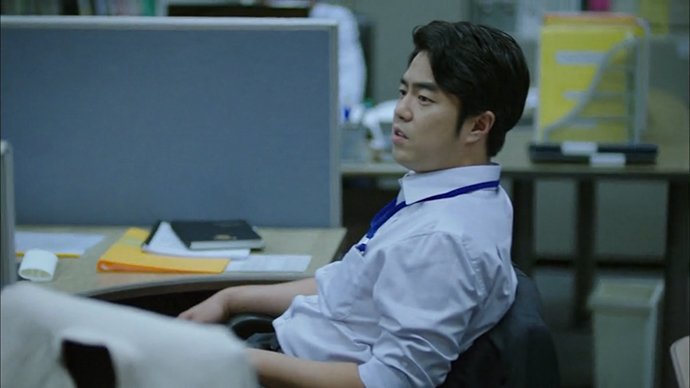 Back with the Resources team, former superstar intern An Young Yi (Kang So Ra) is reduced to doing menial tasks for her team. Assistant Manager Ha (Jun Suk Ho) looks bemused, as the team leader sends her for coffee.

Going over the documentation for Mr. Park’s deals, both Sang Sik and Geu Rae notice that something is off. When Sang Sik goes up onto the roof to think about it, he runs into Young Yi, who also noticed the same thing. Sang Sik mentions the man she ran away from in the company lobby a few episodes ago, and makes an oblique comment about the source of her talents.

At the steel team, resentful contractor Jang Baek Ki (Kang Ha Neul) is counting pipes when his supervisor, Assistant Manager Kang (Oh Min Seok) tells him off for the disorganized state of the samples. Baek Ki promptly volunteers to fix it, as Young Yi walks in. She asks whether he’s switched to her method of getting by, i.e. to act as a servant, and Baek Ki flashes back to telling the headhunter that he didn’t intend to leave his company. Rather than respond, Baek Ki invites Young Yi out to dinner.

Fast-talking contractor Han Suk Yool (Byun Yo Han) is chewed out by his boss for being in a bad mood. Unable to take it anymore, Suk Yool takes a half-day off.

At the resources team, Assistant Manager Ha finally snaps as Young Yi is given another menial errand to run. He chases after Young Yi and sends her to the warehouse at Pyeongtaek to move cargo to the port, even though they still have five days till the deadline. 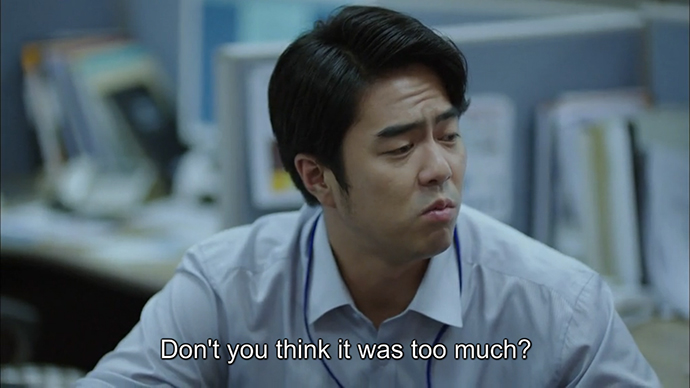 Mr. Park protests the lack of movement on his proposal for the Jordan used car deal. Sang Sik is unmoved, so Mr. Park leaves in a huff, and texts Geu Rae to follow him. They meet in a stairwell, where Mr. Park uses a combination of bullying and advice to try to get Geu Rae on side. Baek Ki walks in to the same stairwell, but leaves without announcing his presence. As he leaves, Young Yi texts that she can’t make dinner.

It turns out that Young Yi is in the car with Suk Yool who tagged along to see the site. At the warehouse, she discovers there’s a freight workers’ strike, so the cargo can’t be moved. She’s told to come back to the office, but instead, she borrows the company’s small truck, and ends up driving it to and from the port herself (with a terrified Suk Yool as passenger) to move the cargo.

Back at the office, Sang Sik asks for an explanation from Mr. Park as to why the subcontractor is making so much money on the deal. Mr. Park goes on the offensive, yelling at Sang Sik in front of the whole office, and then makes his exit. Sang Sik decides to send Dong Sik and Geu Rae to the subcontractor to get a statement for an internal audit. On the way there, Geu Rae panics at the possible outcomes, but Dong Sik calmly explains they’re just going to check whether the correct procedure was followed.

Dong Sik and Geu Rae arrive at the office of the subcontractor, to find Mr. Park already there. Mr. Park tries to browbeat Dong Sik into leaving, but he refuses.

At the office, Sang Sik realizes he might have made a mistake and tries to call Dong Sik back, but is stopped by the department head, who tells him to follow procedures. They go to meet with the executive director, who looks as worried as the department head.

At the subcontractor’s office, when Dong Sik gets the go-ahead, Mr. Park physically drags Dong Sik away, to browbeat him some more. Geu Rae stays in the office, as the nervous subcontractor representative makes frantic calls and faxes.

Sang Sik arrives with the audit team, as Geu Rae comes to the realization that if Mr. Park isn’t guilty, it’s their team who will go down. The issue seems to be settled with a fax from the company in Jordan until Mr. Park and the subcontractor representative make a blunder responding to a question from Geu Rae. The auditors decide to call the company in Jordan to investigate. As it becomes clear that something isn’t kosher, Mr. Park starts babbling in a panic.

Geu Rae figures out that the whole operation is a family affair, with Mr. Park’s cousin being the owner of the company in Jordan, and his uncle the owner of the subcontractor. Mr. Park is subsequently led away by the audit team, while Sang Sik explains how Mr. Park’s dissatisfaction with his job led to his current state of corruption. However, they still don’t know how it’s going to turn out, since things work differently within the company. 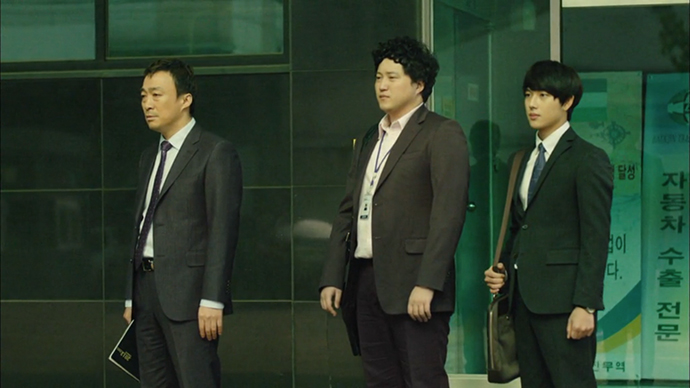 Late at night, in the office, Assistant Manager Ha calls Young Yi to find out why she never returned. She’s still driving the truck back and forth, exhausted but, Assistant Manager Ha just blows up at her rather than acknowledge her efforts. He tells her to drive the truck to the company, then sends her home, but not before discovering Suk Yool hiding in the passenger seat. 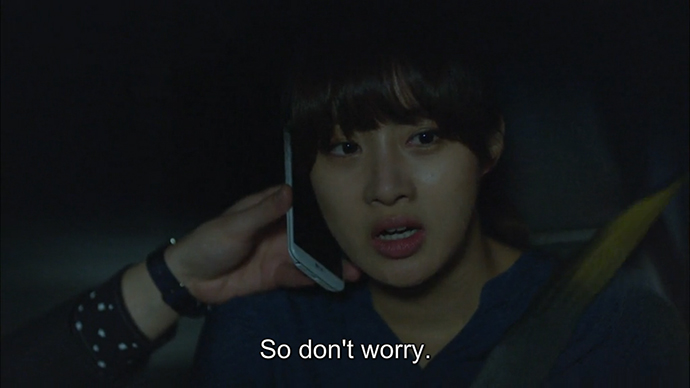 The next day, Dong Sik explains to Geu Rae that the department head and Sang Sik may be on the hook for Mr. Park’s actions, depending on how far the investigations go. At the end of the day, Geu Rae goes home, contemplating how the world of work is like a game of Go, but now it’s his game to play.

So, we’ve finally come around to Jordan, where the show started. I’m pretty curious to see how Mr. Park’s double dealing ends up with Geu Rae’s frantic chase through the streets of Amman. Since “Misaeng” keeps delivering great episodes along the way, I’m equally happy to wait.

The look on Young Yi’s face as Assistant Manager Ha chewed her out was heart-breaking. It’s no surprise that her frustration with the dismissive attitude of her superiors led her to take on the herculean task of moving the cargo herself, though even I had to question her method of going about it. At least, Assistant Manager Ha put a stop to the team using her as a personal maid and actually gave her something to do, so here’s hoping that progress carries over to the next episodes.

Compared to Young Yi, everyone else’s situation seems substantially better. Baek Ki’s acceptance of Assistant Manager Kang’s help seems to have done a lot for him, and Suk Yool, as bad as he has it, at least has responsibilities that go beyond cleaning up after his teammates. Though, speaking of Suk Yool, watching him cling to the frame of the truck while Young Yi drove at the glacial pace of 40 km/h (about 25 mph) on the highway was priceless. I’m sure there will be some repercussions for him being in the truck later on, but it was worth it for my amusement.

As for Geu Rae, it’s kind of nice for him to score a win over the awful Mr. Park, and be able to show off his deductive skills while he’s at it. Unfortunately, call it my K-drama intuition (or the previews at the end), but I have the feeling we haven’t seen the last of this story.

If this was a humdrum catalogue of the daily defeats suffered from being a little fish at a big company, we’d all have stopped watching a long time ago. But, “Misaeng” does a great job of balancing those dark, but banal moments with humour. Since a lot of that is courtesy of Suk Yool, here’s some Suk Yool to make your day. 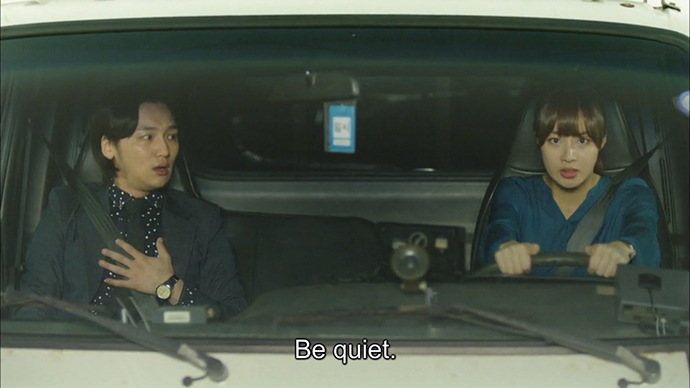 And this fantastic expression, inspired by Suk Yool: 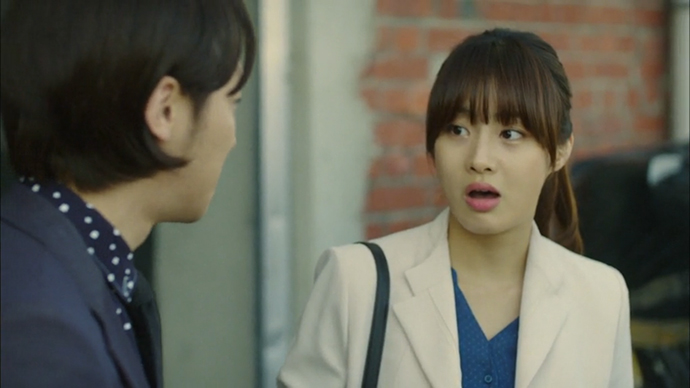