We count down the days to Christmas by unveiling 24 magical Kdrama moments. Next up, “Rooftop Prince”.

Having arrived from the Joseon era via an unexplained time warp, Prince Yi Gak (Park Yoo Chun) is a fish out of water in modern-day Seoul. Accompanied by his royal retainers, Yong Sul (Jung Suk Won), Chi San (Choi Woo Shik) and Man Bo (Lee Min Ho), Yi Gak winds up in the rooftop apartment of Park Ha (Han Ji Min), with nothing to wear, but colourful track suits.

After rummaging clothes for them in neighbourhood recycling bins, Park Ha sends them into a building, instructing them to find the washroom and change there, conveniently forgetting that they can’t read Hangul, and have no idea what a modern washroom looks like.

Unsurprisingly, the Joseon boys enter the first closed room they see, which turns out to be the elevator. When the door closes, they quickly get down to the business of changing their clothes. But, it’s not long before the door opens again, on a women’s dance class.

Terrified, the half-dressed men start screaming and throwing their clothes on, but don’t manage to get dressed before the door opens yet again, on a group of schoolgirls, who throw popcorn at them, call them perverts, and happily snap pictures on their cellphones.

The last time the door opens, it’s on an irritated Park Ha, who gives them nothing, but a cold stare. Though, I can’t see how she kept a straight face at the sight of Yi Gak in acid-washed jeans and Uggs. 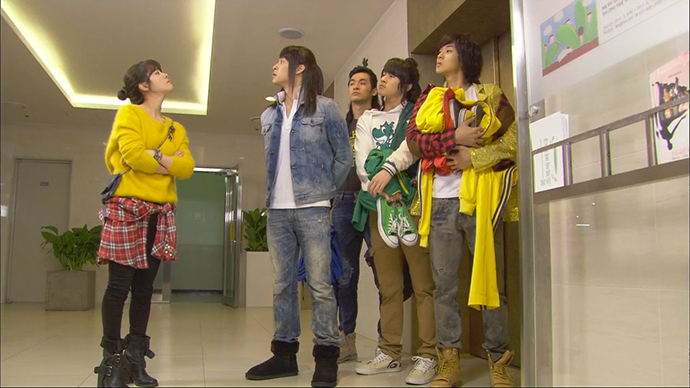 “Rooftop Prince” frequently felt like several shows in one, with the time travel, a Joseon-era murder mystery, a chaebol family drama, and a fish-out-of-water comedy. From my pick above, I think you can tell which I enjoyed the most.