A mystery man lands on his behind right in front of insurance salesman, Dae Young, writer, Soo Ji, and old lady, Jeom Yi. Dae Young assumes that the stranger set fire to their mailbox, and gives chase. Jeom Yi intervenes as Dae Young is manhandling the suspected arsonist to reveal that the mystery man is the tenant of an illegal dwelling on the rooftop.

They confront their landlady, Mi Ran about the illegal tenant. Though she initially denies any knowledge, Mi Ran withers in the face of Soo Ji’s anger at being labelled a thief in order to hide the illegal dwelling. Mi Ran scurries away to research possible penalties for illegal extensions, and Dae Young later follows to sell her insurance.

At the government office, Soo Ji literally runs into her crush, Sang Woo. She is beaming over the collision when co-worker, In Na reveals that Sang Woo appears to meet someone regularly after work, and texts enthusiastically. The women learn that Sang Woo no longer rushes back to Seoul on the weekends, because he has found reasons to stay.

Soo Ji intercepts Dae Young as he returns home to wail about Sang Woo having a girlfriend. Dae Young denies this, since Sang Woo spends so much of his time hanging out and texting him. Soo Ji is ready to throttle Dae Young for dating Sang Woo, when he assures her that he plans to fix her up with Sang Woo this weekend.

The bickering neighbours are interrupted by Jeom Yi carrying a butane gas stove. She invites them to join her on the roof for a dinner of stuffed chicken ginseng soup. Jeom Yi drags the mystery tenant out of his shed, and introduces him as Lee Joo Seung. She knows that he is studying for the civil servant examinations, and she dotes on him like a son, but she is as shocked as her neighbours to learn that the boyish and sulky Joo Seung is 30 years old.

When Jeom Yi doles out the chicken, she gives Soo Ji the neck, which is full of bones. Regardless, Soo Ji gets her hands on meatier parts, and everyone eats orgasmically. The chicken works its magic on the nervous and antisocial Joo Seung, who eventually breaks out into a smile. When the chicken has been consumed, Soo Ji and Dae Young argue over the leftover ginseng’s nutritional value.

Mi Ran is on the hunt for the source of the underage cigarette and alcohol sales. She confronts the beauty blogger working in the nearby convenience store who denies having sold anything prohibited to Mi Ran’s son. A frustrated Mi Ran takes issue with how revealing the young woman’s clothing is, and the beauty blogger lashes out at her.

Meanwhile, Dae Young and Soo Ji are in the park, plotting how to have her “coincidentally” run into Sang Woo. Soo Ji suggests meeting in Jo Chun Byun, where everyone is flocking to see the cherry blossoms. Dae Young arranges an outing with Sang Woo to go biking in the area.

The only hitch in the plan is that Soo Ji does not know how to ride a bike. Dae Young goes to retrieve an abandoned bicycle from the roof of their apartment. He walks in on Jeom Yi applying heat bandages to Joo Seung’s back injury, the result from his fall. After Dae Young leaves, Jeom Yi berates Joo Seung for failing to get some exercise and socialize with Dae Young and Soo Ji.

Soo Ji struggles to ride a bike while Barassi 2.0, renamed Happy by Soo Ji, watches on. Dae Young decides to use a sausage as incentive on Soo Ji just as he uses treats to train Happy. Soo Ji falls over multiple times as Dae Young gives vague advice while fiddling on his phone.

Soo Ji finally masters riding a bicycle, but a passing motorcyclist causes her to fall into Dae Young’s arms. The moment is ripe with romantic potential, when Dae Young breaks the spell by shoving Soo Ji away, claiming that he was worried about her damaging the car they fell against. Dae Young continues grinding down on any sentimental feeling by trying to sell Soo Ji insurance, then forcing her to give him and Happy a ride on the back of the bike.

After Dae Young helps a hapless Sang Woo hang his laundry, while advising him to use the local dry cleaner as a personal closet, he proposes that they eat crab kimchi soup before biking. At the restaurant, Dae Young gives an informative lecture about this regional dish made from raw crab. Sang Woo is eager to eat after an amusingly awkward moment in which he betrays how wealthy his family is.

When Soo Ji pops up outside the restaurant, she is salivating over the soup rather than Sang Woo, but she quickly refocuses on the prize (marriage). Her frantic greeting as the men are paying the bill triggers Sang Woo’s flight response, and a return to his officious alter ego. Undeterred, Dae Young invites Soo Ji to join them for biking, to Sang Woo’s chagrin.

Jeom Yi is making the climb up to the roof with a tray of homemade food, when she is overtaken by a delivery man. Joo Seung can freely order food now that he no longer needs to stay hidden. When Jeom Yi tries to convince him to eat her food instead, Joo Seung angrily tells her off then disappears into his shed. He returns shamefaced after Jeom Yi explains that she simply felt sorry for him.

While Soo Ji goes rent a bike, Sang Woo wonders aloud whether her appearance was really serendipity. The convenience store beauty blogger suddenly shows up. She assumes that Sang Woo and Dae Young are a couple, then rides away on the back of a boyfriend’s bike.

Dae Young’s plan to pull ahead during the ride so that Soo Ji can bike alone with Sang Woo fails spectacularly when Sang Woo decides to race him. Soo Ji is left behind to struggle and curse under the cherry blossoms. 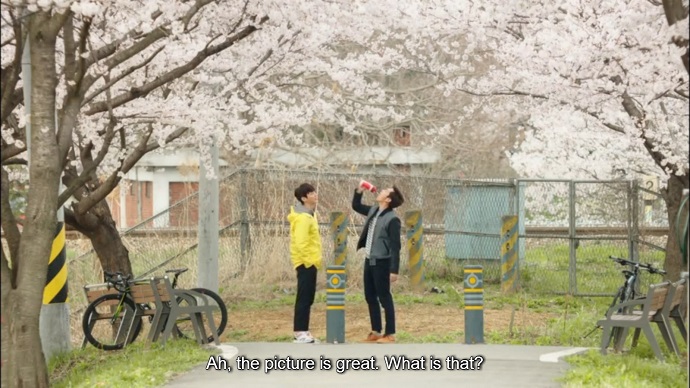 Meanwhile, Dae Young’s colleague, Taek Soo is being verbally and physically assaulted by a client trying to claim her husband’s insurance money. After being forcibly separated from the irate woman, a sad Taek Soo calls his daughter, but she is indifferent towards him, and quickly hangs up. He then resorts to bothering Dae Young, as usual. 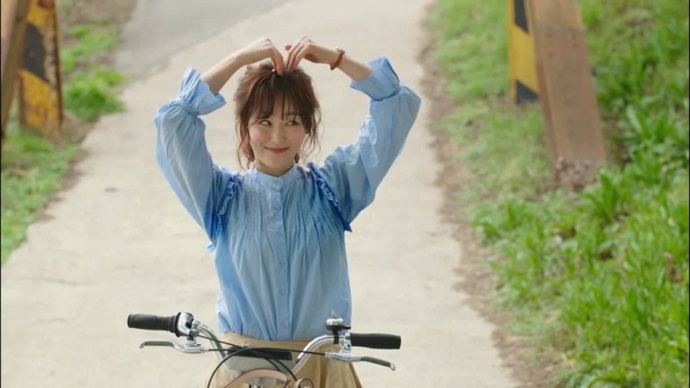 Soo Ji runs into the fresh faced convenience store fashion blogger, and realizes how terrible she appeared in front of Sang Woo. However, to Dae Young’s surprise, Sang Woo admits that he finds Soo Ji more fun than he originally thought.

Taek Soo comes looking for Dae Young, and finds Soo Ji outside their apartment building also anxiously awaiting his return. They snipe at each other until Dae Young arrives then they play tug of war with his arms in a bid for his time and attention. Jeom Yi shows up to insist that Dae Young spend time with Joo Seung. Unbeknownst to the boisterous group, Joo Seung stares down intently from the roof.

There were a lot of cute moments in this episode, and it was topped off by a bike ride under the cherry blossoms.

I enjoy how comfortable and playful the relationship between Sang Woo and Dae Young is. It is too bad that Soo Ji does not see the more casual side of Sang Woo.

Jeom Yi and Joo Seung also have an interesting dynamic; the prickly Jeom Yi dotes on Joo Seung, and he reluctantly accepts her mothering. It was especially endearing when he offered half of his burger as a peace offering, and she stuck some of her homemade kimchi on top of his burger to cut the grease.

Even crazy Soo Ji is growing on me. Between smacking herself up while learning to ride a bike, and her sweaty chase after the guys, I have to agree with Sang Woo: Soo Ji is more fun.

I had this dish at Tosokchon in Seoul, and was not impressed, but I should probably try it a second time before deciding it is not to my taste.