Skip to content
Side dish: You will have to figure out Soon Ae’s bean powder salmon pancake by yourself, but here’s a recipe for Korean buckwheat pancake to get you started. 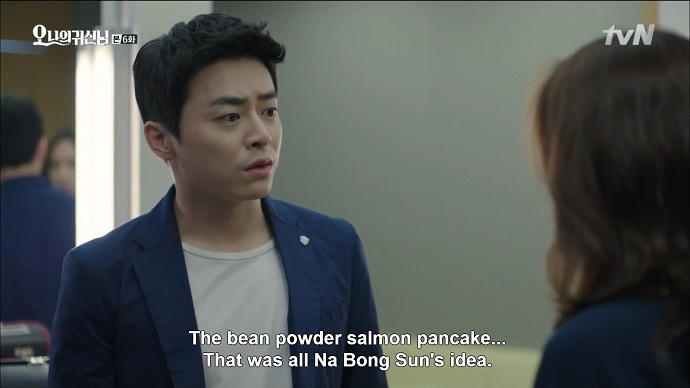 After the show, Sun Woo is approached by his friend, PD So Hyeong (Park Jung Ah) who is worried about Bong Sun’s erratic behaviour during filming. She proposes replacing Bong Sun, and to her surprise, Sun Woo vehemently refuses.

Soon Ae is relieved to find out that her father, Myeong Ho is out of danger, but learns that he is suffering from liver disease due to excessive alcohol consumption. Soon Ae’s brother, Gyeong Mo shows up and she reprimands him for failing to look after their father. After getting his head slapped, Gyeong Mo is convinced that this strange girl is in love with him. 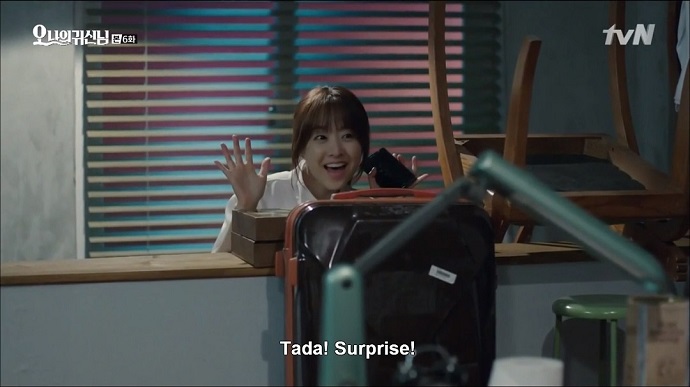 Sun Woo is fretting about where Bong Sun is when Soon Ae shows up in Bong Sun’s body, but acting exactly like herself. Soon Ae is all sexual innuendo and harassment, and Sun Woo just assumes that Bong Sun has returned to her manic state. Thinking of her future on the TV competition as well as her career, he offers to train her properly in the basics of the culinary arts. They start with knife handling, and Soon Ae ends up chopping mounds of vegetables while practising.

The next day, Sun Woo pulls the dish created by sous chef, Min Soo (Kang Ki Young) from the daily special in order to use Soon Ae’s chopped up vegetables. Sun Woo keeps his tutoring of Soon Ae a secret from his employees.

Policeman, Sung Jae (Im Ju Hwan) stops by Myeong Ho’s restaurant just as the older man returns from the hospital. Sung Jae carefully asks who called for assistance, and all Myeong Ho knows is that the caller was identified as his daughter. Sung Jae acts concerned, but once outside the restaurant, he angrily whips the drink that Myeong Ho gave him into the windshield of a car. 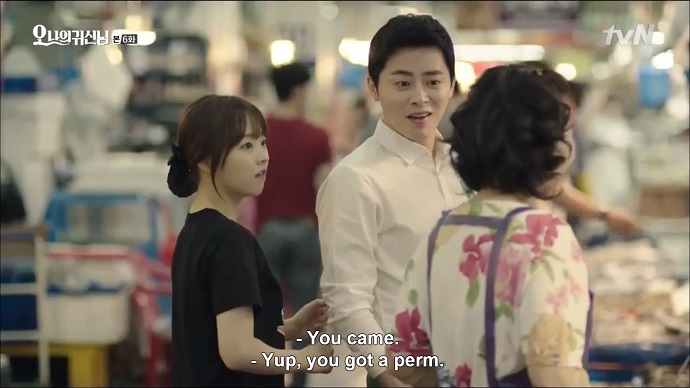 Sun Woo takes Soon Ae along to the seafood market as part of her schooling, and she sees his flirty side with the ahjummas. While they are having lunch, Sun Woo runs into a former school classmate. An uncomfortable looking Sun Woo invites the man and their fellow students to have dinner at his restaurant. His memories reveal that these same students once bullied Sun Woo.

Sun Woo’s sister, Eun Hee and Sung Jae, her husband, return home after learning that she is still not pregnant. He is bothered by Bong Sun’s seeming lapses in memory, and asks Eun Hee how close Bong Sun is with Sun Woo. Eun Hee confirms that Bong Sun has changed of late. After Sung Jae leaves, Eun Hee finds a broken cell phone. It brings to mind the fact that Soon Ae’s cell phone is missing, and Myeong Ho continues to pay the phone bill maintain it. Eun Hee simply puts the phone way.

At Sun Restaurant, Sun Woo anxiously prepares the restaurant and the menu for his former classmates. When they arrive, they are suitably impressed, but Sun Woo focuses on Chul Min, the former school bully. He takes pot shots at Chul Min about his bullying, and his current pudgy physique.

Chul Min leaves the dinner early for business, and while Sun Woo is seeing him out, Soon Ae overhears his former classmates discuss how Sun Woo was bullied in the past. Meanwhile, outside the restaurant, Chul Min reveals that he is a vacuum salesman, and he sheepishly asks Sun Woo to send some business his way. Sun Woo’s anger quickly dissipates in the face of Chul Min’s current sad reality.

That night, Sun Woo sits alone in the dark restaurant. He is unresponsive when Soon Ae asks that they continue their lesson. Undeterred, Soon Ae cooks buckwheat pancake for him, and forces him to eat. Without revealing her knowledge that he was once the target of bullying, Soon Ae encourages Sun Woo to forgive and forget, because life is short, and over before you know it. Later, Sun Woo calls up Chul Min about his work connections, but Chul Min offers an apology instead, which appears to help Sun Woo put the past behind him.

Sun Woo appears to be softening towards Soon Ae. He agrees to take a selfie with her, listens to her advice about mending his relationship with Min Soo, then proposes taking her to a buckwheat pancake restaurant for educational purposes tomorrow evening.

The next day, Soon Ae checks in on her father, and he now appears more receptive to care and attention from this young woman who reminds him of his late daughter. They visit a park that Soon Ae used to frequent when she was alive, and Myeong Ho expresses regret over failing to join her at the park.

Fellow chef, Joon has repeatedly been made aware of the change in the relationship between Soon Ae and Sun Woo. He takes Soon Ae aside to express concern that she will get hurt. Soon Ae only notices how cute Joon is.

Soon Ae prepares for the buckwheat pancake dinner with Sun Woo like a date, hoping that it will end with sex. On her way to meet Sun Woo, Soon Ae is found by shaman, Suhbingo who recognizes her immediately. While trying to escape Suhbingo, Soon Ae gets separated from Bong Sun again. Thus, Bong Sun comes face to face with Sun Woo without any context for what appears to be a date with her long-time crush.

Junggugeo Kaenada 중국어 캐나다: I instantly preferred this episode to the previous one, because Soon Ae was back in Bong Sun’s body. It appears that the people around her felt the same way.

Only 만: Poor Bong Sun. I don’t love her character, but I’m also not enamored of the idea that we’re just going to get Soon Ae for long stretches of time. As much as I enjoy Soon Ae, her relentless harassment campaign is a bit tiring. Plus, I’m glad Bong Sun is returning to the story again, because it is her body in the end.

Junggugeo Kaenada: I agree that Soon Ae’s sexual harassment of Sun Woo was repetitive, and yet, I could not help but enjoy it, especially in combination with Sun Woo’s rote dismissal. That fantasy sequence springing from Soon Ae’s imagination sure had heat. Unfortunately, I do not think we will ever get there with this couple.

Only: That fantasy sequence was pretty good, but the reality of the show is pretty different. His attitude towards Soon Ae is on a par with the dog he found, like he’s feeding her and being nice, but there’s a distance there.

Junggugeo Kaenada: Speaking of the dog, how do we explain the fact that it is no longer barking at Soon Ae while she occupies Bong Sun’s body?

Only: Maybe the dog got used to her presence? Otherwise we’d be listening to a barking dog for long stretches of the show.

Junggugeo Kaenada: Until they reveal more, we will just have to settle for that. The mystery around Sung Jae grows; we find out that he actively wishes harm on Myeong Ho, and that he might be holding on to Soon Ae’s cell phone. 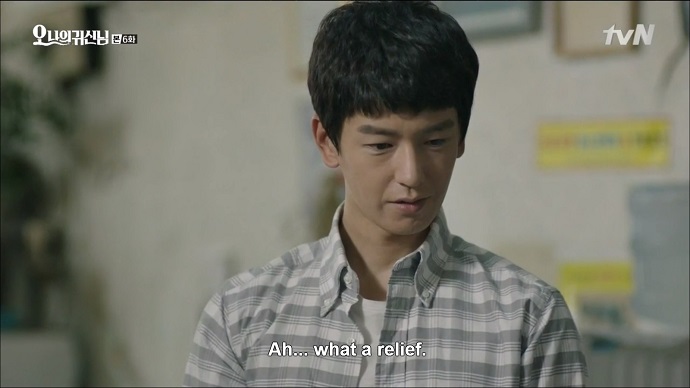 Only: How creepy. I have many pet theories about Sung Jae at the moment, but I’ll wait and see what happens. But, speaking of tall and handsome people, why do you think Joon was warning Soon Ae off of Sun Woo? Is he interested?

Junggugeo Kaenada: I think Joon is concerned, but he is not ruled by his feelings if he has any. It is refreshing to see a potential secondary male lead not become possessive nor make decisions for the female lead’s own good. He simply makes his concerns known while acknowledging that it is none of his business.

I am glad to see Myeong Ho allowing Soon Ae in the guise of Bong Sun to get closer to him, but it is really just a set up to heartache.

Only: Like you said in the last recap, Soon Ae is a competent and likeable character. But, she’s also impulsive and thoughtless. She can’t resist jumping back into her family’s life, but she hasn’t considered the consequences of it at all.

Junggugeo Kaenada: How did you feel about Sun Woo’s big production reunion with the schoolmates who tormented him? Did it add depth to his character or just pour salt on a wound that we were already aware of?

Only: His desperation to impress them was not surprising, though the extent of it was more than I expected. But, I guess closure is more what we were after there; discovering that your former bully is a bit of a sad sack will do that for you. 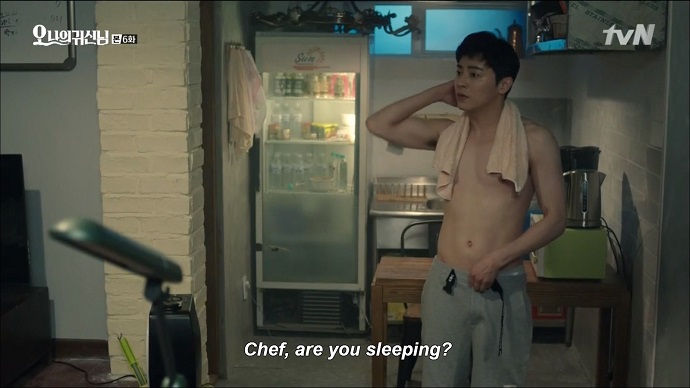 Junggugeo Kaenada: I have a growing appreciation for Jo Jung Seok’s depiction of Sun Woo. He was able to maintain the same level of reserve while still clearly convey a wide range of emotions from a growing affection for Soon Ae to the anxiety and anger driving the reunion dinner.

Only: Jo Jung Seok can convey a surprising amount with his perpetually harried expression. At this point, I feel like the only character I haven’t gotten any insight on is Bong Sun. I hope her return next week gives us something more than how sad, lonely, and scared she is all the time.

Junggugeo Kaenada: Yes, and I think it is time for Soon Ae to approach Sun Woo with a different tactic. Let’s see some development in both of our leading ladies.