Skip to content
Side dish: Sun Woo says that he can eat swiss rolls morning, noon and night. Buying that many swiss rolls can be costly, so he could make his own following this recipe for a Chocolate-Raspberry Swiss Roll.

Timid chef, Bong Sun (Park Bo Young) runs straight into her boss, chef Sun Woo (Jo Jung Seok) who complains about having to wait for her. Bong Sun apologizes profusely, and Sun Woo assumes that she is past her manic phase, and is now depressed, again. Bong Sun delicately attempts to catch up on what has happened while virgin ghost, Soon Ae (Ki Seul Gi) had possession of her body. To her relief, the cooking show competition worked out, and she is shocked to find a selfie of her with Sun Woo on her phone. 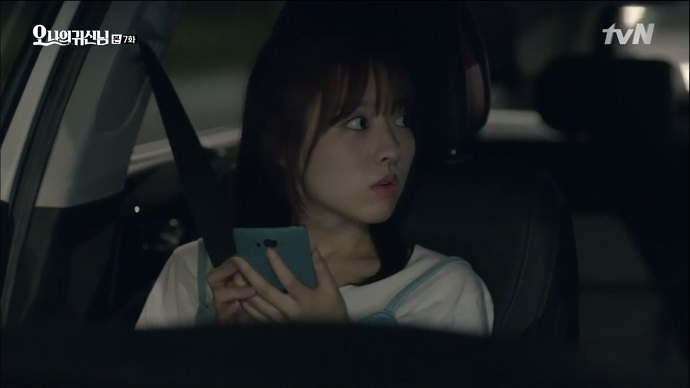 As planned, Sun Woo takes Bong Sun to a restaurant known for its buckwheat pancake, and gives a lecture as they eat. Bong Sun remembers how her boss used to disregard her. Now, he’s advising her to to demand respect from her fellow chefs. After dinner, a busker singing and playing an acoustic guitar catches Bong Sun’s attention, but Sun Woo drags her away. They return to their respective rooms above Sun Restaurant, and Sun Woo feels compelled to whip out an acoustic guitar to prove his own talent. Bong Sun listens appreciatively through their shared wall.

Meanwhile, Soon Ae is captured by shaman, Suhbingo, and pleads to be let go so that she can lose her virginity. She reveals that she has found a man of vitality, but when Suhbingo finds out that it’s Sun Woo, she refuses to let Soon Ae sleep with him, because she is friends with Sun Woo’s mother.

The next morning, Sun Woo wakes Bong Sun up to go work out, insisting that she needs to be more fit for the kitchen. He rents bikes for them to ride, then finds out that Bong Sun doesn’t know how to ride a bike. Sun Woo is forced to teach her in between his outbursts of frustration.

While Sun Woo is attempting to turn a vending machine purchase into another lesson, a thief steals his bike seat. Sun Woo and Bong Sun leave their bikes at the mercy of more ambitious thieves in favour of running up and down the hills of Seoul after the bike seat thief. Bong Sun manages to head off the thief then stop him by chomping down on his leg until Sun Woo arrives to make a citizen’s arrest. 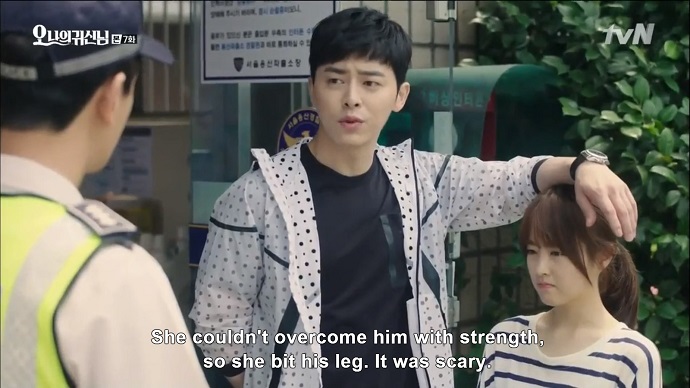 It turns out that the bike seat thief is known to police. Speaking with his brother-in-law, policeman Sung Jae (Im Ju Hwan), Sun Woo gives credit to Bong Sun for the arrest, then slips in some credit for his exercise training of her. Sung Jae is surprised by how close they appear to be. Indeed, Sun Woo seems tickled pink by this happier version of Bong Sun.

Sun Woo is having a swiss roll for breakfast with Bong Sun when his friend, PD So Hyeong (Park Jung Ah) shows up unexpectedly with a swiss roll. So Hyeong attempts to hide her dismay at finding out that Bong Sun is living at the restaurant. So Hyeong asks him if she should go out on a date with a work colleague, and Sun Woo feigns indifference while encouraging her.

Soon Ae gets dragged to a memorial rite conducted by Suhbingo. A black spirit comes out of Soon Ae in a fit of anger and desperation, bringing the ceremony to a halt. Suhbingo returns home to tend to the cut on her cheek that resulted from the evil spirit’s violent appearance. She warns Soon Ae that with only a few months to go before the third anniversary of her death, an evil spirit is starting to manifest within her.

Bong Sun runs into Sung Jae outside Sun Restaurant, and he offers to buy her a nighttime snack. On her way to meet Sung Jae at a pojangmacha, Bong Sun walks right past Soon Ae’s father, Myeong Ho, and brother, Gyeong Mo. The men, who were just talking about how much they miss Bong Sun, stop her, but Bong Sun acts like she has never seen them before. Gyeong Mo is outraged by this perceived snub, but Myeong Ho is troubled by this change in Bong Sun.

Sung Jae also marvels at how different Bong Sun’s two personalities are, over dinner. Bong Sun struggles to explain it, and when Sung Jae appears sympathetic, she is tempted to reveal Soon Ae’s possession of her. In the end, Bong Sun chooses not to say anything.

Sun Woo is tricked by his mother into paying her a visit. She offers him a home cooked meal of burnt toast. Sun Woo’s sister and Sung Jae attempt to be appreciative of the effort, while Sun Woo mocks her. Mom then gets hung up on whether Sun Woo is wearing the ghost busting underwear she bought him, and Sun Woo runs away in protest as his mother attempts to manhandle him. 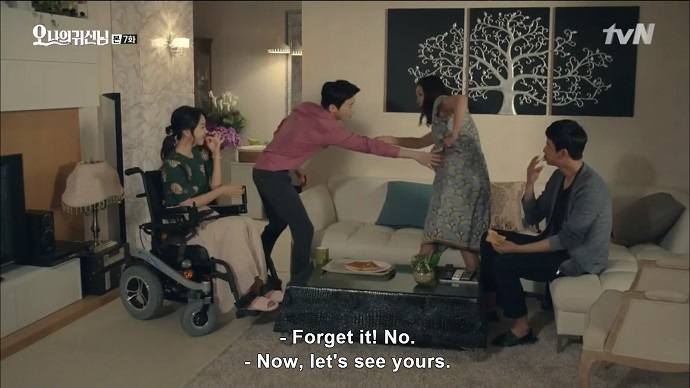 Sun Woo’s chefs assume that he and So Hyeong are dating after seeing them together. So, they are flabbergasted when So Hyeong shows up with a date at Sun Restaurant. They wonder if So Hyeong is trying to provoke Sun Woo to jealousy, and it appears that they are right. So Hyeong runs into Sun Woo outside the washroom, and asks for his opinion of her date. Sun Woo plays it cool and encourages her to keep seeing him. This prompts a frustrated So Hyeong to make an outburst about Sun Woo not caring. Later, her words continue to echo in Sun Woo’s head. 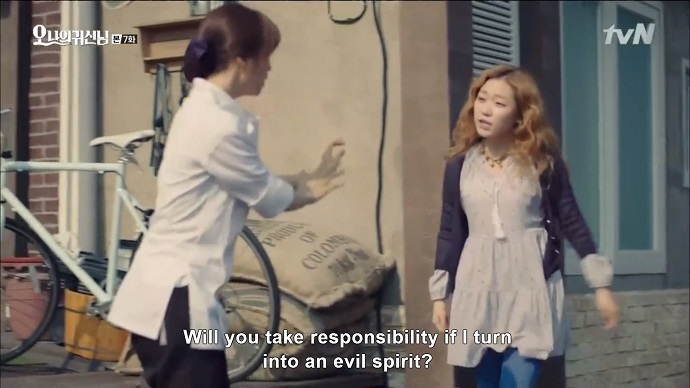 Suhbingo takes pity on Soon Ae and despite feeling guilty towards Sun Woo’s mother, she allows Soon Ae to escape. Soon Ae goes straight to Sun Restaurant where she attempts to possess Bong Sun. During the chase, Bong Sun’s scrapbook of love for Sun Woo is exposed. Soon Ae offers to strike a deal; if Bong Sun will let her possess her body then she will seduce Sun Woo for her, since, she insists, Bong Sun would never be capable of doing it by herself. Soon Ae points out that it is only a matter of time before Sun Woo is snatched up by So Hyeong, but Bong Sun still refuses her offer.

Soon Ae spends time with her father, afraid that she will no longer remember him once she becomes an evil spirit. She commiserates with a fellow ghost over a meal at a funeral home, wondering if she should just give up and undergo the memorial rite in order to pass over.

Bong Sun continues to receive lessons from an enthusiastic Sun Woo on the range of flavours in different types of salts and olive oils, and how to cut the stem off a tomato. Leaving Bong Sun to practice, Sun Woo steps outside to discover that So Hyeong had ditched her date to get drunk by herself. Fueled by liquid courage, So Hyeong asks if he is really okay with her being with another man. She admits to being jealous of his attention towards Bong Sun, then suddenly kisses him. Sun Woo appears bothered by the kiss, but Bong Sun can only see her chance with Sun Woo slipping away.

Bong Sun goes on a frantic hunt for Soon Ae. When she finally finds the ghost, a desperate Bong Sun gives her permission to possess her in order to make Sun Woo hers.

Junggugeo Kaenada 중국어 캐나다: I was put off by the behaviour of a number of the characters in episode 7. It is too bad that this has come about just as Bong Sun has a chance to finally interact with the rest of the characters.

Only 만: Yes, it was nice to see Bong Sun come out of her shell a little bit and have a normal conversation with Sun Woo. But, there were so many other things going on, I didn’t have much time to appreciate it.

Junggugeo Kaenada: A big distraction was Sun Woo playing the role of cooking and life coach extraordinaire. It made me cringe to see how thrilled Sun Woo was to have a more pliable Bong Sun back. He couldn’t stop teaching her things, but doing it in a way that was condescending.

Only: I guess it’s nice to have someone look at you so adoringly without having to feel like your chastity is in danger. For me, it felt a little abrupt that Sun Woo was suddenly so enamoured with the shy Bong Sun when Soon Ae had done all the work in breaking the ice between them.

Junggugeo Kaenada: You know what else was abrupt? So Hyeong’s interest in taking her friendship with Sun Woo to the next level. Sun Woo has been pining after her for more than 10 years, and now, it bothers her that he doesn’t care whether she dates or not?

Only: Wasn’t she concerned about his sudden closeness with Bong Sun, too? I have two problems with this: First, her concern came out of nowhere, especially the drunken kiss. Second, am I meant to believe that Sun Woo has not had a relationship for the entire length of their friendship? This may sound like a ridiculous and crass question, but is he a virgin?

Junggugeo Kaenada: Well, it doesn’t appear that So Hyeong has dated anyone either in the interim. Otherwise, Sun Woo would not have reacted so badly to her first date with another guy.

Let’s forget about the misbehaviour of Sun Woo and So Hyeong, and give some attention to Bong Sun. How did you like her time out in the world during this episode?

Only: Bong Sun was surprisingly entertaining. The bike riding was pretty funny, but not as funny as when she dragged the bike seat thief down and bit him. I actually thought, “There is some hope for this character.”

Junggugeo Kaenada: Bong Sun was definitely more entertaining and resourceful than we have seen previously. I enjoyed it when Sun Woo tried to teach her how to find random change, and she figured out, on her own, how to find additional coins by knocking the vending machine.

Only: That was pretty entertaining, if also abrupt. I enjoyed it, but I was as surprised as Sun Woo was that Bong Sun had it in her.

Junggugeo Kaenada: Well, if it felt rushed, it may be because the writers knew that Bong Sun was about to be subsumed by Soon Ae again. Though, I think they did a good job conveying Soon Ae’s despair at becoming an evil spirit, so that I am not entirely averse to having her possess Bong Sun again.

Only: I think for once, we have a meeting of minds on the possession. I’m not convinced that it’s a good idea at all, but at least Bong Sun consented to it. On the other hand, I can’t really see Bong Sun and Soon Ae’s idea working on Sun Woo. From this episode, he genuinely seems to enjoy being with Bong Sun when she’s not nervous more than he does with Soon Ae.

Junggugeo Kaenada: While I am happy for Bong Sun that she gets along with Sun Woo as herself, it makes me lose a little respect for Sun Woo. Not that I thought his relationship with Soon Ae was better, but at least he was challenged by her. With Bong Sun, he just seems to bask in the glow of her adoration.

Only: I’d be flabbergasted if Sun Woo could tell what he was attracted to, between Bong Sun’s “mood swings”. All I know is that I missed chef, Cordon’s pretty face making verbal jabs at Min Soo.