Skip to content
Side dish: Pretty Hae Young pitches bread and castella as new offerings at the restaurant chain. Don’t wait for the company to offer castella. Make your own using this Castella Cake Recipe. 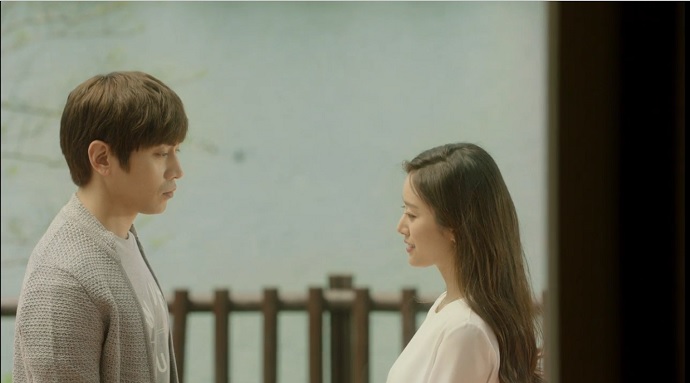 Do Kyung (Eric Mun) meets up with his ex-fiancée, Hae Young (Jeon Hye Bin) and tries to convince her that, for him, pity is tantamount to love. However, Hae Young does not want to be pitied by the man she loves, and hence, she would prefer to move on rather than rekindle their relationship. However, Hae Young wants to leave on good terms. She suggests a game of ping pong, which they used to play, and she won all the time. Do Kyung is silent and grim as he remembers the good old days.

Do Kyung calls up his friend, Jin Sang (Kim Ji Seok) to confirm that the man he put in jail, Han Tae Jin (Lee Jae Yoon) has just been released. Jin Sang is perplexed by Do Kyung’s advance knowledge, not knowing that Do Kyung foresaw the event in his visions. 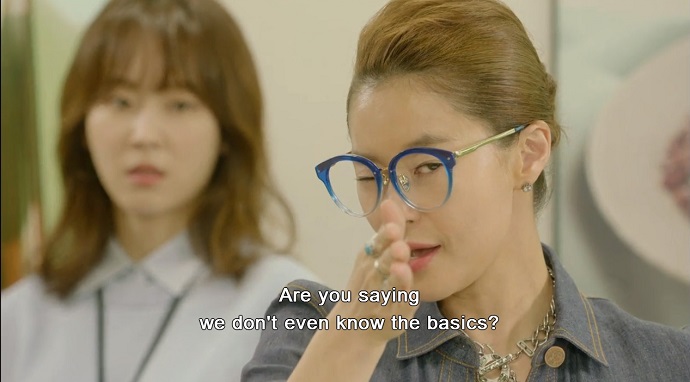 At a product pitch meeting, pretty Hae Young proposes that their chain of Korean restaurants offer baked goods like salad bread and castella. Plain Hae Young (Seo Hyun Jin) suggests traditional rice soup dishes, which her boss, Soo Kyung (Ye Ji Won) objects to. She calls Hae Young a one-trick pony, and orders her to study current trends to come up with a better proposal or get fired.

Plain Hae Young does not defend herself, but luckily for her, her colleague does the job. He points out to Soo Kyung that Hae Young was the one who came up with the profitable idea of opening up Korean restaurants when other companies were doing Western style. Soo Kyung simply says that Hae Young should stand up for herself.

Tae Jin finds Hae Young sitting at a bus stop, and it is an awkward reunion. She offers to have a meal with him out of habit, but he agrees that it is a good idea, and says he’ll call her. Just before he drives away, Hae Young spots a young woman in the passenger seat smiling at her. Hae Young’s face falls, and she goes to eat and drink alone. 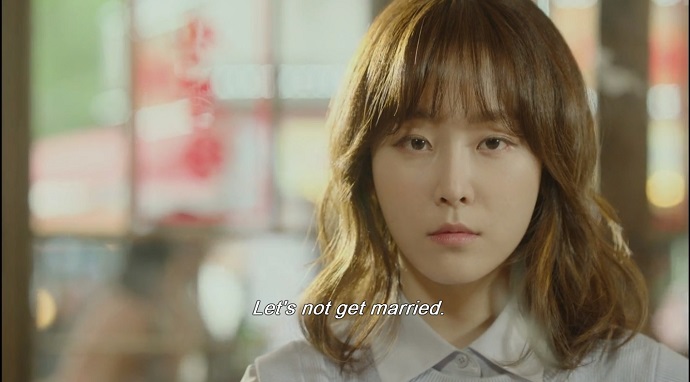 Do Kyung calls Soo Kyung to confirm what plain Hae Young is wearing that day. It appears to match up with what she is wearing in his vision. He searches for the location from his vision, and arrives in time to watch a tipsy Hae Young make an unsafe crossing of the road. He follows in her dangerous footsteps, and stops her to ask where she is going. Hae Young claims to be going for food.

Do Kyung watches Hae Young sleepily stuff her face, and when he stops her eating, she starts to drink soju. She voices her confusion over why he is with her if he does not like her, and how he keeps popping up wherever she is. As Do Kyung had foreseen, Hae Young laments meeting up with Tae Jin.

Back home, Do Kyung listens to Hae Young pray to the porcelain gods then struggle to get into bed. He enters her apartment with medication, but she has already passed out, and is crying in her sleep. 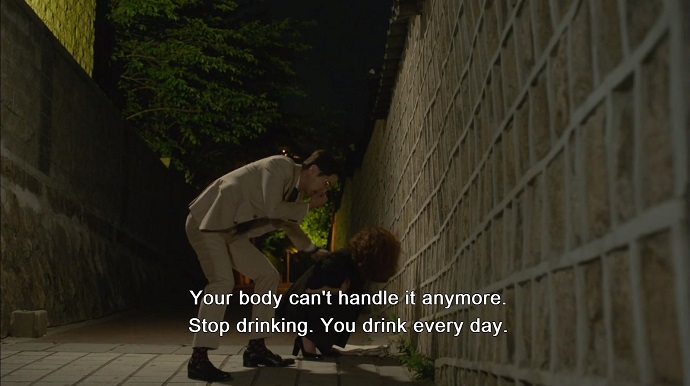 Soo Kyung is getting drunk at her usual establishment when the waitress informs her that she missed the man she used to come with, and that he came for one last visit with the intention of moving to Brazil next week. Soo Kyung is wailing on the street when Jin Sang drives by and spots her. He reluctantly goes to comfort her, and is surprised to realize that she is crying and speaking French. It turns out that Jin Sang also speaks French, but pretended not to understand out of courtesy. Jin Sang also knows Soo Kyung’s entire love affair with a married man, and he advises her to see the man one last time before he departs.

Meanwhile, Do Kyung’s brother, Hoon (Heo Jeong Min) is at the beach with his girlfriend, Anna (Heo Young Ji), but not at the seaside location that Do Kyung had ordered him to go to for sound recording. Anna convinces him to simply enjoy their outing, but when they sit down to their picnic, Hoon is upset to learn that Anna has dated 15 men. None of the relationships lasted, because the boyfriends failed to live by her motto, “Try everything” on their 100 day anniversary. Hoon spits out his drink when he learns that for their 100 day anniversary, Anna wants to move in together. 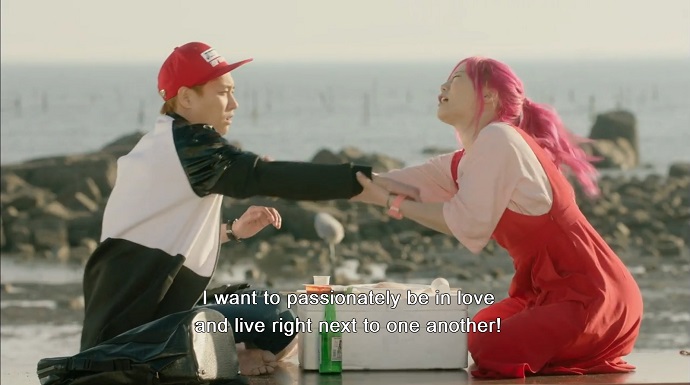 Hae Young’s mother, Duk Yi (Kim Mi Kyung) gets a phone call and rushes out to meet with Tae Jin’s mother, who is unaware that the lack of communication between her and her son is due to his incarceration. Tae Jin’s mother holds no ill will towards Hae Young for cancelling the wedding last minute; in fact, she wonders if Hae Young’s mind can be changed.

Back home, Duk Yi talks about the possibility of Hae Young marrying Tae Jin with her husband, Kyung Soo (Lee Han Wi). She is against the idea, but Kyung Soo points out that the decision should be Hae Young’s.

Hae Young gets the call from her mother to stop by, and is told about Duk Yi’s meeting with Tae Jin’s mother. Duk Yi asks Hae Young to see Tae Jin once, out of courtesy. Hae Young breaks down into tears, and finally admits that she was dumped by Tae Jin, and lied to save face. Then, it is her parents’ turn to cry in their bedroom over guilt at how they lambasted Hae Young about dumping Tae Jin.

Do Kyung is holding back from calling Hae Young when he spots Tae Jin coming to the front gates of their home before driving away without making contact with Hae Young. Do Kyung follows in his car, and thinking of how Hae Young cried about the things Tae Jin said to her, purposely rear ends Tae Jin. 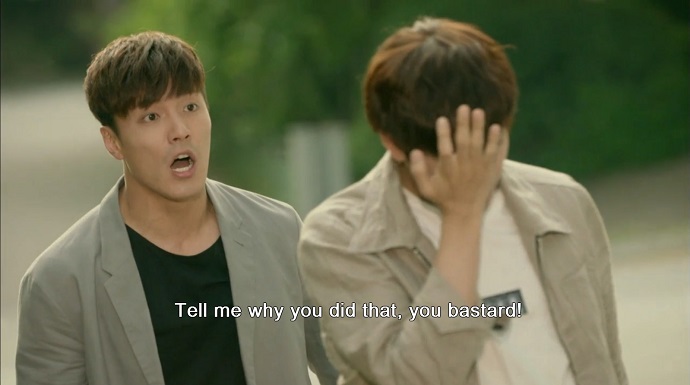 Tae Jin recognizes Do Kyung and demands to know what he did to deserve having his business ruined. Do Kyung admits that ruining Tae Jin’s business was a mistake, but the collision was intentional. Since Do Kyung refuses to divulge more, the encounter dissolves into a slug fest until police intervene. Do Kyung continues to scream at Tae Jin for the terrible things he said.

Hae Young gets dragged out of her funk by her parents to alternate between singing their hearts out at karaoke and tearful apologies. While Hae Young’s parents go to get beer, Hae Young gets a call from Do Kyung asking her to come home, but Hae Young refuses unless Do Kyung admits that he misses her.

Hae Young hangs up on Do Kyung, and Do Kyung gets a premonition of a car accident. He calls Hae Young again to demand to know where she is. When she refuses to reveal her location, he uses the sounds in the background to figure it out that she is by the Han River.

Hae Young receives Do Kyung’s text to stay put, and sends her parents home ahead of her. Thus, Do Kyung is able to find her at the Han River docks, and after being kept apart by a steady stream of cyclists, they walk together at opposite sides of the path. Even in the subway, they stand apart. Hae Young asks if he got into a fight, but Do Kyung stays silent.

Hae Young tells Do Kyung that her parents now know the truth about who called off the wedding. She does not want to traumatize them further by having them find out that she retains feelings for Do Kyung. When she announces that she will be ending their relationship, Do Kyung can only respond with a warning to watch out for cars before leaving.

Do Kyung wakes up with a start from a car accident nightmare again. He goes to speak with his doctor about hearing and feeling the pain of a collision, but it is not accompanied by the usual vision of Hae Young. It is enough give Do Kyung pause when he is about to drive. Then, he shocked to receive a vision of fighting with Hae Young before kissing her. 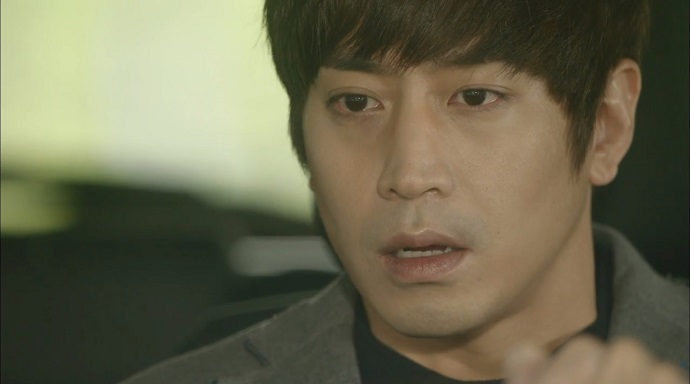 The love triangle of Do Kyung, Tae Jin and Hae Young is getting me excited, because it is more viable than the love triangle of Do Kyung and the two Hae Youngs ever was. Also, it is quickly escalating into juicy drama. I like that Do Kyung is already pulling crazy stunts like purposely rear ending Tae Jin’s car without explaining his reasons for the collision nor for destroying the man’s life. Tae Jin took it all pretty well considering.

The episode featured the requisite Kdrama weeping, but alternated it with cathartic karaoke, so this made the tears entirely acceptable, and even enjoyable. Hae Young’s parents may be one of my favourite Kdrama parents yet with their repeat attempts to remain strict with Hae Young before giving in to their parental concerns in spectacular fashion.

The only characters that I care little about is Hoon and Anna. However, I will give Anna points for being the only manic pixie dream girl that I can remember seeing in a Kdrama.

Let’s hope that Jin Sang and Soo Kyung get together soon. When crazy collide, en français, it can only be entertaining.