Skip to content
Side dish: This episode was pretty sweet, so what we suggest but dessert? Here’s a recipe for Chocolate and Zucchini cake from Apt. 2B Baking Co.

In the aftermath of their kiss, Do Kyung (Eric Mun) sits in a park and remembers playing with his dad when he was a kid (it’s a cameo from Lee Pil Mo!). Hae Young (Seo Hyun Jin), meanwhile, does laundry in a bid to forget that Do Kyung hasn’t yet called her. When she does get a call, reality comes crashing back in: it’s her newly returned boyfriend, Tae Jin (Lee Jae Yoon). Hae Young reluctantly agrees to meet him for a meal.

Before she can leave, her mother, Duk Yi (Kim Mi Kyung) berates her for how she’s acting, and reminds her that she won’t accept either Do Kyung or Tae Jin. Hae Young leaves without answering.

Hae Young, on the other hand, broods while sitting on the bus, then cancels her date with Tae Jin, citing work as the reason. Tae Jin looks disappointed as he sits in a restaurant by himself.

On his way home from meeting with the psychiatrist, Do Kyung runs into his sister, Soo Kyung (Ye Ji Won), who is drunkenly muttering to herself in French again. When he yells at her over her drinking, Soo Kyung answers that her life is too embarrassing for her to live sober. As she thinks back in horror to her drunken encounter with Jin Sang (Kim Ji Seok), Jin Sang himself shows up and drunkenly sings his congratulations to her. He explains that he’s found her the perfect man, a man with a good salary and a big apartment, who likes being beaten up. Jin Sang turns away from Soo Kyung and starts peeing in the street. Appalled, Soo Kyung informs him that she’s a woman, too and runs off. A confused Jin Sang is just pouring out a water bottle. 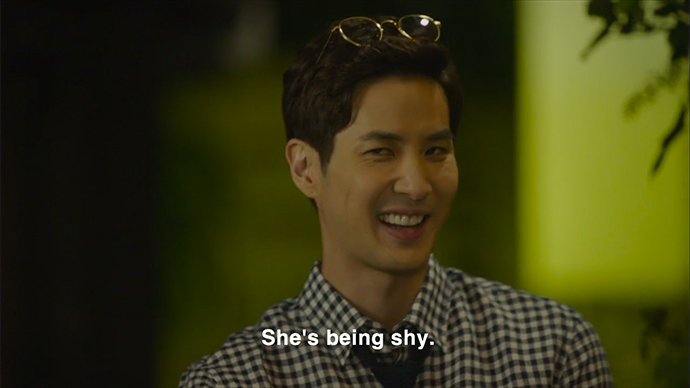 Everyone is getting drunk today, as Do Kyung chugs beers in his apartment, and Hae Young has a drink with her friend, Hee Ran (Ha Shi Eun). Her friend counsels her to be patient and let Do Kyung sort his feelings out, since he obviously likes her. Hae Young has trouble holding back her longing, and even goes so far as to go back to her apartment, next door to Do Kyung. She can’t make up her mind what to do when she gets there, though, and ends up leaving instead.

Back in his apartment, Do Kyung can’t get the psychiatrist’s words out of his head, that he’s in a car accident and missing Hae Young before he dies. He has another vision of the accident, of himself on the ground bleeding.

Do Kyung’s brother, Hoon (Heo Jeong Min) shows his movie script to his girlfriend, An Na (Heo Young Ji). She’s excited at how great it is, but annoyed that his prospective producer is a woman. When she asks why Hoon can’t work with his mother, instead, Hoon looks doubtful.

Hoon meets with Hee Ran to produce his script. When she expresses enthusiasm in his ideas, he asks her to keep it a secret from Do Kyung. Do Kyung, meanwhile, is having a less enjoyable run-in with his mother, Ji Ya (Nam Gi Ae) who insists that he attend Chairman Jang’s birthday party. Instead, he tells her that she doesn’t need to marry the womanizing Chairman Jang, and could come home to her family instead. Ji Ya is appalled at this idea, terrified that she’ll be poor and dependent in her old age. As Do Kyung leaves the office, he’s almost run over by one of his co-workers, then goes to get a coffee to calm his nerves. At the café, he spots Hee Ran, looking unimpressed while reading Hoon’s script. When he confronts her about it, she bluntly tells him that the level of Hoon’s writing is not high. 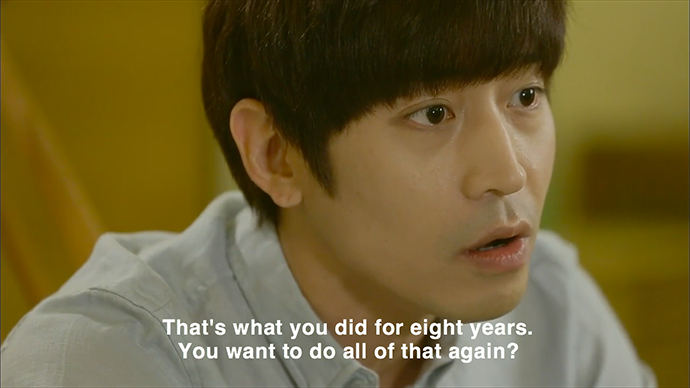 Back at the house, Do Kyung tells Hoon not to try directing, and to just learn to be a sound producer so he won’t be belittled anymore. When Do Kyung calls Hoon’s script embarrassing, Hoon tells him to back off, that he’s doing what he wants with his life. He asks Do Kyung what the point of his pride is, since he only has one life. Hoon goes to see An Na, who decides to kill Do Kyung on the spot for being such a jerk.

Do Kyung thinks back to a childhood memory of his father, when a younger Ji Ya (Lee Yu Ri) belittled him in front of Do Kyung. He remembers his father taking him out to a cliffside to record sounds, and then accidentally falling off when a microphone started wobbling. Do Kyung remembers finding his father’s body on the beach at the bottom of the cliff, and then dragging him back to the car, then pushing the car until help finally showed up. 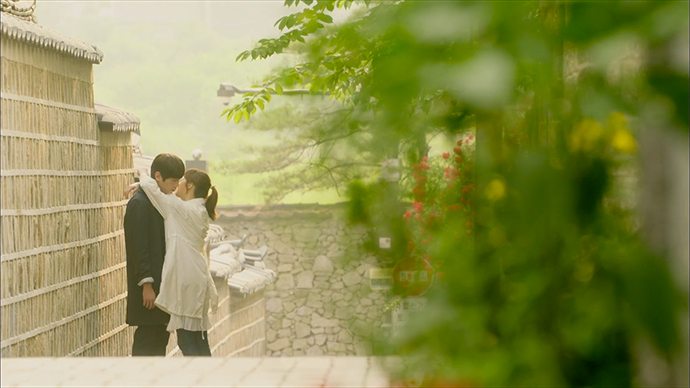 As he runs, Do Kyung remembers his father reminding him that when you realize everything is transient, then you don’t worry about unimportant things. With that thought in mind, Do Kyung calls Hae Young, and tells her to come to him. When she tells him she’s not that easy, he responds that he misses her, as a tear tracks down his cheek. This is enough for Hae Young, who drops everything and comes running to find him. The two of them can’t stop smiling at each other when she arrives, and when she asks him what he wants now that he knows she’s so easy that she’ll come when he calls, Do Kyung asks for a hug. Hae Young easily gives him one.

The two of them take a drive to the beach, where Hae Young asks Do Kyung when he fell for her. When she theorizes that he liked her at first sight, he admits that it was when she told him about voting for herself at the school election, that she was able to admit something so embarrassing to him. This admission prompts Hae Young to start recounting all of her embarrassing stories. 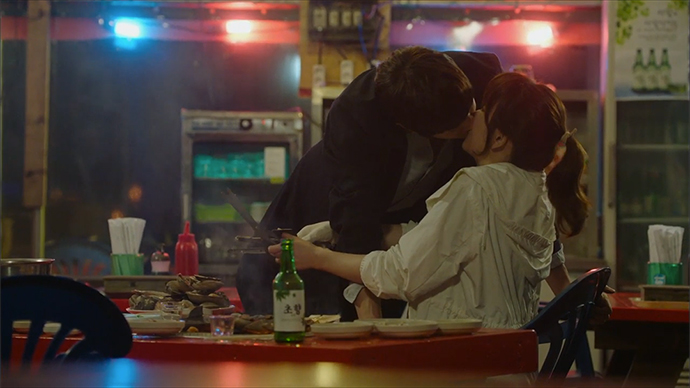 They go for seafood barbecue (which almost makes me start tearing up from memories of Jae Bu Do in Los Angeles), and Do Kyung tells Hae Young about how much he enjoyed the awkward meal with her parents, because her mom put meat on his rice. Hae Young promises to put endless amounts of food on his plate, and unable to contain himself, Do Kyung comes around the table and kisses her. The two of them make out, as delicious seafood barbecue goes to waste.

As Soo Kyung drunkenly walks home, Jin Sang pulls up and gets out of the car to show off his outfit, since he’s on his way to pick up women at a rooftop party. As he dances around, Soo Kyung is mesmerized by his butt, but she waves her fascination away as he takes off and she carries on walking home. On her way, she runs into the neighbourhood watch ladies, and coerces them into walking her home. Once there, Soo Kyung forcibly asks them for advice about what to do when you fall in love with a womanizing loser, since she falls for everyone she sleeps with. The women have no response, and Soo Kyung chases them out of the house.

Hoon is still complaining about Do Kyung to An Na over dinner, but when she finds out that Hoon and Do Kyung are not actually blood related, but stepbrothers, An Na’s opinion of Do Kyung changes. To make up for her flip-flop, An Na attacks Hoon with kisses.

Back at the beach town, the mood seems good as a drunken Do Kyung can’t stop hugging Hae Young. When Hae Young tries to make the suggestion that they stay somewhere for the night, Do Kyung announces that he’s already called a driver to take them back to Seoul. Hae Young tries to argue against it, but ends up in the car with Do Kyung, being driven back. She’s only mollified when Do Kyung points out that they can have their first night together next time, somewhere nicer than a motel.

The next morning, still in the car, Do Kyung wakes up to find Hae Young asleep with her head in his lap. In voiceover, he vows to go all the way with her.

Well, that was easy. I mean, don’t get me wrong, I’m glad they explained the visions, instead of just leaving them hanging in mid-air, but it felt a little too pat, and Do Kyung’s apparent acceptance of this explanation felt a little too easy. Why set up a mystery if you’re just going to have a minor character explain it all away for you? Here’s hoping that the psychiatrist is wrong, or there’s something here we haven’t yet figured out.

That aside, I want to enjoy the skinship and Do Kyung and Hae Young being cute, but I’m finding it difficult. Yes, it was a great kiss and they are pretty sweet together, but all I can see in the back of my mind is everything that Do Kyung hasn’t communicated to Hae Young: everything about what he did to Tae Jin, everything about his family, everything about what happened with pretty Hae Young, and especially everything about the fact that he thinks he’s going to die soon. I can only presume we’re being given this charming interlude to prepare us for the tidal wave of angst coming our way, when all this stuff comes out into the open. Don’t forget; we still have eight episodes to fill (stupid extension).

In the meantime, let’s briefly look back at Lee Pil Mo and remember how cute he is.