Skip to content
Side dish: I’m not sure why anyone would make homemade Pocky, but if you follow this recipe from Ochikeron, invite me over so I can taste test for you.

Having finally mutually confirmed their love, Do Kyung (Eric Mun) and Hae Young (Seo Hyun Jin) are so happy that they frolic through the streets, hugging each other and kissing. They find a spot to themselves, and Hae Young thanks Do Kyung for pouring out his emotions to her and charging at her wholeheartedly.

The two of them are so happy that I half expect them to be crushed by a meteor or something, but instead, they can’t bear to be parted at the door of Hae Young’s home, and let go of their hands only reluctantly. When Hae Young gets inside, she’s so euphoric that she rolls around on the floor, but by the time her parents get home from the hospital, she’s eating rice. Duk Yi (Kim Mi Kyung), her mother, is frantic with worry, but Hae Young makes up a lame excuse and looks at her like she’s crazy.

Do Kyung’s psychiatrist’s wild theories about predestination have now gone out the window, as he realizes that Do Kyung has changed his fate with love, and may not die in the car accident after all. He whoops it up, and advises Do Kyung to do nothing but looooooove. 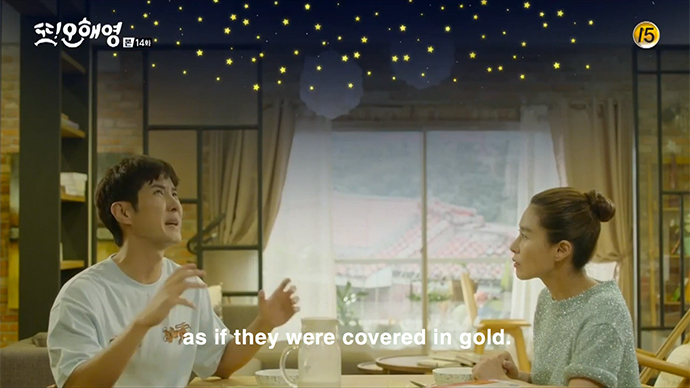 Do Kyung takes his advice to heart, and goes over to Hae Young’s house in the morning, so they can go to work together. Meanwhile, Do Kyung’s sister, Soo Kyung (Ye Ji Won) and stepbrother, Hoon (Heo Jeong Min) are having a glum breakfast when their freeloader, Jin Sang (Kim Ji Seok) bursts in with exciting news of his portentous dream, where the stars form a fish and he catches it. For Soo Kyung, this is the first good sign she’s had since she found out she was pregnant with Jin Sang’s child, but Jin Sang ruins the excitement by being lame again.

As he drives her to work, Jin Sang promises to buy Soo Kyung dinner, then starts asking about the baby’s father again. When Soo Kyung implies that the baby is the result of a one-night stand, Jin Sang is appalled, but when Soo Kyung announces that she’ll be leaving Korea with the child, he won’t hear of it.

When Soo Kyung gets out of the car at work, she says in voiceover that she’ll never tell him that he’s the father, so they can maintain their sibling relationship. Her introspection is interrupted by the arrival of Hae Young in Do Kyung’s car, and the two of them share an awkward elevator ride together. Soo Kyung makes some comment about fickleness, but Hae Young is positive that they won’t break up. As she walks away, Soo Kyung tells Hae Young never to break up with Do Kyung. This comment is overheard by pretty Hae Young (Jeon Hye Bin), who congratulates Hae Young and walks away.

A despondent Hoon sits at the workplace of his girlfriend, An Na (Heo Young Ji) flashing back to his confrontation with film producer, Hee Ran (Ha Shi Eun). He bemoans his fate, to be unsuccessful because he loves An Na too much. An Na rewards him with a sausage.

Meanwhile, Do Kyung has to go on a trip to record a barley field for a movie. This prompts a crisis, since he can’t bear to be parted from Hae Young for even one day. Do Kyung tries to reschedule, then begs Soo Kyung to let Hae Young work outside of the office. When both of these ideas fail, his co-workers kidnap Hae Young from the office on the pretense of being cops investigating a crime. They drag a terrified Hae Young out of the office and into a car, but all is explained when Do Kyung and crew join them. Hae Young happily goes along as Do Kyung records the barley field on a movie shoot, and when they’re done, Hae Young and Do Kyung stay over to spend the night in a field.

Hae Young’s ex-fiancé, Tae Jin (Lee Jae Yoon) goes to visit his friend, and former business partner to ask him what he can do in the company. As his friend goes through a stack of bills, he tells Tae Jin to concentrate on getting Hae Young back before worrying about the company.

Meanwhile, back at Hae Young’s office, Sung Jin (Kwon Min) and the rest of Hae Young’s co-workers try to track down Hae Young at the police station where they think she went, only to discover that she was taken away by fake cops. The situation snowballs as real police are called in, and they inform Duk Yi that Hae Young has been kidnapped.

Meanwhile, Hae Young and Do Kyung are looking at beautiful scenery. Do Kyung tells Hae Young not to fight back if Tae Jin chooses to do anything to him, since he not only ruined his life, but stole Hae Young. The conversation turns to what to call each other. Hae Young wants him to use her name, but Do Kyung is hesitant, worried that she might think that he’s calling out pretty Hae Young’s name. He agrees to call her Hae Young, but in return, Do Kyung asks her to call him “oppa”. That night, they lie down in a barley field, and call each other by their new designations. The mood is romantic as they look up at the stars, but is sadly interrupted by the arrival of the SWAT team, ready to rescue Hae Young from her kidnapper.

It turns out impersonating a cop is illegal, and while Do Kyung’s co-workers get an earful from the police, Hae Young gets an earful from Duk Yi. When they finally arrive back in Seoul, Duk Yi is too exhausted to do anything but tell Do Kyung to just take Hae Young home. That night, as Hae Young sneaks back into her house, her father tells Duk Yi to just let them be, that they won’t be broken up by force.

Dinner with Soo Kyung turns into a nightmare for Jin Sang, when all of his girlfriends show up at the same time to confront him over his cheating ways. Soo Kyung calmly continues to eat her steak, as Jin Sang’s girlfriends prepare to beat him up, but relents in the end and rescues him. Afterwards, she reminds him of what a great kid he was in high school. She wonders what it was that made him change so drastically, and tells him that he should become the Minister of Justice. In voiceover, she adds that she won’t tell him he’s the father of her child, but she still wants him to be a cool and respectable guy. 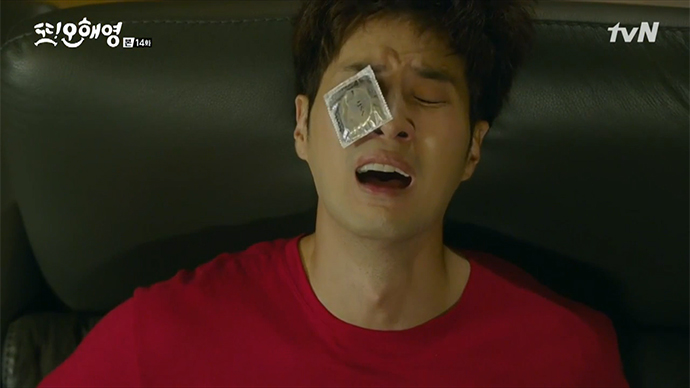 On the way home, Jin Sang stops to buy fried chicken. At home, when Hoon tries to treat Jin Sang like he always has, Soo Kyung beats him up and tells him to treat Jin Sang with respect since he’s older. In the middle of her lecture, Jin Sang finally figures out why she’s being so nice to him, and realizes that he’s the father. When Hoon and Do Kyung realize the same thing, they attack Jin Sang and beat him up. Predictably, this ends with Do Kyung and Jin Sang drinking to the point of getting shit-faced (there’s no nicer way to describe the state they get themselves into), while Soo Kyung cries alone in her room.

The next morning, it’s time for everyone else to cry, too, as Hae Young definitively breaks things off with Tae Jin, and Do Kyung runs into pretty Hae Young on her way to a blind date. In voiceover, Hae Young acknowledges the pain the two of them are feeling, but she cares more about her own love than theirs. That night, Hae Young helps Do Kyung at work, then the two of them go for a walk. In the end, they cuddly while watching a screening of a show by the guy who gave her advice on the radio. She tells Do Kyung that she wants to call in again, to tell them that they’re going out. 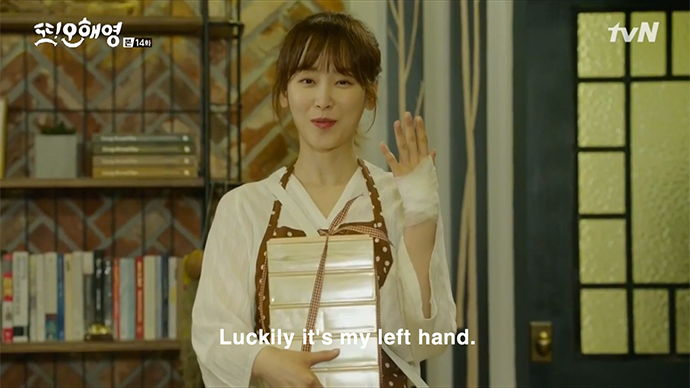 The next morning, one of Do Kyung’s visions comes true, when the son of the owner of his house offers to sell it to him. He ends up cycling through his visions again, and sees one with Hae Young wearing a certain dress (that looks like an apron, for some reason), that she subsequently wears when she brings lunch to his house. Since the introduction of antibiotics, people don’t tend to die of burning their hands, but when Do Kyung sees that Hae Young has burned her hand, he takes it as a bad omen. As she serves him the lunch, Do Kyung has another vision of himself, dying on the road.

Everything that happened with Do Kyung and Hae Young was sweet, but totally predictable this episode, so let’s take a moment to talk about Soo Kyung and Jin Sang instead. Soo Kyung is a great character, strong but vulnerable, ridiculous but relatable, and genuinely, seriously funny. I’m not going to lie; I’m not a huge fan of pregnancy storylines, or of watching characters repeatedly drink themselves into oblivion, but I’m still invested in Soo Kyung. A lot of that is down to great characterization and comedic chops from my new favourite actress Ye Ji Won, and a lot of that is down to the writer and director, who started with a bizarre comedy character and turned her into a complex person with a lot of heart.

Jin Sang, by contrast, is a character who seemed thin from the start, a cheerful slimeball playboy without much of a spine. And yet, he’s the one who forced Soo Kyung to confront the lost love that had tormented her for so long, and strangely enough, he’s been the voice of reason when Do Kyung went back and forth with Hae Young. And, he was the one to cheer them both up when they were dumped (though, granted, in Soo Kyung’s case it resulted in a one-night stand followed by an unplanned pregnancy). Kim Ji Seok’s comedic abilities came as a complete surprise, given that the first and last time I saw him was as a hot but weepy doctor in “Angel Eyes”. It’s refreshing to see a super attractive guy who can bring the laughs without worrying about looking good.

I enjoy the dynamic between these two characters, the sharp but soft-hearted Soo Kyung balancing out the cheerful but loose Jin Sang. However they end up, whether it’s romantic or some version of their sibling relationship, I really want these two to be together; not least because they’re pretty funny.

On a side note, Jin Sang’s face this episode is eminently meme-able. Here are some screencaps to get you started. 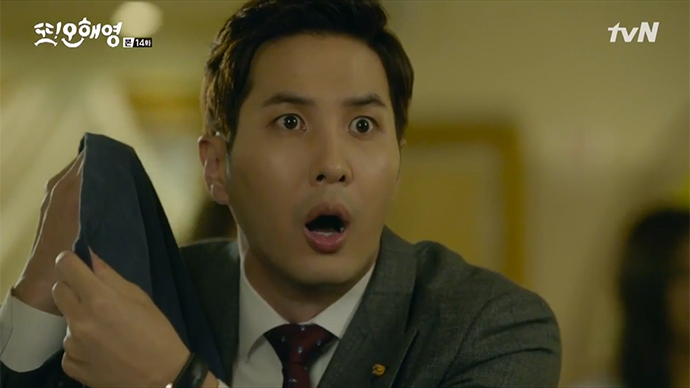 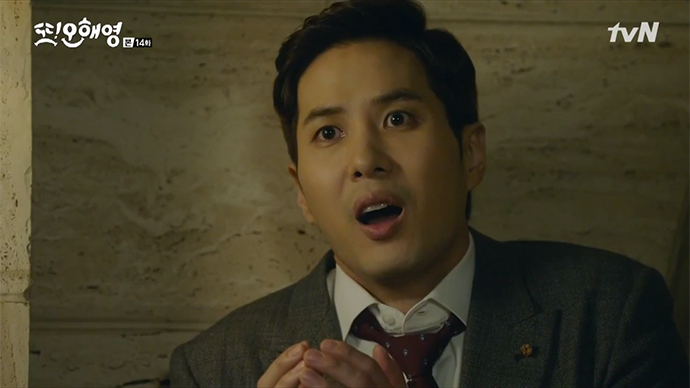