Skip to content
Side dish: This isn’t the recipe that Hae Young uses in this episode, but this recipe for Jumuk Bap from Serious Eats looks pretty good, too.

When the alarm of Do Kyung (Eric Mun) goes off in the morning, he sends a text to his girlfriend, Hae Young (Seo Hyun Jin), telling her that he’ll drive her to work in the morning. Instead of waiting for him to pick her up, Hae Young decides to show up and surprise him, to mixed results. Hae Young ends up apologizing for scaring him, and also for how she was acting the night before. The conversation descends into cuteness as they walk to the car.

Back in the house, a confused Jin Sang (Kim Ji Seok) is shocked to find that he’s not alone in bed. He freaks out, but it’s only Hoon (Heo Jeong Min) teasing him again. When Jin Sang admits that he can’t take Hoon’s teasing, since he already feels backed into a corner with the surprise pregnancy of Soo Kyung (Ye Ji Won), he’s unaware that Soo Kyung is standing right outside the door. She bursts in, kicks Hoon out, and informs Jin Sang that she’s made her mind up, but won’t tell him what she’s decided until he makes up his own.

Do Kyung consults with the psychiatrist again, who tells him to pretend to break up with Hae Young so that her ex-fiancé, Tae Jin (Lee Jae Yoon) won’t kill him. The senior psychiatrist throws his colleague out for his stupid advice, and tells Do Kyung to stay on the path of love rather than fear. Do Kyung takes the senior psychiatrist’s words to heart, and buys Hae Young a bouquet of flowers. When he goes to drop them off at her office, Do Kyung runs into pretty Hae Young (Jeon Hye Bin), who congratulates him on his perfect pairing with the passionate and shameless Hae Young. Do Kyung drops off the flowers on Hae Young’s desk, and sends a text explaining that he would be too embarrassed by her response to stay. Hae Young is so excited by the prospect of receiving flowers that she whacks her knee, much to the amusement of her co-workers.

When Hae Young gets into her parents’ house, she immediately starts making jumuk bap (rice balls), but complains that they’re out of burdock. Wordlessly, Hae Young’s mother, Duk Yi (Kim Mi Kyung) goes out to buy some, and while she’s out, a gloomy Duk Yi wonders if she would be less sad if she wholeheartedly supported Hae Young’s love. 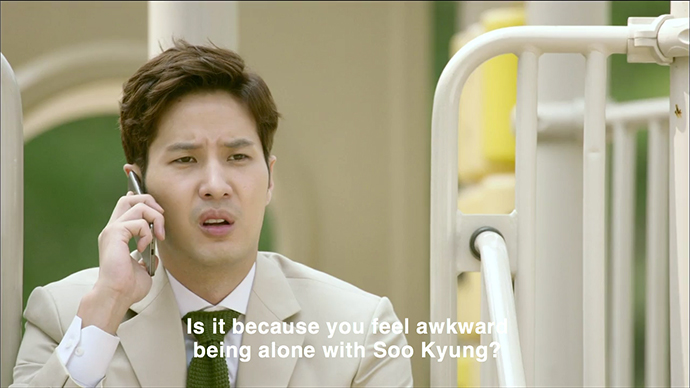 We don’t get the answer, because Hae Young takes off with a packed dosirak for an outing with Do Kyung. On their way, Do Kyung gets a call from a glum Jin Sang, asking when he’ll come home. Do Kyung is busy with Hae Young, so Jin Sang tries Hoon next, but he’s unsympathetic and busy recording movie sounds with his girlfriend, An Na (Heo Young Ji). After leaving the studio, Hoon and An Na run into sexy film producer, Hee Ran (Ha Shi Eun), and An Na sasses her.

Jin Sang smokes on a street corner, with a couple of melons for Soo Kyung sitting at his feet. Soo Kyung watches him silently and flashes back to their younger days, when she caught Jin Sang smoking a cigarette to steel his nerves about being drafted after failing the bar exam. Back then, Jin Sang passed out from inhaling too deeply, but this time around, he manages fine while a sad Soo Kyung walks away. 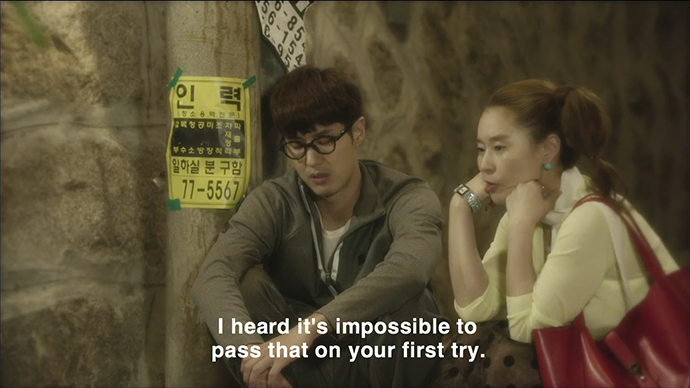 Meanwhile, a drunken Tae Jin complains about his unsatisfying revenge to his business partner. His business partner urges him to forget about it, pointing out that ruining someone’s life won’t feel good, but Tae Jin is too set on his course of action to waver.

Do Kyung, on the other hand, is enjoying his evening with Hae Young. Though he’s briefly interrupted by a text from Tae Jin, threatening trouble the next day, the couple talk about what made Hae Young fall in love with Do Kyung. It turns out that Hae Young fell in love at first sight, because he looked so unhappy, and she wanted to make him happy. As they hug, she wishes that Do Kyung would get old so that no one would find him attractive, and he wishes that she would get fat, so no one would find her attractive. This conversation is slightly bizarre, but whatever; people in love do talk a lot of nonsense to each other. 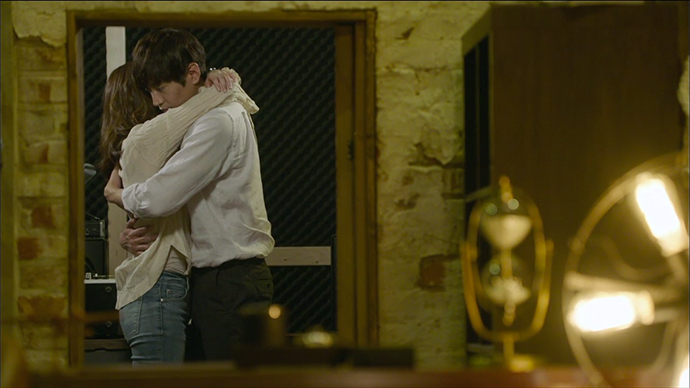 Their mutual happiness is short-lived, sadly, because the next day, Do Kyung’s studio is repossessed. As Hoon and Do Kyung’s co-workers wonder what happened, Do Kyung tries to find jobs for them all. But, all is explained when Do Kyung’s mother, Ji Ya (Nam Gi Ae) comes in, looking stricken. When Hoon accuses her of causing the catastrophe, Ji Ya goes running to her loan shark, only to discover that her debt has been sold to Tae Jin. The loan shark tells her that the whole story was on the radio, that Do Kyung had taken revenge on Tae Jin over a woman named Oh Hae Young.

Jin Sang comes to the studio, and urges Do Kyung to fight back, but Do Kyung has no will to. Not only does he believe that it’s right for Tae Jin to ruin his life, but he also knows that Jin Sang is no match for the combined power of Tae Jin and Chairman Jang. 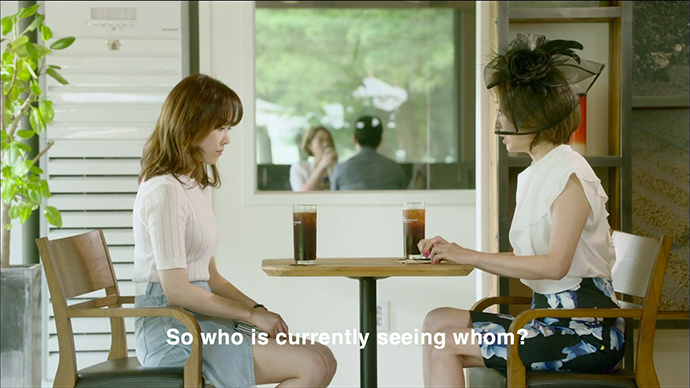 They end up in a café, where a confused Ji Ya uses a diagram on a napkin to try to figure out everyone’s relationship. Finally, she demands that Hae Young dump Do Kyung and go back to Tae Jin. As Ji Ya leaves, she runs into pretty Hae Young. Things are immediately hostile between them, as Ji Ya points out that the situation is no longer pretty Hae Young’s business, and pretty Hae Young replies that Do Kyung is the kindest person on earth not to have abandoned his evil mother.

Meanwhile, Do Kyung, Hoon and their co-workers go out for drinks. Everyone is puzzled by Do Kyung’s attitude, but when he informs them that he’s found jobs for the rest of them, they tell Do Kyung that they would rather work with him. The conversation lightens up and Do Kyung even manages to crack a smile, just in time for Tae Jin to see him looking happy. Angry at Do Kyung’s good humour, Tae Jin gets out of his car and walks into the bar, but instead of starting a fight, he pays for their drinks and then leaves. Rather than respond, Do Kyung calls Hae Young, offering to pick her up since she’s working late.

Jin Sang finally works up the courage to return home, only to be met by a resolved Soo Kyung. Soo Kyung points out that since the two of them have not slept together since the first time, that they probably can’t be a couple. Jin Sang looks stricken, but does little more than clench his fists as Soo Kyung asks him to leave the house. They walk out with all of Jin Sang’s stuff packed, and Soo Kyung tells Jin Sang that she releases him of all his responsibility towards her and the child. When she tries to push him along, Jin Sang balks at first, but eventually starts walking. Soo Kyung calls out a march for him as he goes, but he only makes it around the corner before he breaks down crying.

Rather than being at work, Hae Young is at Tae Jin’s hotel room for a talk. She tells him that their breakup destroyed her, and the only thing that kept her going was Do Kyung. She points out that Tae Jin never loved her, or he wouldn’t have put her through what he did in the name of protecting her. Tae Jin angrily asks why she came, and she tells him that it’s okay to make Do Kyung penniless and destroy him, but that hitting him breaks her heart. Tae Jin is destroyed as she leaves the hotel room and walks away. 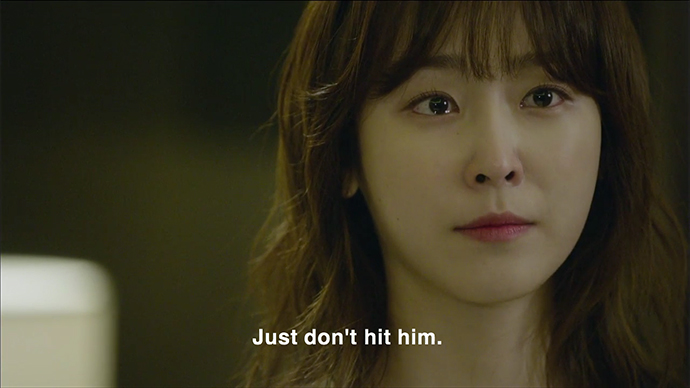 Meanwhile, Do Kyung leaves his drinking party to go pick up Hae Young from work, and waits in front of her building. Hae Young sneaks in to the back of the building, then comes out the front to meet Do Kyung. As they walk home, to Hae Young’s surprise, Do Kyung tells her he loves her. In voiceover, Hae Young celebrates their happy ending, while Do Kyung begs to be happy a little longer.

It may be a little too late to say this, but weren’t we watching a contemporary romantic comedy? It was melodramatic enough with Do Kyung and Hae Young’s tears, breakups, and desperation, but when did this bizarre revenge plot take over? Why is everyone acting like revenge is totally normal? Can Do Kyung find no other way to make amends? Why is Hae Young telling Tae Jin not to hit Do Kyung, but acting like ruining his life otherwise is fine? I feel like I’ve lost the plot somewhere, and I don’t know where to pick it up anymore. I mean, yes, I should have seen this coming from the premise, but I guess I was fooled by the marketing.

Let’s look at the positive side: at least Hae Young didn’t decide to go with the noble idiocy option and dump Do Kyung in order to protect him. Here’s hoping Do Kyung can do the same at some point and open up about his impending doom. Who knows? Maybe that will save him in the end.

Moving on from these three, I’m not sure why Soo Kyung is insisting on treating the adult Jin Sang like a kid who has to be protected from the consequences of his actions, but I’m surprised that Jin Sang is going along with it. At the very least, shouldn’t Jin Sang pay child support? Is there no other co-parenting arrangement that they can come to?

Since we have two episodes left, I’m going to be optimistic and assume that all my questions are going to be addressed next week. You can do it, writers!