Side dish: This episode could have used more fun. How about a Funfetti Cake? A rainbow-speckled cake is great for birthdays or just when you’re feeling down.

It’s awkward all around as Hye Ji (Son Na Eun) announces an interest in Ji Woon (Jung Il Woo). Hyun Min (Ahn Jae Hyun) swallows hard and retreats to his bedroom, slamming the door behind him. Hye Ji tells Ji Woon to think it over and stumbles away. Ha Won (Park So Dam) witnesses everything then intercepts Ji Woon to return his watch to him, and tries to congratulate him while looking devastated.

Ji Woon thinks back to when he first met Hye Ji and found her crying in the gardens of Sky House. After Hye Ji confronted Ji Woon about accidentally taking her photo, Ji Woon let her cry in his personal work space. As he stood outside to give hr some privacy, Ji Woon thought back to his younger days when he helplessly watched his mother cry.

Ha Won weighs the possibility of Ji Woon and Hye Ji dating with her friend, Ja Young (Cho Hye Jung), and by consulting netizens. That’s where she gets the idea to test Ji Woon’s feelings for her by throwing a book at his head, spilling juice on him, and messing up his personal space. Ji Woon blows his stack, and Ha Won concludes that he does not like her.

It appears that Hye Ji’s ploy to make Hyun Min jealous is a success when he stalks Hye Ji then approaches her, asking to talk. Hye Ji denies that she is dating Ji Woon simply to get at Hyun Min. Ji Woon suddenly shows up and ends the conversation. Once they are alone, Ji Woon asks Hye Ji if she honestly wants to date him, and Hye Ji claims that she is being genuine. 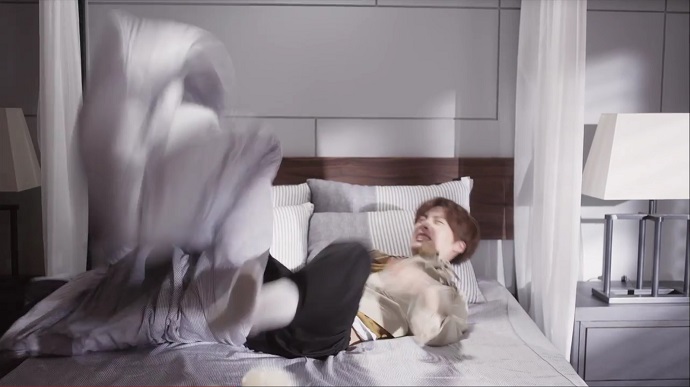 Hyun Min decides to take his anger out on Ji Woon’s model car, and Ha Won witnesses his petty vandalism. She reprimands him and correctly guesses that he is having a tantrum about Hye Ji dating Ji Woon. Hyun Min denies caring then cows Ha Won by pointing out that she was seeking out Ji Woon.

Ha Won is sulking about Ji Woon when pop star, Seo Woo (Lee Jung Shin) asks if she wants to do something with him since he has only one interview on his schedule. Ha Won turns him down, but asks if men like pretty girls like Hye Ji. Seo Woo insists that he prefers Ha Won, and she cheerfully misinterprets his confession as flattery.

Meanwhile, Ha Won’s stepmother and stepsister continue to scheme to get the latter married to one of the Chairman’s grandsons. The stepmother has been buttering up the Chairman’s wife, Madame Ji, and the stepdaughter proposes that the stepmother make herself indispensable by informing Madame Ji of all the nasty gossip about her, including the rumour that she was previously married.

At a Haneul Group construction site, Ha Won’s possible biological father, Kang Young Jin gets wind of how rich the Chairman is. The idea of hunting Ha Won down for funds becomes attractive enough for him to skulk around Sky House.

Secretary Yoon Sung (Choi Min) is asked by the Chairman to take care of Madame Ji the next day. Yoon Sung looks uncomfortable as he agrees to the request while Madame Ji gives him meaningful looks.

Poor Seo Woo busies himself with preparing a gift for Ha Won: a coaster that reveals a message while under a hot drink. This is disrupted by the sudden appearance of Ha Won herself. She finds Seo Woo’s new album, and suddenly remembers that his new single is being released tomorrow. Ha Won asks him for a live preview, but becomes so uncomfortable by how Seo Woo directs the confessionary song at her that she interrupts him to escape.

Ji Woon is haunted by Hye Ji’s insistence that she truly wants to date him, as well as by Ha Won’s accusation that he alone failed to show any concern after her accident. He brings a bag of baked goods back to Sky House for Ha Won, but runs into Hyun Min who attempts to pick a fight. Ji Woon riles him up before suggesting he try harder to hold on to Hye Ji. Hyun Min goes to drown his sorrows at a bar, bemoaning Hye Ji’s abandonment while a gold digger insists he is the only man for her.

Ji Woon presents Ha Won with the baked goods and she is delighted. She is so busy savouring Ji Woon’s gift that she completely misses the message on the coaster that Seo Woo gifted her. Fortunately, Seo Woo appears resigned to getting over her, crossing out Ha Won’s name from the sheet of lyrics he wrote for her. 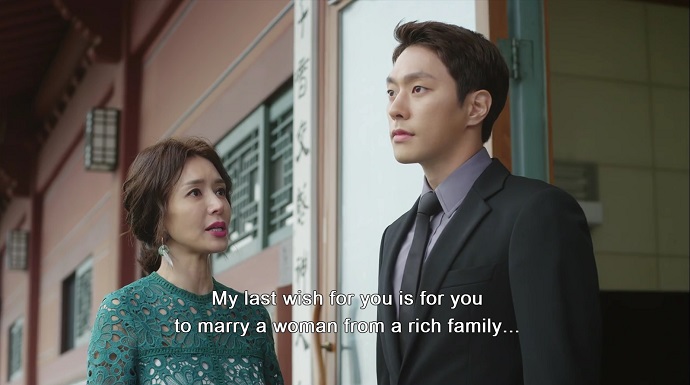 The next day, Yoon Sung is horrified to discover that Madame Ji requested his escort in order to get him to a marriage meeting. He immediately leaves, and Madame Ji chases after him to explain that her only wish is to see him marry well. This is when it is revealed that Madame Ji is Yoon Sung’s estranged mother, and she claims to have married the Chairman for his sake. In keeping with the agreement they made when they reunited after a 12-year separation, Yoon Sung decides to pretend that he and Madame Ji are unrelated, and storms away.

For lack of another option, Ha Won asks Ji Woon to take her to the hospital for her checkup. Despite her puppy dog eyes and the conspicuous display of her injured foot, Ji Woon closes the door in Ha Won’s face. Yet, Ji Woon shows up with his car when she comes out of Sky House, then huffily opens the car door for her when she protests. Hence, when the doctor announces that she is fully recovered, Ha Won is crestfallen while Ji Woon smirks with satisfaction. 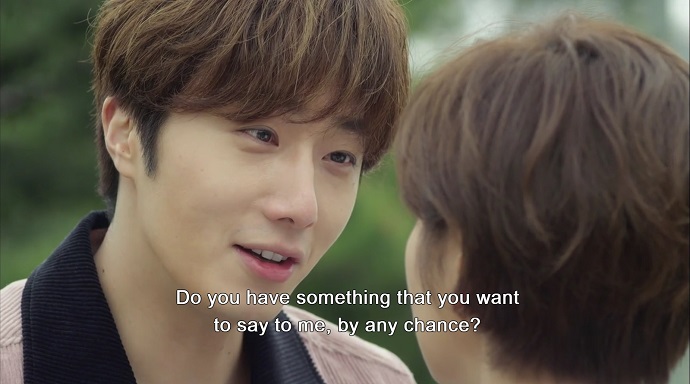 Ji Woon teases Ha Won about being such a burden, and takes it too far for her. Ha Won runs off in anger, but is chagrined to realize that she left her purse in his car. Ji Woon ends up driving up alongside her and manages to coax her back in the car. They go for a drive and end with a scenic view. Ha Won musters the courage to ask Ji Woon if he likes someone.

Hyun Min is playing angry billiards with his friends when Hye Ji attempts to reach him by phone. He chooses to ignore the call then later, regrets it after finding out that Hye Ji’s family business has gone bankrupt. Hye Ji’s family home and its contents are being auctioned off while her father has been arrested. 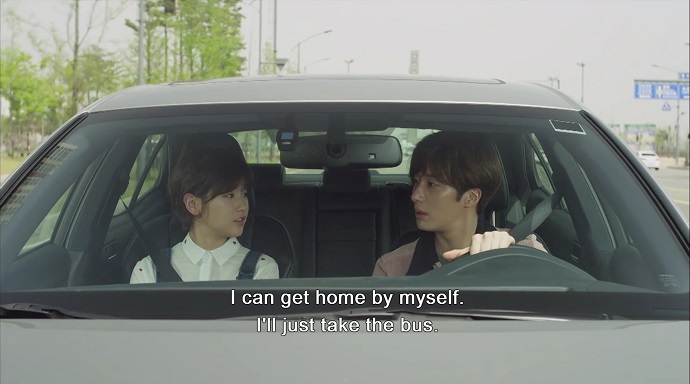 Hye Ji decides to call Ji Woon next, thus preventing him from answering Ha Won’s question about who he likes. When Ji Woon announces to Ha Won that they must leave immediately, she correctly guesses that he is taking off to meet Hye Ji without knowing the reason why. Ha Won asks to be let out of the car so he can drive directly to Hye Ji. This allows Ha Won to cry freely on public transit.

When Ji Woon arrives, Hye Ji cries in his arms, though Ji Woon hesitates before holding her. He takes her back to Sky House and drives up just as a guilt-ridden Hyun Min is running out to find Hye Ji, and Ha Won finally arrives home. Ji Woon announces to everyone that Hye Ji will be living at Sky House for the time being.

This episode exhausted me with the games the lead foursome are playing instead of communicating honestly or having some self respect.

As much as I enjoy watching Ha Won and Ji Woon together, I found her attempts to test his feelings for her contrived and placed them both in a negative light. Though, at least, Ha Won knows that she likes Ji Woon and she found the courage to ask him who he is attracted to. Ji Woon cannot even admit to himself that he has feelings for Ha Won, which is why he has allowed Hye Ji to drag him into a sham relationship.

Hye Ji’s exploitation of Ji Woon to get back at Hyun Min is unconscionable. Not only is she blocking Ji Woon from pursuing a real relationship, but she cannot even admit to Ji Woon that she is clearly still hung up on Hyun Min. This character has gone from boring to despicable, and I found myself annoyed with her when she called Ji Woon during a legitimate family crisis. I wondered why Hye Ji does not have any other friends before realizing that she is too busy creeping on Hyun Min to make any.

Hyun Min has been the most disappointing in this episode as he has played right into Hye Ji’s cheap attempt to make him jealous. He sank to her level by stalking her then playing hard to get when she attempted to reach him. In short, he was no fun, which is the biggest crime of all.

Meanwhile, Seo Woo is on the periphery, working hard to catch Ha Won’s eye with romantic gestures. It’s almost comical the way Seo Woo seems to be acting in a vacuum, because he is almost universally ignored. Not even the showcase of him posing for photographs during his interview could make him relevant.

Not having come from a Korean background, I don’t understand why it would be considered controversial for the Chairman’s wife to have been previously married. She is a woman of a certain age; did they expect her to be a virgin or remain single? Plus, the Chairman has been married four previous times. Talk about a double standard.

I have a lot of complaints about this episode, but I have to admit that Jung Il Woo still continued to turn on the charm sufficiently that I found the show highly watchable. He actually managed to make his character’s more obnoxious moments appealing, which is quite the feat given how mean Ji Woon was to Ha Won at times. Keep up the good work, Jung Il Woo. I need something to look forward to next week. 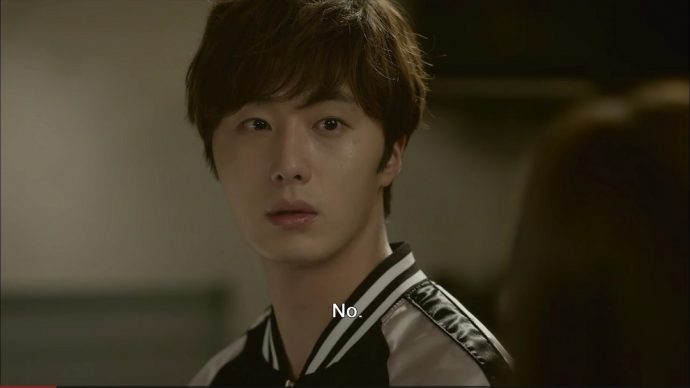