Side dish: Min Hyuk looked heartbroken as he watched Bong Soon’s family consume a whole bowl of bibimbap while he fasted. Maybe Bong Ki would have let him eat it if it was cauliflower rice? Here’s a recipe for making cauliflower rice from the Minimalist Baker, and a recipe for bibimbap from Judy Joo.

Strong woman, Do Bong Soon (Park Bo Young) defeats a room full of gangsters, but before she can confront their boss, Baek Tak, she’s saved from being stabbed by gaming company CEO Ahn Min Hyuk (Park Hyung Sik), who heroically jumps in front of the knife. In the hospital, Min Hyuk takes advantage of Bong Soon’s guilt over his wound to trick her into taking care of him.

Meanwhile, police detective, In Gook Doo (Ji Soo), who witnessed the whole thing, thinks back to high school and finally figures out that Bong Soon has been super strong all along.

The kidnapped women try to escape by yelling loudly, succeeding only in pissing off the kidnapper who attacks one of them in retaliation. Meanwhile, Gook Doo puts together some clues and goes to the junkyard where the kidnapper is holding the women.

Gook Doo recognizes the owner of the junkyard as the fiancé of the first victim, and puts together that he’s probably the culprit. Unfortunately, the police are unable to prevent another woman being kidnapped.

Back at the hospital, thanks to overhearing a visit from Min Hyuk’s father, Bong Soon learns the truth about Min Hyuk’s anger over his lonely childhood. After his father leaves, Bong Soon cheers him up, but her efforts to feed him a home-cooked meal fall flat when her doctor brother, Bong Ki points out that he’s not allowed to eat. Min Hyuk watches as Bong Soon’s family eats his meal instead. After Bong Soon’s family leaves, Bong Soon washes Min Hyuk’s hair and they almost kiss, but Min Hyuk stops short. Instead, they gaze in wonder at each other as they sleep.

The next day, Gook Doo asks Bong Soon to listen to the voice of the fiancé of the first victim, and she positively identifies him as the culprit. But, it’s too late, as someone else is arrested for the crime.

Junggugeo Kaenada 중국어 캐나다: This was an action-packed episode. Did you enjoy it?

Only 만: I did. There was a lot going on, but it seemed like it all came together in this episode. We had the fight between Baek Tak’s underlings and Bong Soon, we had the police doing police work for a change, and we even had all the emotional beats covered with Bong Soon and Min Hyuk getting closer together, with an increasingly jealous Gook Doo looking on.

Junggugeo Kaenada: Lots of incredible highs and lows. Let’s start with what we liked. I really enjoyed watching Bong Soon kick ass at the beginning of this episode. Though, I had the nagging thought that her training with Min Hyuk didn’t cover martial arts.

Only: Even if it did, I don’t think a couple of days’ worth of training would turn someone into an expert. That said, I guess if we buy the fact that she’s super strong, we’ll have to swallow this as well. I enjoyed Gook Doo’s belated realization that Bong Soon had been super strong all along. He really has no idea what to do with that information. 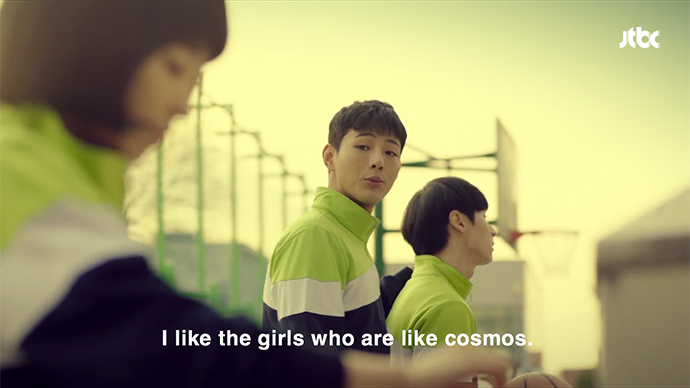 Junggugeo Kaenada: As an aside, Ji Soo made a convincing teenager in the flashbacks. I have to say, I’m disappointed we don’t get to see more of dopey teenage Gook Doo.

I’m impressed that in spite of his confusion about Bong Soon’s powers and his feelings for her, Gook Doo’s head is still on the job. He came ever so close to discovering where the women are being imprisoned.

Only: That was impressive. Even at the end, when Gook Doo goes to Min Hyuk’s hospital room to ask Bong Soon to ID the kidnapper’s voice, he’s clearly jealous of Min Hyuk, but he still gets the job done. Competent police work for the win! 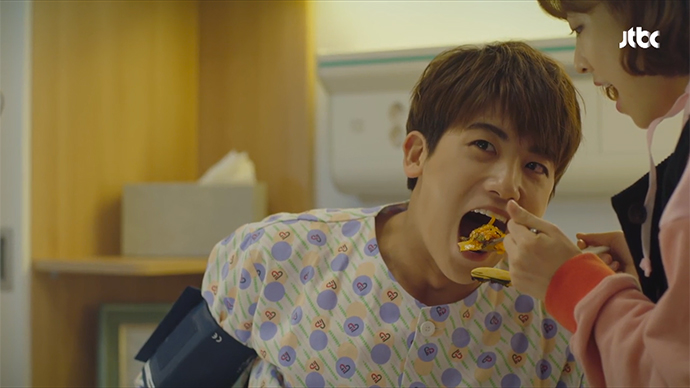 Junggugeo Kaenada: Min Hyuk valiantly put himself between the knife and Bong Soon, but he was pretty useless otherwise in this episode. Thank goodness his hospital stay gave us some great comedy. The look on starving Min Hyuk’s face while Bong Soon and family gorged themselves on homemade food in front of him was priceless. I could sympathize.

Only: My family would totally do that, with the exact same expressions of pity as they stuffed their faces. On the other hand, Min Hyuk did sucker Bong Soon into taking care of him, to the point of washing his hair. Though, that did give us a pretty intense moment right after.

Junggugeo Kaenada: Min Hyuk went from pitiful to heartthrob pretty quickly. I can’t blame Bong Soon for closing her eyes in expectation of a kiss when faced with that longing stare. Though, I couldn’t help but think, “He’s still her boss.” I don’t think I’m ready for them to take their relationship to the next level, no matter how tempting the idea is.

Only: I was caught off guard when he stopped short of kissing her, but I’d agree that they don’t seem like equals. And, we’ve had no real indication that she has feelings for him yet, which might be why he stopped when he did.

Junggugeo Kaenada: If it wasn’t for his comedic and intense scenes with Bong Soon, I would have been annoyed with Min Hyuk. He went through the trouble of training Bong Soon to become a hero, then he tried to hold her back from doing what she was born to do. Min Hyuk looked especially silly in his silk pyjamas while Gook Doo was trying to enlist Bong Soon’s assistance in catching the kidnapper.

Only: I’m glad she ignored him. However protective Min Hyuk feels, it was ridiculous on his part to tell her to stay out of catching the Dobong-dong kidnapper, especially after he attacked her friend, Kyung Shim.

Junggugeo Kaenada: The most thrilling development regarding the Dobong-dong kidnapper in this episode is that he has placed Hee Ji in his crosshairs. I’m pretty sure the claim at the end of this episode that the kidnapper had been caught is a red herring.

Only: Given how much the kidnapper has been manipulating things up till now, it’s definitely a red herring.

Junggugeo Kaenada: Otherwise, I am pretty impatient to have the kidnapper get caught. I did not enjoy watching him assault one of his victims with a twisted piece of metal, and that made the way Gook Doo’s team struggled to keep up with him all the more painful.

Only: This is one of the first episodes where they seemed like they were getting somewhere. Unfortunately, then I remembered that the kidnapper had the entire squad room bugged, and knew what they were doing all along. On the upside, at least they have the right guy in their sights now.

Junggugeo Kaenada: Between the kidnapper and Bong Soon’s mother, it occurred to me that this show is actually pretty violent. Whether it’s the kidnapping victims or Bong Soon’s father or Baek Tak’s men, someone at a severe disadvantage is constantly getting beaten. The show frequently plays these scenes for dramatic effect or laughs, but I’m not entertained by them.

Only: Agreed. I don’t necessarily want to watch a woman get beaten with a piece of metal, or look at a bunch of injured thugs in a romantic comedy. It’s probably not the first or the last time I say this, but I really wish Bong Soon’s nemesis had been a bank robber instead of a kidnapper and a gang of comedy thugs.

Junggugeo Kaenada: Well, let’s hope the police make some serious headway in episode 10. Plus, now that Baek Tak has conceded defeat, and Bong Soon’s mother has given her away to Min Hyuk, maybe everyone can live peacefully with each other for one episode.