Side dish: Bong Soon never became famous before she became weak. Perhaps, she will find comfort in munching on Almost-Famous Soft Pretzels.

Cop, Gook Doo (Ji Soo) manages to injure Jang Hyun before the kidnapper drives away. Gook Doo gives chase before Jang Hyun’s car goes flying off a cliff and into the water. Later, the cops are unable to find Jang Hyun’s body. 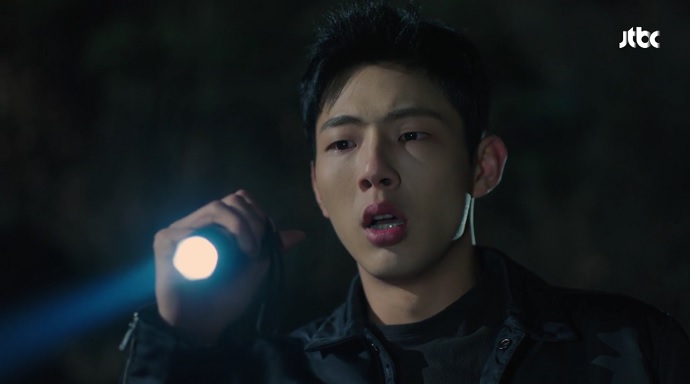 Bong Soon (Park Bo Young) is taken by Min Hyuk (Park Hyung Sik) back to his house to rest, with the permission of Bong Soon’s father. Min Hyuk expresses his fear that Bong Soon does not return his feelings, and she tearfully expresses her love for him.

The next day, Kyung Shim insists on being discharged from the hospital to go home to Busan. Before departing Seoul, she has a tearful reunion with Bong Soon and her family. Kyung Shim reveals to Bong Soon’s family that Bong Soon has lost her powers. Later, speaking from personal experience of having lost her extraordinary strength, Bong Soon’s mother encourages her to carry on with life, and it will eventually get easier to live as a normal person.

Bong Soon struggles with being ordinary, no longer able to use her immense strength to help others. Min Hyuk can only watch sadly and reassure her that he loves her regardless. On the plus side, Bong Soon and Min Hyuk get to date like a normal couple, kissing on the street and going on picnics.

In other news, Baek Tak and his gangsters may be back to the pursuit of money, but they agree to go to a jjimjilbang with the Buddhist monk. They begin to suspect that he is not from India. Bong Soon’s parents bicker over the father’s support of the mother’s rival, Gook Du’s mother. 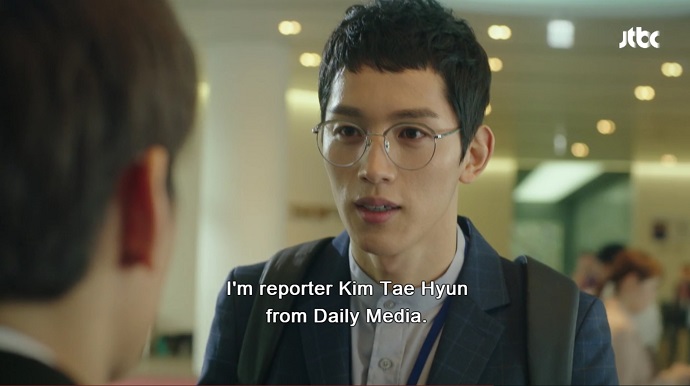 The cops are ready to close the Dobong-dong kidnapper case, not knowing that Jang Hyun escaped death. Disguised as a reporter, Jang Hyun infiltrates Min Hyuk’s office building, but is recognized by Gook Du in the lobby. Jang Hyun manages to escape, and after announcing over the PA system that he has a bomb, he kidnaps Bong Soon.

By the time Min Hyuk finds Bong Soon, she is tied up with a bomb strapped to her and trapped behind doors chained shut. Bong Soon begs Min Hyuk to escape, but he refuses to leave. With mere seconds to live, Bong Soon sobs desperately about her desire to save herself and Min Hyuk. Her powers are magically restored, and she manages to break free and hurl the bomb off the building just as it explodes. Bong Soon and Min Hyuk embrace in relief. 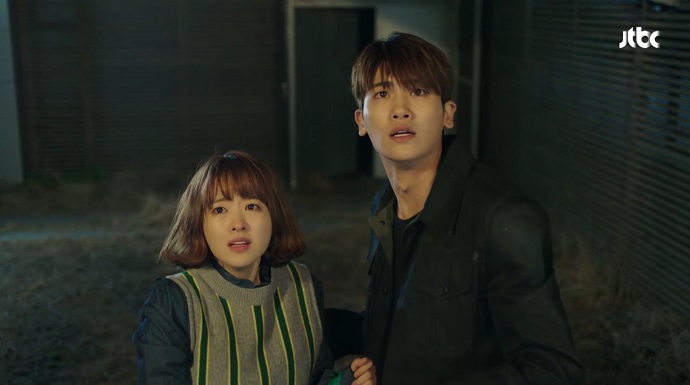 Only is away this week, so we’ve drafted in occasional Noona, Jin Joo (진주) to step in.

Junggugeo Kaenada 중국어 캐나다: What a fantastic episode! There were heart felt moments, thrilling action, and the plot did not drag.

Jin Joo 진주: The writer really didn’t waste time letting Bong Soon mourn the loss of her power. Not that she did much moping, thanks to lots of loving from Min Hyuk. But, I did not expect Jang Hyun to make such a quick return. 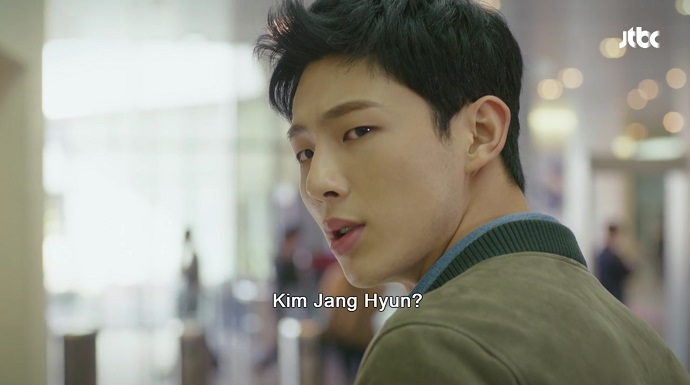 Junggugeo Kaenada: For once, I was excited to see that psychopath, and relieved that his disguise failed instantly thanks to Gook Du. Good work, Gook Du! Thus, rather than experience the frustration of watching Jang Hyun stalking unsuspecting victims, we got an intense hunt for him by Gook Du and Min Hyuk. This is the kind of dynamic that this show should have had for the last 13 episodes.

Jin Joo: I agree; I would rather have watched the protagonists cooperating in actively hunting Jang Hyun down than have them be constantly distracted while Jang Hyun played mind games and tortured women. Well, at least, we finally got what we wanted in episode 13. 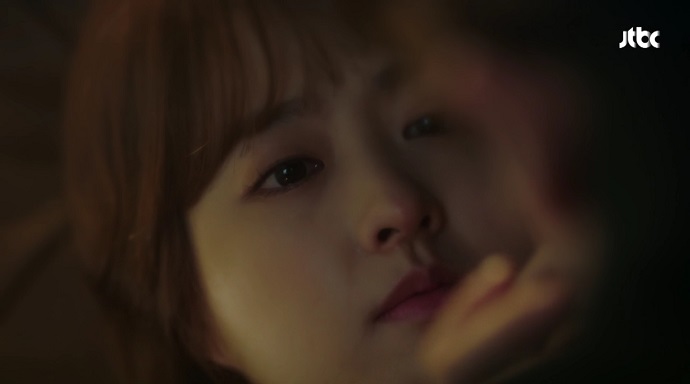 Junggugeo Kaenada: Speaking of getting what we wanted, we also got lots of lovey dovey scenes with Bong Soon and Min Hyuk. However, the first one in this episode really cemented their relationship for me; the moment Bong Soon regained consciousness on Min Hyuk’s couch and the couple tearfully expressed their love for each other was heartrendingly tender.

Jin Joo: I may have shed a tear or two during that moment in solidarity with the couple. 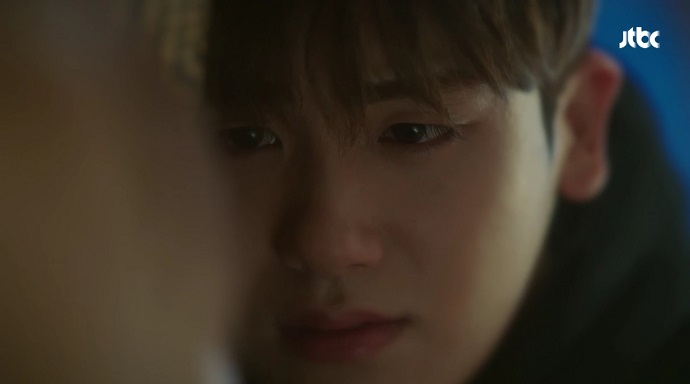 Junggugeo Kaenada: I really appreciated the balance they struck with Bong Soon where she is understandably upset about losing her powers, but not incapable of pulling herself together and enjoying her relationship with Min Hyuk.

Jin Joo: Min Hyuk got back in my good books by being so quietly supportive of Bong Soon. Kudos to Park Hyung Sik for conveying sympathy without being overbearing.

Junggugeo Kaenada: Of course, it was highly likely that Jang Hyun would eventually reappear given that his dead body had failed to turn up. However, I could fully enjoy Bong Soon and Min Hyuk together, because there was nothing they could do but focus on each other until Jang Hyun showed his face.

Jin Joo: Yes, the viewers could enjoy the reprieve along with the couple, because we did not possess some terrible knowledge that the couple did not. Thank you, writer! I appreciated seeing Bong Soon and Min Hyuk eating chocolate or picnic lunches when in love – basically stuffing their faces all the time. 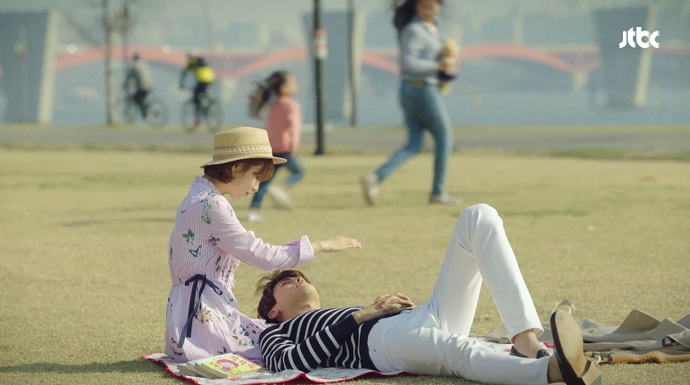 Junggugeo Kaenada: I also noticed that Bong Soon and Min Hyuk seems to be back to more equal footing, even though Bong Soon has lost her power. This was especially apparent in the scene where Bong Soon tricks Min Hyuk into revealing that they are the same age.

Jin Joo: Well, it helps that Bong Soon no longer seems in awe of Min Hyuk as she was when she first started falling for him. Plus, he has become a super supportive boyfriend to compensate for her loss. 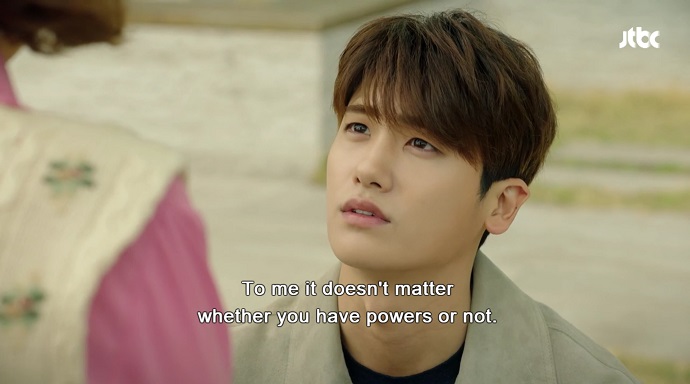 Junggugeo Kaenada: In a final twist, Bong Soon has regained her powers, and saved herself and Min Hyuk. It appears that the show will give us the final showdown between her and the villain that I always hoped for. Bong Soon is now a seasoned hero who does not take her powers for granted, and Min Hyuk will fully support her, knowing how much her powers mean to her.

Jin Joo: With those prospects in mind, I am really looking forward to the final two episodes.