After an emotional reunion, chef Sun Woo (Jo Jung Seok) tries to piece apart his previous experiences with timid Bong Sun (Park Bo Young) from his moments with the ghost who possessed her, Soon Ae (Kim Seul Gi). Many of the livelier moments and the sexual harrassment were with Soon Ae, though Bong Sun is the one responsible for his favourite food blog and she did capture the bike seat thief with her teeth. Sun Woo confesses that he fell for Soon Ae’s vibrant personality. After Bong Sun mentions a passing ghost, Sun Woo resolves never to let go of her hand.

Meanwhile, at the police station, Sung Jae notices that the lock on his desk has been tampered with. He checks the contents, but finds that Soon Ae’s diary is still inside.

When Sun Woo gets home, he calls Bong Sun to check that she turned on her cell phone as he had asked. Bong Sun asks if he relies on Sung Jae, and Sun Woo confirms that he does, because Sung Jae is family. Bong Sun passes out during the phone call, to Sun Woo’s amusement.

At Sun Restaurant, sous chef, Min Soo (Kang Ki Young) broaches the topic of finding a replacement for Bong Sun. Cordon Bleu trained chef, Joon (Kwak Si Yang) and the other chefs still want Bong Sun back, so they resolve to just hire an additional assistant chef and keep Bong Sun’s position open. Min Soo and chefs treat the job interviewees like prospective girlfriends, and end up hiring someone who is quickly fired by Sun Woo.

Soon Ae returns to the police station in the body of female cop, Officer Kang, but finds her diary missing from Sung Jae’s desk. However, the noose is tightening on Sung Jae as Officer Han receives the results of a fingerprint ID test, which prove that it was Sung Jae who destroyed the hard drive that revealed the identity of the hit-and-run driver. 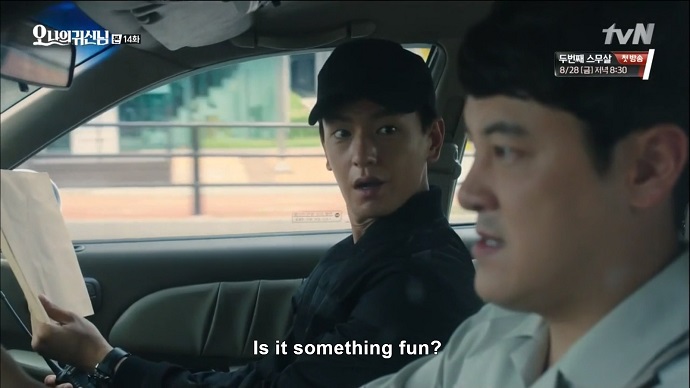 Officer Han secretly arranges to meet up with Sun Woo, but Sung Jae finds him first. Officer Han and his patrol car end up at the bottom of a ravine, and the fingerprint ID test is turned to ashes. At Officer Han’s funeral, Sun Woo remembers Officer Han’s warning, and chooses not to reveal their arranged rendezvous to Sung Jae. In the washroom of the funeral home, Sun Woo is disturbed to witness Sung Jae happily whistling to himself.

After learning of Officer Han’s untimely demise, Soon Ae and Bong Sun decide that it is time to speak with Sun Woo. The women share their suspicions about Sung Jae’s involvement in Officer Han’s death, Eun Hee’s hit-and-run, and Soon Ae’s death. They ask Sun Woo to help find Soon Ae’s diary. Sun Woo is in shock that the man who has made his sister so happy is so evil. Alone with Sun Woo, Bong Sun tries to comfort him with the exercise of inner peace and a hug.

Sun Woo stops by his mother’s home while Sung Jae is out, and begins the search for Soon Ae’s diary. He manages to find Sung Jae’s secret stash and the diary inside it just before his brother-in-law returns unexpectedly.

Bong Sun thanks Soon Ae’s father, Myeong Ho (Lee Dae Yeon) for allowing her to stay. Myeong Ho admits to enjoying having her around, because she reminds him of his daughter. Bong Sun carefully asks why Soon Ae would have committed suicide, and Myeong Ho can only express regret at not answering Soon Ae’s final phone call. He continues to retain her final voicemail, which only contains inexplicable sounds.

Sun Woo meets up with Soon Ae and Bong Sun at the apartment of shaman, Suhbingo (Lee Jung Eun) where Soon Ae possesses the shaman’s body to allow for ease of communication. They review Soon Ae’s diary where they find a four digit number, and listen to her final voicemail. They make out seven digits, and Bong Sun guesses that the numbers could be a license plate.

Sun Woo returns to his restaurant to find PD So Hyeong (Park Jung Ah) there. He tells So Hyeong that he must pull out of her cooking competition show, but cannot explain why.

Soon Ae possesses the female cop, Officer Kang, and is able to use the police database to confirm that the numbers match the license plate belonging to Sung Jae. She is overheard talking about Sung Jae with Bong Sun by the creepy cop himself, who demands to know the reason for her interest in him. As he grabs her by the throat, his phone rings and the ringtone prompts a flood of memories for Soon Ae. Soon Ae witnessed Sung Jae’s hit-and-run of Eun Hee, before Sung Jae killed her. As Officer Kang passes out, Soon Ae exits her body, and comes face-to-face with a leering Sung Jae.

Sung Jae has becomes a terrifying character. Every time he fixed his gaze on Officer Han or Sun Woo or Soon Ae, I wondered why they didn’t just run away screaming – to hell with any attempt to act normal.

Given the situation, it makes sense for Soon Ae to push personal feelings aside and focus on targeting Sung Jae. However, I must give the writers kudos for allowing Soon Ae to do what makes sense rather than create drama by having her act like a jilted lover. She is obviously hurt by seeing Bong Sun and Sun Woo together, but knows that she has no say in the matter. 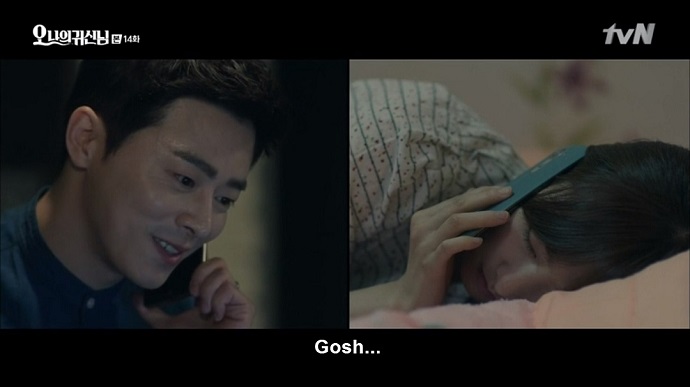 Bong Sun and Sun Woo also grew on me in this episode as a couple. Their scenes together were very cute with her growing confidence and his nervous tendencies: Sun Woo pretending not to be scared of ghosts as Bong Sun reassures him, Sun Woo’s amusement at Bong Sun passing out over the phone, and Bong Sun giving Sun Woo advice on how to find inner peace.

Though Sun Woo appears to have chosen Bong Sun, I am glad that he acknowledged that he initially fell for Soon Ae. Frankly, it reflects what viewers probably felt about the hilariously inappropriate Soon Ae. Sun Woo is nervous and overly formal around Soon Ae, because they shared intimate moments together. I hope that Sun Woo and Soon Ae will have the opportunity to speak with each other honestly and resolve their issues before the end of the series.