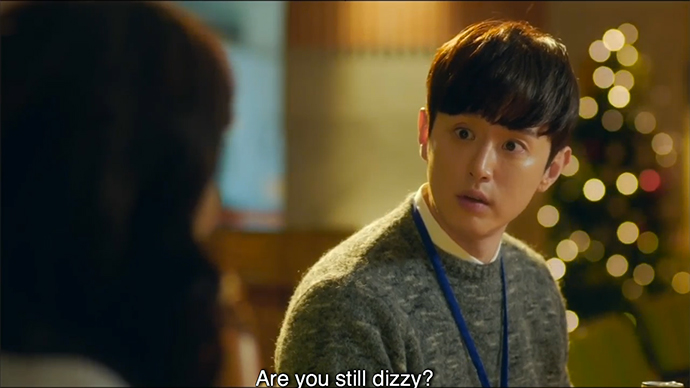 I’m not sure what the Joseon-era opening sequence has to do with the spontaneous love confession by Mi Mo (Jang Na Ra) to Hae Joon (Kwon Yool) in an emergency room, but I guess it doesn’t matter. Back in the present, Hae Joon is shocked enough to wonder if Mi Mo’s still sick.

Luckily, Hae Joon’s saved from having to respond by the arrival of Mi Mo’s friend, Dong Mi (Yoo In Na), who not only beats her for seemingly going insane, but tries to tear off the lab coat she’s wearing, pausing only when she discovers that Mi Mo is wearing lingerie underneath. Humiliated, Mi Mo turns back to Hae Joon, only to have him walk away.

Later, Soo Hyuk (Jung Kyung Ho) bursts into the emergency room, but Mi Mo is already gone. Instead, Hae Joon berates him for leaving his wife to be picked up by someone else. Soo Hyuk explains the circumstances behind their drunken “marriage”, and adds that he has no relationship with Mi Mo whatsoever. Hae Joon is skeptical, since Soo Hyuk came to get her from the emergency room in the middle of the night.

Mi Mo, meanwhile, beats herself up for acting crazy in front of Hae Joon. Hae Joon, meanwhile, remembers the moment when he first saw her, and pictured her as an angel. Soo Hyuk, meanwhile, comes home to memories of their drunken flirtation in the elevator. 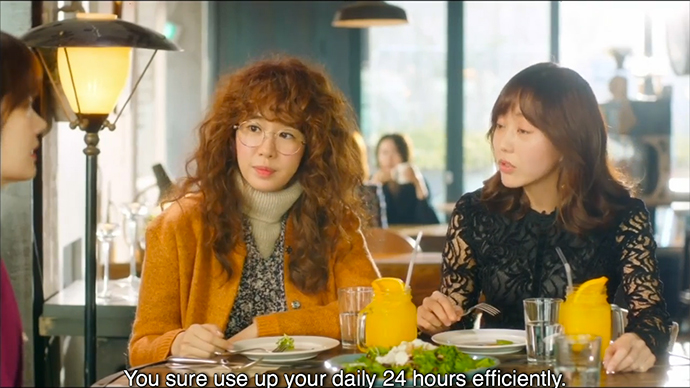 The next day, Mi Mo disguises herself with a headscarf and sunglasses (wouldn’t that make you more noticeable?) to spy on Hae Joon at the hospital. Later, at lunch with Dong Mi and their other friend, Da Jung (Yoo Da In), Mi Mo confesses her plan to remarry, to Hae Joon. Da Jung is skeptical, but Dong Mi is actively angry that a divorced woman would attempt to dip into the pool of unmarried men reserved for single women like her. Dong Mi tells the story of a divorced colleague stealing away the man she had her eye on.

Back at the office, Mi Mo is approached by the perfect client, a well-maintained career woman with property and no children. Mi Mo instantly offers her a discount, and we get a glimpse into the criteria behind the matching process that places someone like this new client at the top (hold in your surprise, but money and looks put you higher on the list). Mi Mo’s efficient workday is interrupted by a call from the magazine reporter, who asks for an update on the impending proposal that Mi Mo had bragged about earlier. On a roll with bad decisions, Mi Mo confides in the reporter about her horrible breakup and asks her to splash the news about her ex’s bad behaviour all over the magazine.

Mi Mo’s friend, Ae Ran (Seo In Young), meanwhile, breaks the news of the cancellation of her wedding to her mother, who tells her to get married and then, divorce. Later, her fiancé, Dong Bae (Park Eun Seok) proposes a similar arrangement, then cleans up the mess her mother left. Ae Ran wonders why her heart won’t flutter for such a great guy.

Meanwhile, Mi Mo irons Hae Joon’s lab coat, and wonders how to explain the situation to him so that he won’t think she’s crazy. Unable to think of anything, Mi Mo decides to consult with Soo Hyuk. When they meet outside, Soo Hyuk is perturbed to find Mi Mo shotgunning beers, since alcohol has already gotten them into so much trouble. Mi Mo is unable to ask Soo Hyuk for help, but unprompted, Soo Hyuk tells her that he’s already cleared up Hae Joon’s misconception that they’re married. A happy Mi Mo carries on drinking.

Dong Mi gets a call from the colleague who “stole” the man she was interested in, and is horrified when her colleague asks Dong Mi to be her bridesmaid. When Dong Mi refuses, the colleague sweetens the deal by telling her about a place that will guarantee Dong Mi a man. 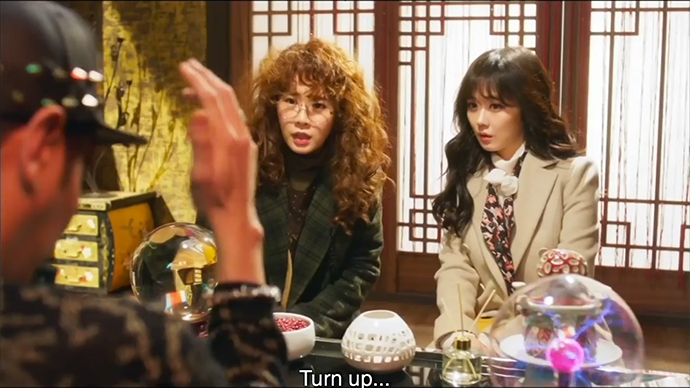 The place turns out to be a hip hop fortune teller (I’m sure this is a cameo, but I can’t identify the guy), who asks for $50,000 to find her a husband. Before Dong Mi has a chance to make up her mind, a screaming woman comes running in to the office, and accuses the fortune teller of setting her up with a stalker. Dong Mi decides to make herself over instead, with mixed results.

Mi Mo works up the nerve to go back to the hospital and return Hae Joon’s lab coat. When she tries to make a move on Hae Joon, Mi Mo gets a flat out ‘no’, since he doesn’t like love triangles (you’re my hero, Hae Joon), and doesn’t find her attractive enough to endanger his friendship with Soo Hyuk. As Mi Mo leaves, Hae Joon’s colleague, Yeon Soo (Hwang Sun Hee) shows up to point out to Hae Joon that Mi Mo has aged since her days with the girl group, the Angels.

In the meantime, Soo Hyuk submits his story about Mi Mo’s ex-boyfriend, superstar chef, Jung Hoon, and famous actress/former member of the Angels, Seul Ah (Sandara Park). In a meeting at the office, Soo Hyuk is ambivalent about the success of his article, but both his editor and photographer ignore him. Soo Hyuk’s colleague, who turns out to be the reporter who interviewed Mi Mo, asks him to go to dinner in a couple of days, and Soo Hyuk agrees without much thought.

Outside the apartment building, Soo Hyuk comes across Mi Mo, drinking after learning the details of her own breakup in Soo Hyuk’s magazine article. Soo Hyuk is apologetic, but when Mi Mo asks if Jung Hoon was happy with Seul Ah, Soo Hyuk has no idea. Further deflated, Mi Mo compares herself to a goldfish, always getting excited over something new and letting her feelings spill over. Soo Hyuk is the opposite, always keeping them inside. As if to illustrate, Soo Hyuk reaches to pat Mi Mo on the back, then stops himself. 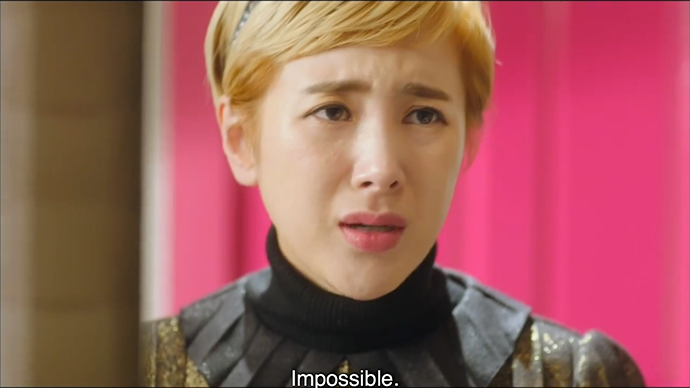 At school, Dong Mi ignores her class in favour of talking on the phone with Ae Ran. Dong Mi has no sympathy for Ae Ran, who hangs up on her in the end. Instead, Dong Mi takes the advice of one of her prepubescent students, who bakes cookies for her boyfriend. On the other end of the phone call, Ae Ran discovers that she’s pregnant. 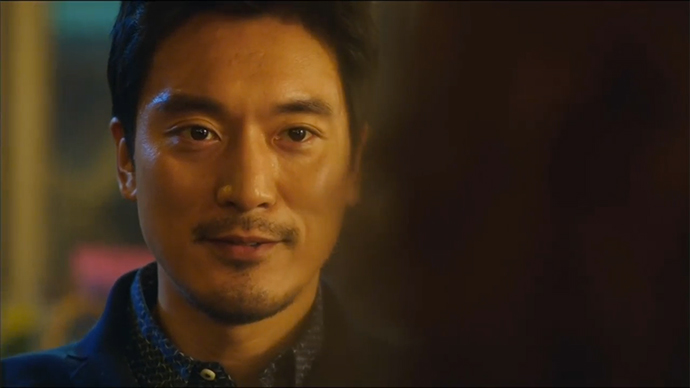 Dong Mi decides to buy an oven online, only to discover that the seller is a super hot guy (a cameo by Kim Min Joon). She discovers that he’s divorced, and later, when Mi Mo comes over to hang out, asks what topics she should avoid with divorced guys. Mi Mo’s only advice is not to ask about the reason for the divorce.

Soo Hyuk meets up with Hae Joon in a café, where Hae Joon gets straight to the point: he’s met the woman who’s his ideal type and it’s Mi Mo. He want to know if Soo Hyuk has any feelings for her that would cause a love triangle. When a surprised Soo Hyuk confirms that he doesn’t, Hae Joon tells him that he’s going to Mi Mo’s company as a client, so that Mi Mo can learn about him, and that he intends to date her. Soo Hyuk looks distracted as Hae Joon leaves. 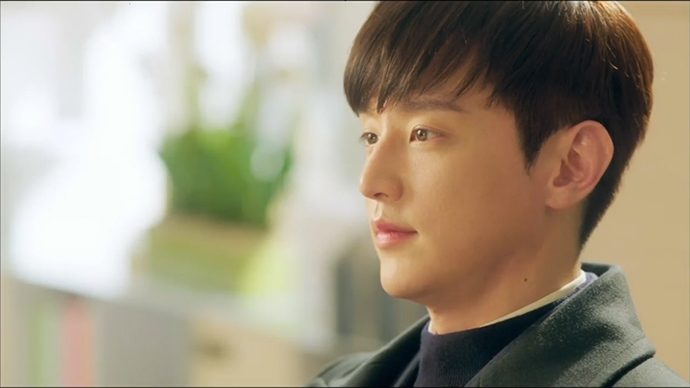 Back at the office, Mi Mo sees off another successful couple, before the big entrance of Hae Joon. Mi Mo is nervous as she tries to help him out, but Hae Joon is succinct in his requirements, that he’s looking for a woman who’s been through a lot, but is pure. Neither I, nor Mi Mo are sure of what he’s talking about, and I really have no idea what’s going on as he stares her down, then reprimands her for staring at him. Hae Joon abruptly gets up to leave without signing up and a flustered Mi Mo angrily goes through his profile.

Soo Hyuk is at dinner with his colleague at a fancy restaurant. His colleague is disappointed to find that Soo Hyuk is distracted, but declares her feelings for him regardless. Soo Hyuk rejects her and they part, but Soo Hyuk can’t stop thinking about Hae Joon and Mi Mo.

As Soo Hyuk drives home, he tries to call Mi Mo, but Mi Mo is waiting in Hae Joon’s lobby (to ambush him?). When Hae Joon comes downstairs, she tries to convince him to sign up for her remarriage service, but he resists, then finally tells her that he’s interested in her rather than the agency. Soo Hyuk comes running up to the lobby, just in time to see Hae Joon hug Mi Mo.

I know this is pretty common in K-dramas, but how is it romantic to be yanked forward into a hug? Does the man not have feet? Can he not step forward himself?

Leaving that aside, what the hell is with Hae Joon? Sure, I was hoping we weren’t going to get a love triangle, but now that we are getting one, can Hae Joon not act like an ass about it? Instead of jerking Mi Mo around to make sure that she’s interested (which he already knew, since she confessed her love and he bluntly rejected her), Hae Joon could have just asked her out. Mi Mo, your girlfriends aren’t doing right by you. Hae Joon may or may not be out of your league (ugh), but he’s been acting like a jerk so far, and you should stay away.

Speaking of Mi Mo, seriously I’m getting whiplash from her back-and-forth love life. Three episodes in, and she breaks up with one guy, almost drunkenly marries another, and then confesses to a third in a total of three days. Yes, she herself admits that it’s odd, but even so, it comes off as either desperate or insanely fickle. Will there be a fourth guy in the next episode or have we settled down now?

Going back to my comments from the last episode, I prefer this show when Jang Na Ra and Jung Kyung Ho are in full flow together. When the comedy peters out, it gets a lot less entertaining. Hopefully, we’ll get more of that in the next episode.