Side dish: Maybe this episode left you with a bit of a sweet tooth? If you’re ambitious, here’s a recipe for znoud el sit from Hadia’s Lebanese Cuisine to satisfy your sugar craving. Alternately, if you’re lazy and near a Lebanese bakery, maybe just go buy some.

Despite Eun Chan’s pleas to let her stay on at the coffee house, Han Gyul fires her. Mr. Hong leaves the coffee house in a huff over the drama while Min Yeop and Sun Ki can watch on sadly as Eun Chan clears her locker. 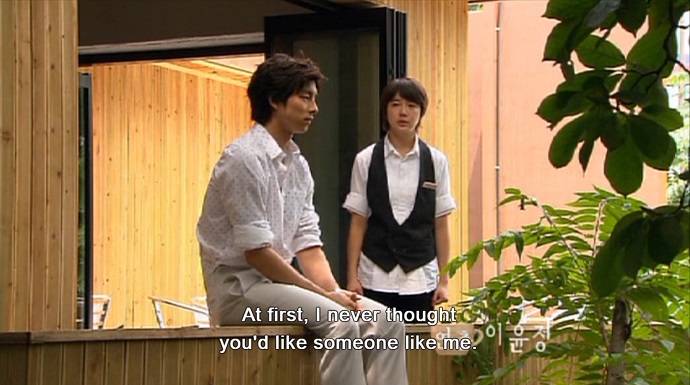 As Yoo Joo prepares to leave for New York and her ex, DK, both she and Han Seong attempt to mend the rift between Eun Chan and Han Gyul. Han Seong confesses to liking Eun Chan, but insists that Eun Chan already had feelings for Han Gyul. Yoo Joo maintains that nothing happened between Han Seong and Eun Chan.

Yoo Joo admits to Han Gyul that she cannot tolerate the idea of Han Seong having feelings for someone other than her. Han Gyul gives his cousin credit for always trusting in Yoo Joo, and asks her not to leave Han Seong. 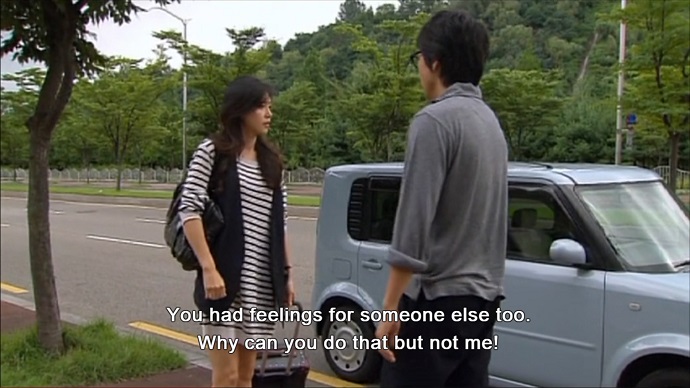 Yoo Joo receives a ride to the airport from Han Seong, but when he attempts to pressure her not to leave, she orders him to pull over. On the street, Han Seong rails against how unfair it is that she was allowed the stray while he cannot even have feelings for another.

Yoo Joo arrives at the airport by taxi, then cannot bring herself to leave with DK who promptly departs without her. Han Seong rushes into the airport, but believes Yoo Joo has already flown to New York.

Han Seong comes across Eun Chan stuffing her face outside a convenience store. He reassures her that Han Gyul has feelings for her, but advises her to keep their kiss a secret from Han Gyul. Eun Chan notes how rough Han Seong looks, but he refuses to talk about his troubles. 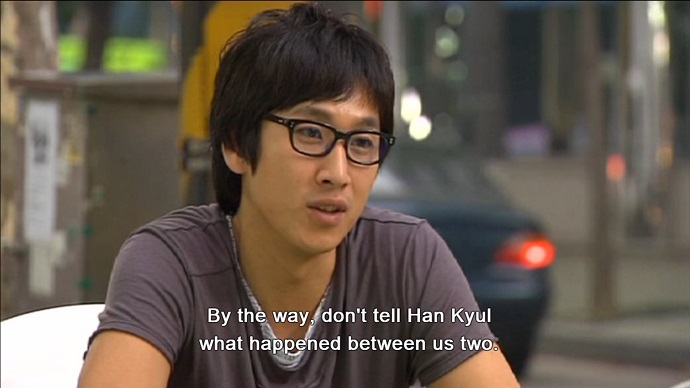 Han Gyul is getting advice on all sides to forgive Eun Chan. He goes to visit Han Seong who asks him to overlook his feelings for Eun Chan the same way he ignored Han Gyul’s feelings for Yoo Joo. Han Gyul apologizes for punching Han Seong, and for chasing Yoo Joo for the past nine years. When Han Seong reveals that Yoo Joo has left Korea, Han Gyul insists that Yoo Joo will return.

While Han Gyul mopes outside Eun Chan’s house, she sits outside his apartment. Walking her bike away, chestnuts fall from a hole in the bag off the back. Han Gyul finds the trail of chestnuts when he returns home, and follows them. Eun Chan discovers the leak, starts retrieving the fallen chestnuts, and finds herself face-to-face with Han Gyul collecting chestnuts in the opposite direction. He lightly reprimands her for her carelessness. 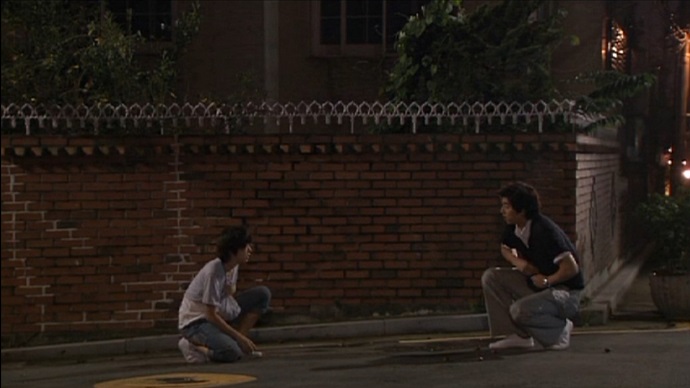 Sitting together in the park, Han Gyul asks Eun Chan to return to the coffee house. Eun Chan cries and apologizes again. Han Gyul apologizes for not considering how difficult it was for her, places his head on her shoulder and confesses to being glad she’s a girl. Eun Chan sneaks in a kiss.

The next day, Eun Chan and Mr. Hong are both back at work. Though Han Gyul acts indifferent, his employees suspect that he and Eun Chan have made up. They mischievously text him using her cell phone to confirm. Later, Han Gyul takes Eun Chan out on a coffee bean delivery run. While he still enjoys pulling pranks on her, he also happily announces to passing strangers that she is a girl. 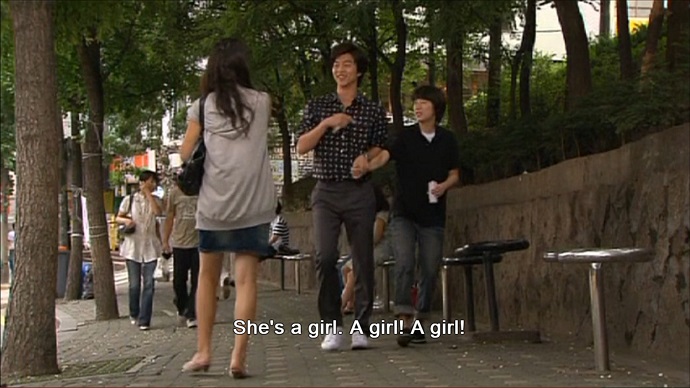 Han Seong is unable to reach Yoo Joo at her New York number, and learns from DK that she never boarded the plane. Han Seong shares his fear with Han Gyul that something has happened to her.

Eun Chan takes Han Seong’s advice, and never reveals kissing him to Han Gyul. To prevent further grilling by Han Gyul, Eun Chan simply tells him that she loves him. Han Gyul knows she is trying to change the topic, but tells her that he love her, too.

Junggugeo Kaenada 중국어 캐나다: Well, that was resolved quickly! After all the drama and tears of episode 11, who would have thought that Eun Chan and Han Gyul would melt into a puddle of love by the end of episode 12?

Only 만: Well, we always knew Han Gyul would forgive Eun Chan, but I did imagine that it would take more than one episode. But, to paraphrase Han Seong, once Han Gyul gives his heart, he gives it wholeheartedly; he just couldn’t live without her.

Junggugeo Kaenada: Plus, the pressure was really on from everyone to forgive her. I enjoyed Mr. Hong’s exasperation with Han Gyul’s stubborn refusal to forgive Eun Chan. He just upped and left, saying he’ll be back in a month when Han Gyul is gone.

Only: The entire Coffee Prince crew seems to be on Eun Chan’s side. Sun Ki even angrily defended her to Ha Rim, which was great because Kim Jae Wook looks super hot when he’s angry.

Junggugeo Kaenada: Too bad Han Seong did not have a chorus of supporters to back him up in his bid to get Yoo Joo to stay. She’s really comfortable using ex-boyfriends even while she’s breaking up with them. I can’t believe she accepted a ride to the airport from Han Seong to meet up with her other ex-boyfriend, DK. She is the worst.

Only: But she couldn’t go in the end. I think Han Seong had it right when he pointed out to Han Gyul that their connection had lasted ten years already. As dramatic as that scene was, he knew on some level that she wasn’t really ending things.

Junggugeo Kaenada: Eun Chan and Han Gyul couldn’t quit each other either. They were loitering outside each other’s homes then were brought together by a trail of chestnuts. Did you enjoy that?

Only: That was pretty cute. And it led to Han Gyul telling Eun Chan that he couldn’t live without her, which made my head explode into hearts and flowers.

Junggugeo Kaenada: His giddy announcements to strangers that Eun Chan was a girl were pretty adorable. There’s that Gong Yoo magic at work again.

Only: And we even ended with a mutual confession of love, much to the surprise of both of them. The expression on Han Gyul’s face when Eun Chan blurts out that she loves him was as swoonworthy as it was hilarious.

Junggugeo Kaenada: For once, characters decided not to unload an unpleasant truth bomb to unburden themselves. It appears that Eun Chan and Han Seong will take their secret kiss to the grave, which I commend them for.

Only: I commend them for not confessing about the kiss to Han Gyul just to make themselves feel better, but actually Han Seong is the only one who has something to confess; he’s the one that kissed her. And Yoo Joo’s reaction already told him everything he needed to know about the idea of confessing.

Junggugeo Kaenada: Regardless, There seems to be hope for Han Seong and Yoo Joo by the end. She’s missing, but at least, she’s not with DK.

Only: Maybe they need a trail of chestnuts to reunite them too?